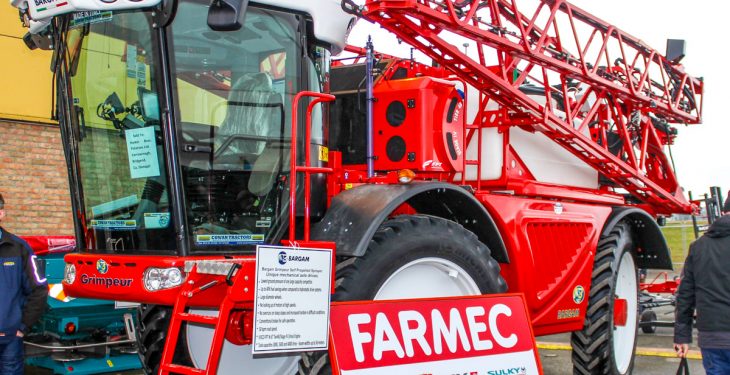 The model at the show, a Grimpeur 3500, boasts a capacity of 3500L and 28m-wide booms. Farmec says that it has “the lightest footprint of any large-scale self-propelled sprayer on the market”.

It’s powered by a 6-cylinder FPT engine, with a rated output of 205hp and a maximum figure of 224hp.

With a “comprehensive” GPS system, this machine lists at about €200,000 excluding VAT.

According to Garry Daly, Farmec Ireland Sales Director, the Grimpeur has mechanically-driven axles, rather than hydrostatic wheel motors. This, he says, means that it is better suited to Irish applications, where sprayers might have to drive long distances on the road – travelling from a home farm to rented ground, for example.

He says that hydrostatic wheel motors are fine in instances where sprayers work on large, ring-fenced farms. In those scenarios, he says, sprayers don’t have to tackle long road journeys on a regular basis.

While the Grimpeur does not have hydrostatic wheel motors, it is fitted with a Danfoss hydrostatic transmission (plus two mechanical speed ranges), to enable the operator to fine-tune working speeds in the field.

Like other Bargam sprayers, the range-topping Grimpeur is fitted with Annovi Reverberi (AR) piston diaphragm pumps and ARAG controls.

Farmec Ireland has been involved with Bargam for over a quarter of a century. Bargam is based at Imola in the northern part of Italy and claims to be one of the largest manufacturers of sprayers in Europe.

The company has two factories and also supplies a large number of booms and boom kits to other sprayer manufacturers.

The company has been building sprayers for over three decades and now exports to 40 countries all over the world. More than 2500 Bargam sprayers, mostly tractor-mounted units, have been sold in Ireland over the past 25 years.

Bargam’s tractor-mounted sprayers come with manual and hydraulic booms; with working widths of up to 20m and 30m respectively. Tanks capacities stretch from 200L to 1600L.

The self-propelled models have tank sizes ranging from 1300L to 5000L; working widths stretch from 15m to 42m.

Agriland spoke to Garry Daly at the recent 2017 FTMTA Farm Machinery Show in Co. Kildare. He spoke about the outlook for the Irish machinery trade in 2017.

On the topic of sprayers, he also issued a note of caution to anyone buying a sprayer, with regard to testing, CE marking and machine compliance.

For more, watch the video below…