Home » Environment » Can Brexit be a good thing for the environment?

Can Brexit be a good thing for the environment?

The National Farmers’ Union (NFU) has teamed up with Greener UK, a coalition of 13 environmental organisations, to demonstrate how a Brexit deal can work for both farming and the environment.

NFU President Minette Batters and Greener UK chair Shaun Spiers argue in a joint statement that there must be free and frictionless trade between the UK and EU, and that a ‘cliff-edge’ Brexit could bring farms to the brink of collapse.

The statement read: “For better or worse, over the last 45 years, the EU has played an unarguably important role in the way we manage our landscape, firstly through the Common Agricultural Policy and latterly through the Single Market’s role in environmental regulation.

“Now, as we prepare to leave, questions about how we continue to manage our countryside are stimulating an important, and sometimes controversial, debate.”

‘Framed as a conflict’

They also pointed out that producing food from the land and caring for the environment have all too often been framed as being in conflict while acknowledging that agriculture’s impact on nature and the countryside has, at times, been damaging.

They continued: “However, we are now in a position where we not only have a far better understanding of the scale of the problem, but also have many of the solutions to address issues such as declines in some farmland birds and poor water quality.

“In recent decades, many farmers in the UK have taken ownership of these environmental challenges and taken steps to address them, delivering real results for nature.

“Farmers are getting better at exploring innovative techniques as well as rediscovering lost expertise that can help them to provide not only a safe and affordable supply of food but also healthier soils, cleaner waterways and more abundant wildlife.

“We must ensure this good work is maintained, particularly where nature remains in decline and landscapes continue to be damaged. But it is not a straightforward challenge.

There are still uncertainties as to how we best manage our land both for food production and for the public goods the market won’t pay for. We also know that farmers and environmentalists won’t always agree on the best ways of doing so.”

The NFU and Greener UK are united in their view that one of the fundamental pieces of the “green Brexit” jigsaw is a settlement with the EU that maintains as free and frictionless trade between the UK and EU as possible.

Anything short of this runs the risk of the sort of disruptive “cliff-edge” Brexit that could bring many farms to the brink of collapse, and which would make it harder for farmers to deliver the public goods that it is expected to deliver. 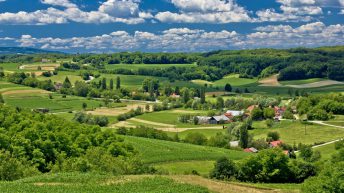