‘Calf health is a good measure of calf welfare’ on farms 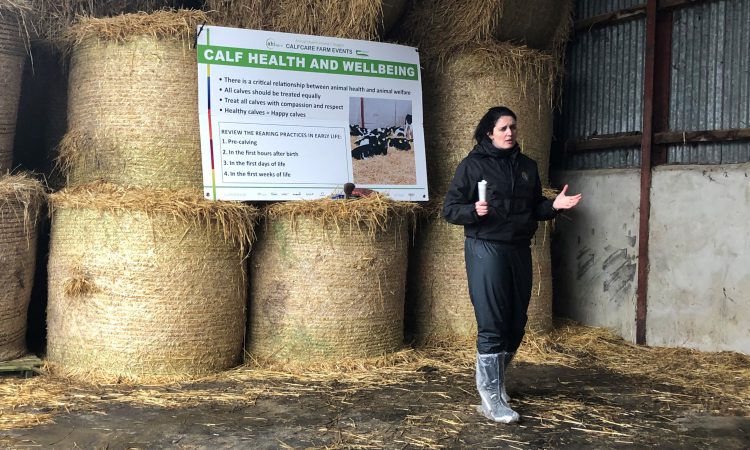 “If you looked at defining welfare on farms, you would hear things like freedom from hunger, freedom from discomfort, those kind of words.

“When in actual reality, anybody who rears calves is doing so much more than any kind of minimal legal standard. We have to, to rear the calf and keep the calf alive.”

This was the message from European specialist in bovine health management, Catherine Carty who spoke on the last day of the Animal Health Ireland (AHI) and Teagasc calf care events last week.

During her presentation, she said that there is a “critical relationship” between animal health and animal welfare.

She commented: “If we were to say what is your measure of quality like, you would be able to answer with ‘well my bulk tank somatic cell count (SCC) is, or I treat this many for mastitis in a year, etc.

However, it is more difficult to put a metric around calf welfare.

Continuing, she outlined what the kind of things that would be measured are, if we had to measure it in the case of an audit or something like that.

She said: “Things like environmental or animal-based measures of welfare, passive transport – which a lot of people monitor now – and growth rates would be measured.”

Animal-based measures of calf welfare, she said, are things like morbidity (how many we treat for pneumonia or scour from birth to weaning) and calf mortality – which she said we have to record and which you tend to remember anyways because it is hard to forget dying calves.

“Whether they are formally recorded or not, those are actually all measures of calf health which you are all invested in doing,” she highlighted.

“Morbidity and mortality, I think they are useful to note. There is no such thing as a target because we certainly don’t want any dying calves, but less than 3% some would be aiming for.

Over 5% and we are starting to think about some of the factors that might be driving that.

In terms of morbidity, she said there is also no such thing as a target. “But we want to treat as little as possible; although we have to treat as many calves as need to be treated,” she said.

The target is somewhere around 10%, she noted.

“Treatment cases and numbers dying are just a metric, and they are a starting point, but actually the calf welfare story is so much more than just that,” she added.

Finally, Catherine finished her discussion with an example of a farm that had an outbreak of cryptosporidium.

She said: “I should point out that this was an excellent herd; nothing out of the ordinary, lost a few calves every year, but nothing extreme.

“However, an outbreak occurred and they lost 30% of their calves in one year.

Just to point out, if we were using mortality as a measure of welfare that would not be a good reflection on that farm. But it was just a bad year and a few circumstances lined up that made it worse than it would be.

“The department flagged that farm because of the high mortality rate but the vet couldn’t even keep any of the calves alive no matter what he did and the farmer was at his wits’ end,” she explained.

In this scenario, it was the quality of colostrum that was the issue. They made some changes to the collection, storage and feeding of colostrum and the following year morality rates dropped.