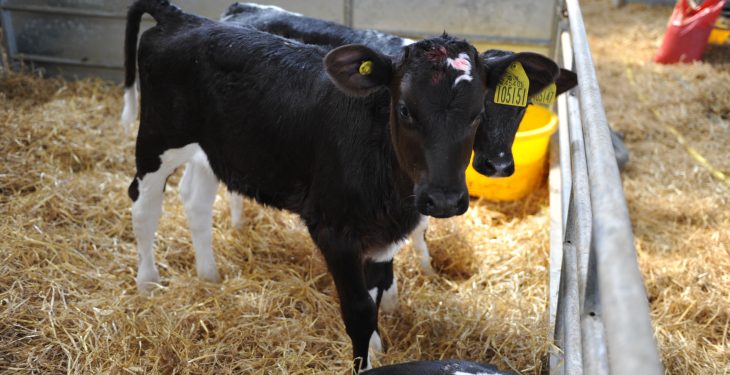 Calf nutrition, health and environment are all critical to achieving an optimum lifetime performance of a dairy replacement heifer.

That is according to College of Agriculture, Food and Rural Enterprise (CAFRE) Senior Dairying Technologist Martin Mulholland. He said replacement heifers being reared for CAFRE’s herd are bred to produce approximately 40,000L of milk over their lifetime, whilst minimising environmental emissions.

During trials, CAFRE has improved cow health and increased productivity through high quality housing for the dairy herd.

Housing such as the ‘Calf Igloo’ gives the calf the choice to seek shelter from the cold and draughts. Alongside the veranda system, this has been evaluated at Greenmount campus over the last six months.

Some 14 calves were reared in the igloo and veranda at any given time between early February and late May. Temperature and humidity were tracked by sensors, and incidence of disease, straw use and animal behaviour were also recorded.

Humidity was also 3.5 % lower in the igloo than in the exercise area and 2.9% lower than in the current indoor housing.

According to CAFRE, the above results suggest that “natural stack ventilation is occurring within the igloo with calves”. This result was supported by the use of smoke pellets, which clearly showed smoke rising through the ventilation outlets at the top of the igloo.

Mulholland said that mean live weight gain (LWG) from birth to weaning of calves reared in the igloo was 0.71kg per day, with calves weaned at 58 days on average.

No incidence of pneumonia was recorded against calves reared in the igloo.

Having visited different farms that rear calves using the igloo system in the UK, CAFRE is planning on building a new calf-rearing facility. It will be based on the igloo concept in an effort to address the key design issues listed below: