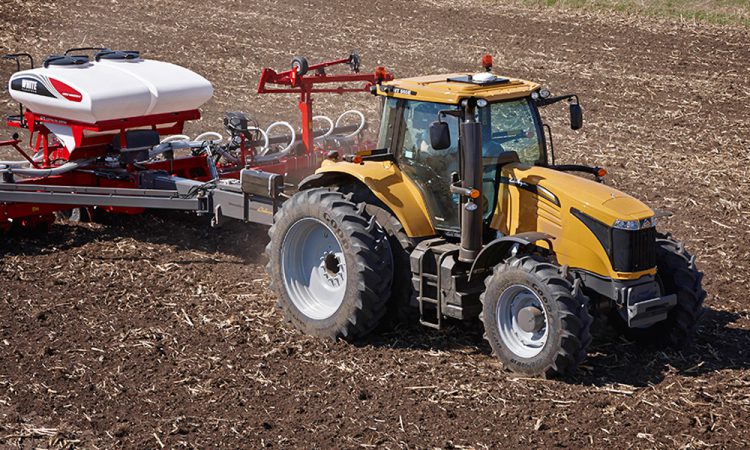 Challenger is AGCO’s fourth biggest tractor range, but its future as the company’s flagship brand in North America appears to be in some doubt over the long term.

AGCO has long been a master of brand management – it lies at the very heart of the company’s formation back in the early nineties.

At the time, the machinery industry was in turmoil with manufacturers seemingly being traded daily among the big players while familiar names faded forever.

From this melee emerged the present parent corporation with Massey Ferguson, Fendt, and then Valtra, as its main tractor lines.

Fiat indulged in its own game of corporate acquisitions, resulting in CNH, while the third giant, John Deere concentrated on growing organically.

Lurking on the sidelines was another large machinery presence in the shape of Caterpillar.

Caterpillar and John Deere had enjoyed a love-hate relationship over the years, each eyeing up the other’s core business, while often sharing the same dealers.

Caterpillar made its move into the agricultural sector with its range of rubber-tracked machines in 1986.

In 2002, it decided to refocus on the construction sector and sold the Challenger name to AGCO who enlarged the line up with wheeled models from Massey Ferguson and Valtra’s Brazilian factory.

Thus, we come to the present situation of AGCO tractors being sold through Caterpillar dealers into a market dominated by the big green giant, known as John Deere.

Naturally, AGCO would wish to enlarge its share of this important market and it appears that its plan is to step back from the Challenger brand and push Fendt instead.

The Challenger name has already been withdrawn from Europe and the Middle East, its future in America now looks more uncertain than ever.

The latest move by AGCO is to switch to a ‘retail orders’-only business model for Challenger tractors.

That is to say that a customer has to place an order before the factory will ship the machine.

One effect is to eliminate stocks of tractors accumulating in dealers yards, another is to put them on notice that the landscape is rapidly changing.

This comes after the a major recruitment drive by Fendt, which has doubled the number of dealerships over the past couple of years.

The company has also pointed out that it has invested €1bn in the business over the past 16 years and now has a manufacturing capacity of 30,000 units, and that capacity is only two thirds utilised.

All this would appear to herald a new chapter in the ongoing war for sales in North America.

AGCO is squaring up to John Deere (CNH is rarely mentioned in dispatches) and, according to trade rumours, John Deere is taking the threat very seriously indeed.

Fendt happily promotes the idea that it builds a high-quality machine with a price tag to match, as does John Deere.

AGCO, has firmly parked its tank on John Deere’s lawn and the Challenger brand is likely to be a casualty of these latest manoeuvres.

If the battle for the John Deere heartland is being addressed by Fendt, then Challenger would appear to have little purpose.

This view is already being acted upon by many Caterpillar dealers who are hiving off their Challenger activities into separate companies, or simply selling them on.

Ripples from across the pond

So what does this mean for the European farmer, particularly those in Ireland?

On the face of it, there will be little change.

However, if Fendt comes to be seen as a natural alternative to John Deere in America then the knock-on effect may see them taking sales from John Deere here in Ireland as well.

There is also the question of digital management of machines, both on the local and macro scale.

AGCO has nailed its colours firmly to the ISOBUS/Agrirouter mast whereas John Deere is ploughing its own furrow, taking only Claas along with it out of all the major manufacturers.

Tractor-implement compatibility is likely to become of ever greater importance in the years ahead.

Implement manufacturers will be taking note of market trends and should they see ISOBUS-equipped tractors edging out other systems, then that is where they’ll go as well.

This could, conceivably, affect both market share and secondhand values of tractors, such as John Deere, not engineered for ISOBUS.