Cheddar remains the ‘big cheese’ with UK consumers – but continental varieties are taking a large slice of the market as popularity for the exotic continues to grow.

With over a third of consumers viewing soft continental cheeses, such as Brie or Camembert, as good for special occasions, sales rose by 6.4% in the first half of last year.

Luckily, cheese-lovers don’t have to look too far from home to satisfy their taste-buds with the UK now producing over 700 different varieties of cheese – more than France and Switzerland combined.

This hunger for more exotic flavours could provide further opportunities for the dairy industry, according to a new report from the Agriculture and Horticulture Development Board (AHDB).

It reveals that Cheddar continues to be the nation’s most popular cheese, accounting for around half of UK cheese sales – with 86% of households purchasing it in the three months to October 2018, according to Kantar Worldpanel.

However, sales of this great British favourite has failed to keep pace with the overall market over the past year.

Whatever your preference, what’s clear is that despite calls by a minority to reduce dairy intake, cheese is considered a staple food in the UK. According to Mintel, nearly 90% of consumers eat cheese every month and two-thirds eat cheese at least twice a week.

According to Kantar Worldpanel, almost 99% of the population bought cheese at least once in the 52 weeks to July 2018, with value sales up 3.7% during this period, making it a strong year for cheese.

Amey added: “Great Britain is well-known for its Cheddar production, but as the Great British cheese board has evolved to a more continental scene, so too has UK cheese production.

“While our own beloved British Cheddar looks set to stay, the hunger for more exotic flavours could provide further opportunities for the production of more continental-style cheeses and a boost for the territorials.” 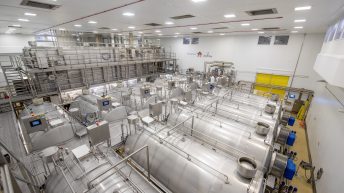