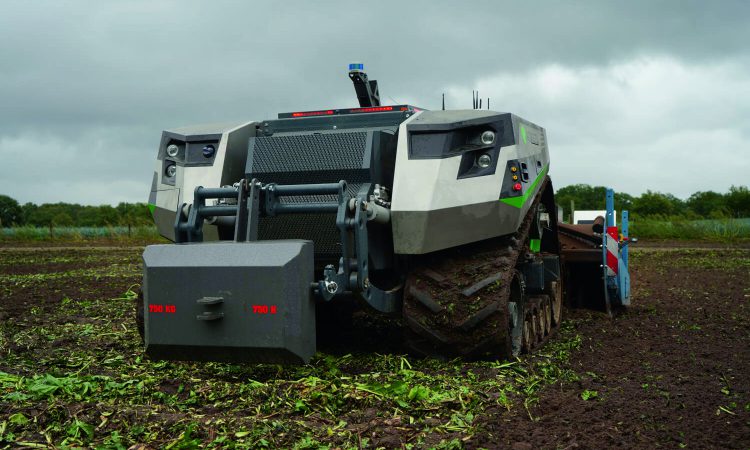 The new company has developed a tractor designed to be autonomous from the ground up, rather than try to adapt existing machines, or create smaller robots dedicated to a limited range of tasks.

AgXeed’s pilot machine is a diesel hybrid powered unit on tracks which uses a suite of software which, the company claims, is easily scalable.

Like many small technology start-ups seeking to gain a foothold in the machinery market, the company also points to the product as being part of a larger system rather than just another way of performing standard tasks

Unlike other ventures, the tractors do integrate more fully with present farming practices. They are equipped with three point linkage and are built “to assist farmers with a wide range of tasks in the future”.

The vehicle also features an adjustable track width, load-sensing hydraulics and a linkage with a lift capacity of up to 8t.

An electric PTO, independent of the engine speed, and external high-voltage connections are optionally available.

The emphasis of the design is very much on reducing damage to the soil. Various track configurations will be available and a maximum weight of around 6t is envisaged for the machines.

The partnership between the two companies is a “win-win” situation according to Claas. The mainline manufacturer notes that it will gain access to the innovative technology behind full-sized robotic tractors.

AgXeed benefits from the established expertise of Claas in areas, such as data transfer, interfaces and drivetrain technology.

AgXeed believes that “in Claas we have a partner on board that believes in, and shares our ideas on the future of agriculture”.

Known as ‘AgBot’, the new brand of autonomous tractors, and the associated software and platforms, are expected to be launched in 2020.

They will be available in various sizes and performance classes. Further models are currently under development according to both companies.