Classic corner: 1990s Lamborghini back to its former glory in Co. Fermanagh 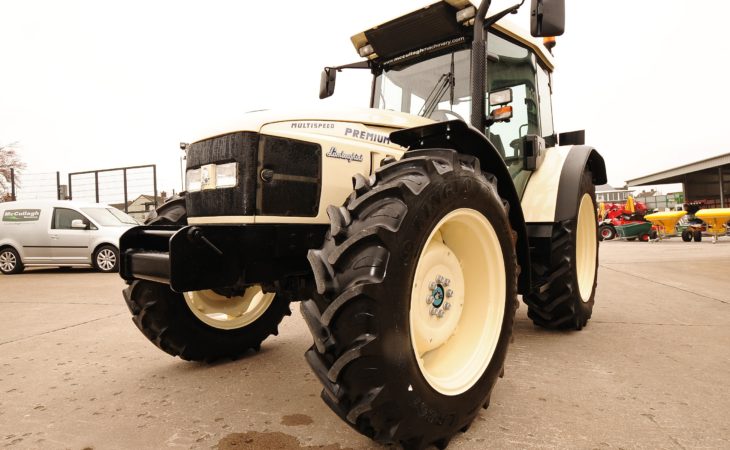 The difference between Lamborghini and Same is often considered to be no more than the colour scheme.

That’s an understandable position, as the ranges were gradually merged from the time of the purchase of Lamborghini’s tractor business by Same in 1973.

Both marques are associated with air-cooling and both carried the Italian flair for styling, which only compounds the impression. This, however, is something of a misconception; beneath the bonnet there were often differences that set the two apart.

One particular division between the two occurred in the late 1990s, with the launch of the Lamborghini ‘Premium‘ line-up. These tractors were distinct from their power-equivalent Same counterparts, due to having water-cooled engines rather than air-cooled units.

It was becoming obvious at the time that air-cooled tractors would be unlikely to meet emissions limits; the Same group appeared to be hedging its bets by producing both – during the transition period of the late 20th century.

Despite the difference in cooling methodologies, the engines remained faithful to the long-stroke dimensions of a 105mm-bore and a 115.5mm-stroke.

This formula meant each cylinder was of 1,000cc-displacement; each engine based around this standard cylinder size was designated a ‘1000’ model.

They were differentiated simply by the number of cylinders and type of cooling. Hence, the naturally-aspirated, six-cylinder unit in the 105hp Premium 1060 was known as the 1000.6W. In addition to this, the turbo-charged models would have a ‘T’ suffix as well.

The introduction of the Lamborghini Premium range also saw independent fuel pumps for each cylinder being fitted. Same/Lamborghini had always dissented from the normal practice of simply bolting on a rotary or in-line pump from a specialist manufacturer.

Instead, it had taken the route of running a separate shaft alongside the engine, which would turn one or two block pumps (depending on the number of cylinders).

This idea was taken to its logical conclusion by dividing the pump up completely into its individual units – one for each injector – although an element of electronic control was also present in the new Premium models.

Other notable features of these tractors were the oil-immersed disc brakes in the front axle and the various transmission options.

The standard gearbox was a 20F 20R unit but, for those prone to acute bouts of ratio anxiety, a three-speed powershifter could be specified; it offered a 60F 60R configuration. This was a considerable tally. A halfway house (40F 40R) was also available in certain markets.

Unfortunately, the hydraulics were less impressive. The open-centre system provided just 58L/min. However, there was some redemption with the PTO arrangements; four speeds were touted.

The 1060 was at the top end of the Premium range. Unlike its four-cylinder brethren, it offered a 4.5t lift capacity (instead of 3.5t). A semi-automated headland management system (of sorts) was available as an option.

A ceramic clutch could also be specified. In addition it, of course, had the advantage of a six-pot motor.

It was, for its time, a tractor that could match its rivals on most fronts. It has gained a good deal of respect in certain quarters – for the strength of its engine in the field.

Lamborghini kept the Premium series in production from 1995 until 2004. This might suggest that the condition of remaining units is likely to be less than perfect. That is, of course, unless they have undergone a full, professional restoration.

This example (pictured) has. However, it was never intended as such; the project came about by accident.

The tractor was taken as a trade-in by McCullagh Machinery of Enniskillen last autumn. It was not the sort of machine that the company normally deals in, so Lloyd McCullagh was about to sell it on through the trade. However, a customer saw it in the yard and decided that it was the very tractor that he wanted.

At the time, it had already enjoyed a full engine rebuild but the panels were still in a “sorry state”. There was also some rust to be dealt with around the cab, although nothing about was “terminal”.

It was agreed that the dealer would repaint the panels but, as it was stripped back further, issues were found. Again, they were not major but to leave them as they were was to invite trouble further down the line. Besides, Lloyd is not happy to send out a tractor that is in less than “tip top” condition.

All the work was undertaken with the approval of the customer, until it got to a certain point where he decided that it had become too great an expense and backed out.

This left the company with a half-finished restoration project with no immediate market. The decision was therefore made to push ahead and finish the job to the high standard we see here.

All in all, Lloyd claims that €11,500 has been spent on the refurbishment – a figure that is quite believable given the quality of the finish and the tractor’s overall appearance.

Mechanically, it would appear as good as it looks; the only item still be to fixed is an interior light cover. It certainly fired into life (during our visit), with only the merest suggestion of engaging the starter motor.

There was no untoward sign of smoke or haze from the exhaust, which is not always the case with the air-cooled models.

The cab interior is as near to new as you are likely to find on a 20-year-old tractor. Not a spot of oil can be seen anywhere where it shouldn’t be.

It is as neat and clean a slice of that era as you are likely to find anywhere; it’s also a milestone tractor in the history of the wider Same group. 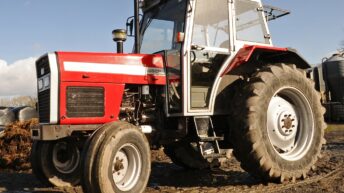 Classic corner: As good as it gets? No-nonsense workhorse can still earn a crust