A Co. Meath dairy farmer will increase cow numbers from 130 to 450 within the next three years and held an open day to highlight how the business has changed and will change into the future.

The open day was held as part of the Teagasc/Lakeland joint Dairy Farm Structures for Expansion event.

David Hannon is currently farming 95ha and milking 217 cows, this has increased from 130 cows in recent years.

According to Hannon, the farm will grow to 450 cows within the next three years and he said he has already approached a neighbour in relation to entering a farm partnership to bring the total area farmed to 137ha.

Hannon added that the process of expansion has had a negative impact on the profit/litre of milk produced, but insisted that his debt/cow has fallen.

“Profit per litre has fallen as a result of keeping additional replacement animals, I am currently keeping higher replacements then other farmers to build my herd size in the future,” he said.

The farm is currently carrying 58 replacement heifers, but Hannon added that only the best calves are kept and all stragglers are shipped off farm.

This is evident when the EBI of the herd is examined, the cows have an average EBI of €187, while younger stock have values of €225-248.

The farms current cost of production is 24.7c/L, with a purchased feed cost of €188/cow (0.5t concentrate) which accounts for 8.5% of output costs.

High milk solid volumes also produces an additional income of 3.5c/L on top of the base price received.

The herd is mainly Holstein Friesian animals, as Hannon is a strong believer in the EBI, but a few Jersey crosses can be spotted throughout the herd. “Both animals suit the farming system,” he said.

The expansion has also had an impact on the labour requirements on farm, according to Hannon. The farm currently requires Hannon and a member of staff along with some assistance from the family, and on occasion relief staff.

In recent years the farm has moved to be more labour efficient through using various techniques which include six-week calving and once-a-day calf feeding.

According to Hannon, the labour requirement will also shift in the coming years as he will become more focused on the day to day management of the cows, and fully intends to bring in contractors to carry out all the tractor work.

The farmer also highlighted how he manages in spring, particularly in February when almost 200 calves are born on farm.

“I used to have CCTV cameras to check the cows at calving, but to be honest, I don’t have a clue where there are at the minute.

“I check the cows at 9pm and again at 6am, I would want to be really sure that a cow was going to calf to justify getting up in the middle of the night. We have lost very little calves since we moved to this system.”

He added that the real problem occurs with the later calving cows, as he finds that checking 2-3 cows takes up a lot more time when he should be focusing on his grassland management and running his business.

The farm has also implemented once-a-day milking during the month of February and Hannon added that this allows him to make the best use of his time during this busy period.

His working hours are quite similar to a business in ways, which is essential to ensure future profitability.

Hannon highlighted that he tries to finish his working day before 6pm after starting at 7am. This means that the first clusters are put on at 4.30pm and everyone is out of the yard by 6pm.

Recent changes to the milking at weekends have also been beneficial, he said, with the milking being shared so any one person only milks once every three weeks. 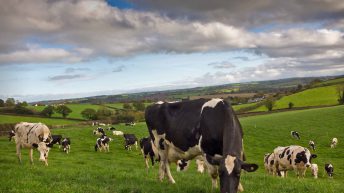 ‘Dairy farmers must be ‘brutal’ when cutting costs’