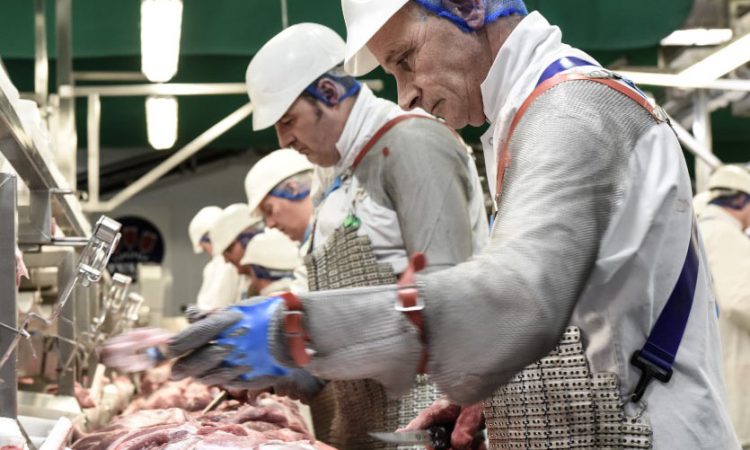 Problems in the group’s UK business are impacting the business’ earnings to such an extent that it will now take an extra two years to meet its target of raising the settlement price paid to cooperative members by 0.60 DKK per kg. (7p/kg)

As a result of the problems, more than 150 UK  staff members have been made redundant over the last two months.

Problems in the UK

“At the same time, a combination of turbulence on the world market, generally low world market prices for pork and a strong euro has significantly undermined our profit in the past year.

Contrary to expectations, we have therefore not managed to improve our overall performance but have instead gone into reverse.

“This is not good enough, and more than anything it is frustrating because in most other respects our strategy is succeeding.”

Due to declining pork and beef prices, Danish Crown’s revenue in the 2017-18 financial year has, in spite of acquisitions, declined from 62 billion DKK (£7.4 billion) to 61 billion DKK (£7.2 billion).

On the other hand, the gross profit is up 146 million DKK (£17.3 million) at 8 billion DKK (£950 million) following the acquisition of DK-Foods in Denmark, Gzella in Poland and the Dutch bacon specialist Zandbergen.

The group has posted a total profit for the year of 1,361 million DKK (£161 million) – a decrease of £17.9 million compared to the profit for 2016-17, once it was adjusted for special items such as non-recurring income from the divestment of Plumrose.

Valeur added: “After this summer’s drought, in the last three months of the financial year we have deliberately chosen to pay higher pig and cattle prices than warranted by the market.

Erik Bredholt, chairman of the Board of Danish Crown said: “We have done so to meet the ongoing liquidity needs of our owners.

“This costs on the bottom line, and therefore, we are ending the year with supplementary payments that are below what we have paid in recent years, but which are as high as is possible with a low but satisfactory level of consolidation.

“It is primarily Tulip that is dragging down the results. Despite the fact that the company actually returned a profit on ordinary operations for the first quarter of the fiscal year. A net operating loss of 260 million DKK (£30.8 million) has been posted for the year against a loss of 231 million DKK (£27.4 million) last year.

“A detailed review and analysis of Tulip has revealed that we have been unable to fully optimise our UK supply chain while operating costs are far too high.

We have therefore launched a comprehensive cost-cutting plan, and in the past two months, we had to say goodbye to more than 150 salaried employees in the UK business.

“Altogether, we expect to reduce costs by more than 200 million DKK from the 2018/19 financial year.”