Home » Beef » Declassified files: ‘Fish was on the plate, but beef (and BSE) were on the menu’

Declassified files: ‘Fish was on the plate, but beef (and BSE) were on the menu’ 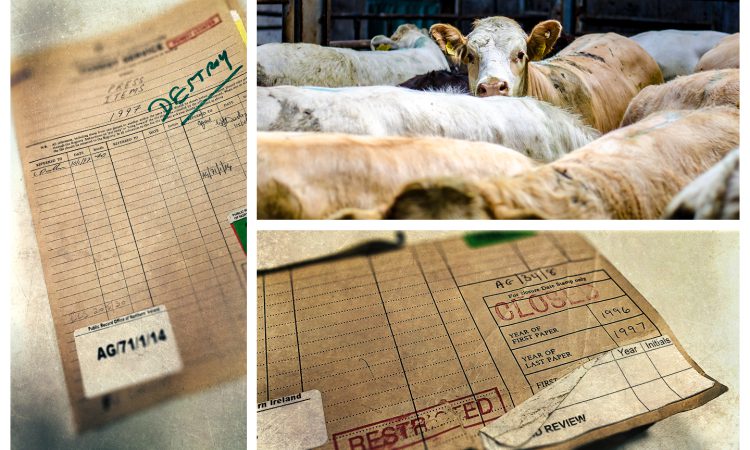 A meeting between British and Irish ministers at Maryfield, the base of the Anglo-Irish Secretariat, descended into jibes over how the BSE crisis was handled north and south of the border.

Northern officials accused the Republic of taking a “protectionist response” to the issue, according to newly declassified government files.

The documents – which include prime ministerial briefing papers, internal memos and draft reports from within the Northern Ireland Civil Service in the early 1990s – have been made public for the first time under the 20 Year Rule.

One four-page note headed with the word “confidential” discussed at length a dinner at Maryfield on May 15, 1996, during which discussion of the BSE crisis turned sour.

Baroness Denton, the then Northern Ireland Agriculture Minister; Gerry Loughran, former permanent secretary at the Department of Economic Development and head of the Northern Ireland Civil Service; David Donoghue, the Irish joint secretary; and other members of the secretariat were among those in attendance.

Drafted by J.R. Fisher, the British Anglo-Irish Secretariat, and dated May 21, 1996, it read: “Fish was on the plate, but beef (and BSE) were on the menu.

“There was distinct sympathy on the Irish side for our problems in the North but also a determined defence of their protectionist response, which the Irish felt should be understood and accepted by reason of the particular importance of the beef industry to the South.

Economic hardship apart, the Irish side acknowledged that presentationally their response was seen to have been ‘partitionist’ and unhelpful to North/South trade.

“It had also added to views expressed by David Trimble in his recent speech to the Institute of Directors in Dublin in which he had been critical of the Belfast/Dublin economic corridor project and said that Ireland was no more an important market for NI than the North of England (or Scotland).

“Baroness Denton recorded her disappointment over the remarks and their tone, not least the criticism made of the joint approach to tourism was misjudged.”

‘The menace of Northern cattle’

A second “confidential” memo penned by British joint secretary Peter Bell commented on the same dinner: “What was not, however, in Mr. Fisher’s note was ground covered over lunch about BSE.

“Mr. Loughran gave Mr. Donoghue a deservedly hard time over the attitude taken by the Republic to protect, in the narrowest 26 county, partitionist spirit, their ‘national herd’ from contamination from that on our side of the border.

The much-publicised deployment of the Irish security forces against the menace of Northern cattle (by implication Catholic as well as Protestant – if that is quite the happiest description) and the rhetoric of the Irish Minister for Agriculture had also been dismal – and from more than one point of view.

“It had also exposed those leading Protestant members of the Northern Ireland business community who had argued consistently and, to a degree, courageously in favour of developing further North/South economic links.

“Although Mr. Loughran was far too diplomatic to say so, Dublin’s rhetoric and actions had constituted, from a nationalist point of view, something of an own goal.”

A ban on the export of UK beef within the EU was introduced in March 1996 – just two months before the meeting.

The impact of the ban was particularly ruinous for the industry in Northern Ireland as meat plants relied heavily on export sales. Meanwhile, the Republic of Ireland distanced itself from the issue.

A month before the meeting, Irish security forces ‘sealed’ border crossing points in April 1996 to prevent cattle from being smuggled into the Republic.

An Irish Times report published at the time described it as one of Ireland’s “biggest security operations in decades”.

Within two years, more than 1,600 smuggled animals were seized, with the majority destroyed.

Today, Northern Ireland has one of the best BSE statuses in the world and was declared officially BSE free in 2017. There has not been a case in the region since 2012.

South of the border, the most recent case was detected in Co. Louth in 2015.