As well as the overall award, Kennedy also took home the accolade for the International Entrepreneur of the Year at the awards ceremony, which was held in the Citywest Hotel, on the outskirts of Dublin.

Kennedy is head of the Belfast-based agri-food giant Devenish, which has experienced significant growth in recent years. 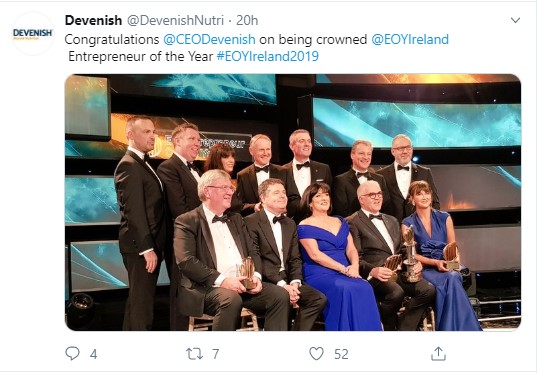 Meanwhile, Supermac's founder and CEO Pat McDonagh won the Entrepreneur of the Year in the "Industry" category.

Other notable winners on the night included: Triona Mullane of MAdme Technologies, winner of the Emerging category; and former Irish rugby coach Joe Schmidt, winner of a separate, special award on the night.

Entrepreneur of the Year

Organiser of the awards the EY EOY programme "passionately believes in promoting entrepreneurship across the island of Ireland and empowering entrepreneurs to grow their businesses in Ireland, Northern Ireland and around the world", according to the initiative.