A good commercial trade for Limousin bulls was led by the MacGregor's, Milton of Campsie, at Stirling on Monday, February 3, with a top price of 13,500gns for their Reserve Senior Champion, Dyke Olympian. 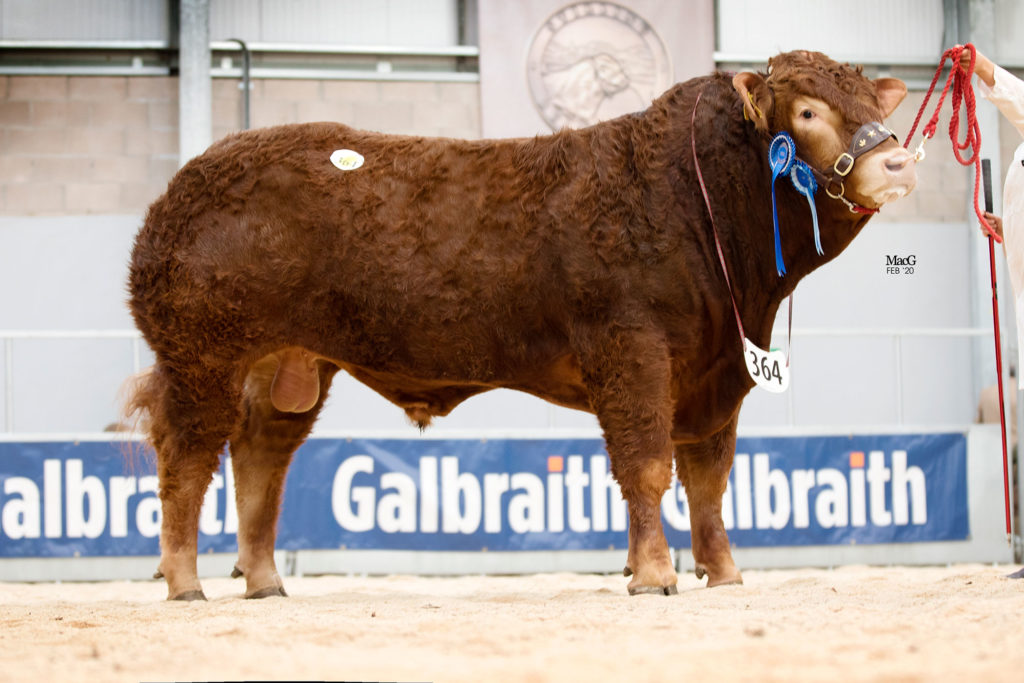 Capping a great day’s trading, Dyke sold all their run of seven bulls to average an impressive £7,455/head.

"It was overall a good show of bulls with strength in length, locomotion, loin and good tops," said Judge Robert McNee, Over Finlarg, Tealing, Dundee.

Very commercially minded and running an upland farm, the McNees hang all their own cattle - mostly through ABP Perth - so Robert was looking for easy-fleshing bulls with a bit of cover to get the maximum carcass return.

The day’s leading price, Dyke Olympian, is an April 2018-born son of the 12,000gns Goldies Lordoftherings, purchased when standing supreme champion at Stirling in February 2017.

The 13,500gns Dyke Olympian, described by the judge as “tall, long and very correct”, is out of the milky, 15-year-old cow, Dyke Amazon.

Dyke Amazon has bred show calves to £7,000 and is full sister to the 7,000gns Dyke Triumph. He carries a Beef Value of LM+53 placing him in the top 1% of the Limousin breed for growth and performance. 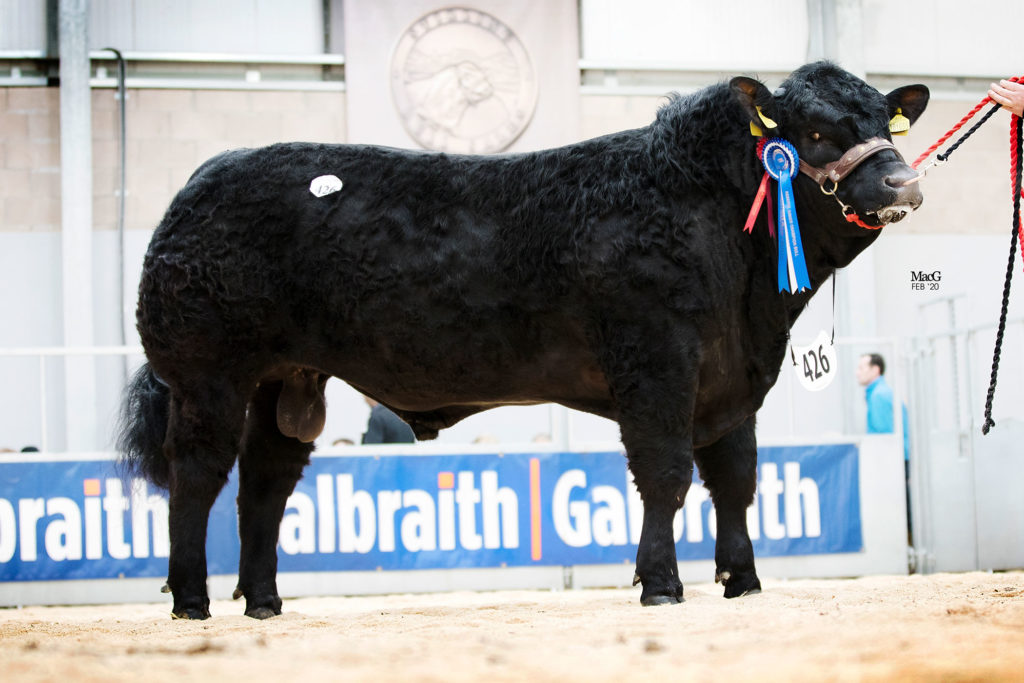 This black-coated bull was consigned by Messrs R.M. Adam & Son, Newhouse of Glamis, Glamis, Forfar with the herd also enjoying a solid trade that saw their six bulls gross £38,036.

Oriental was born in July 2018 and is by Westhall Jammy who sired the leading price at the corresponding fixture last year (Westhall Norris 11,500gns), and is out of Newhouse Lazykay.

Another with an exceptional Beef Value (LM+52), the judge described him as having tremendous length, top and depth of flesh.

The first of these was the Supreme Champion, Dyke Outlaw, born in April 2018 and weighing 1,090kg. 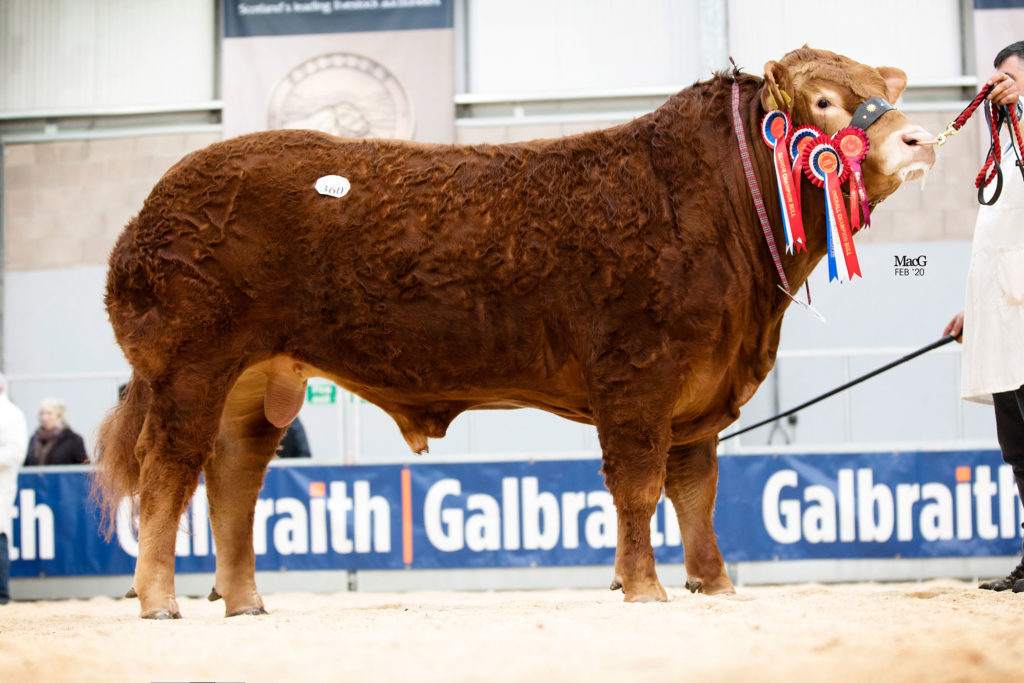 He is sired by Netherhall Gilbert, purchased at Carlisle and a good breeder in the herd with sons to date averaging £7,000. He is out of the Goldies Comet daughter, Dyke Jemma.

Another at 9,000gns was the fifth prizewinner Dyke Ovation (LM+56) when selling to Messrs Renwick, Corsebank, Sanquhar, Dumfries. 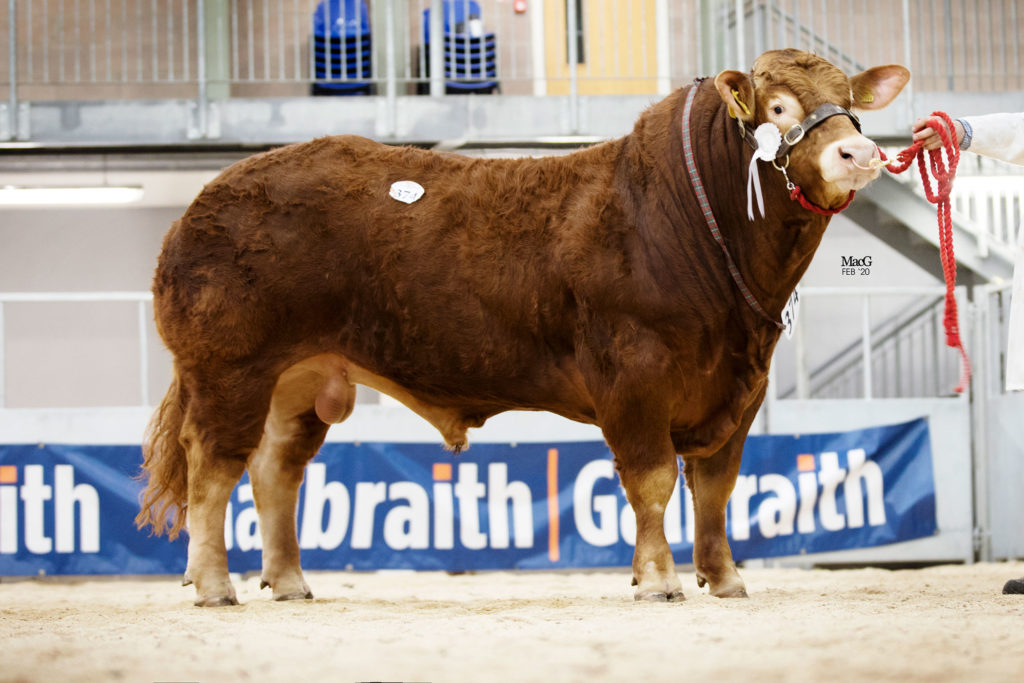 By the Goldies Fantastic son, Goldies Lordoftherings, he is out of the Ryedale Paragon daughter, Dyke Viva, still going strong at 15 years of age.

Also from Dyke when going under the hammer for 6,000gns to Messrs D. & E. Campbell, Benview, Kilmoluaig, Isle of Tiree was Dyke Ozzie, again by the Lordoftherings sire but this time out of the Haltcliffe President-sired dam, Dyke Dazzler. 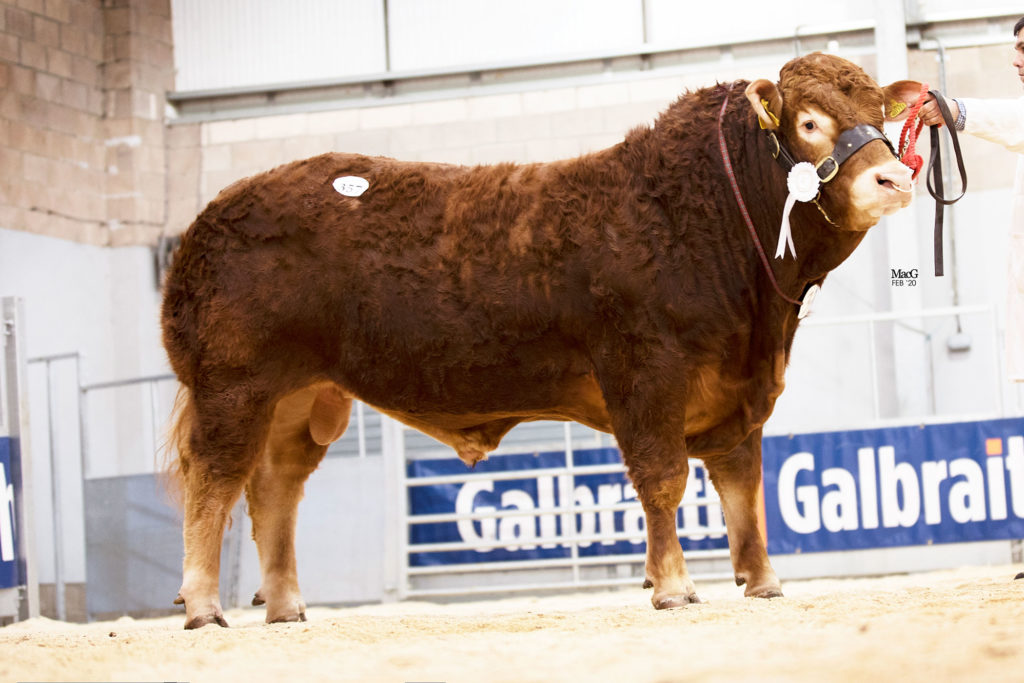 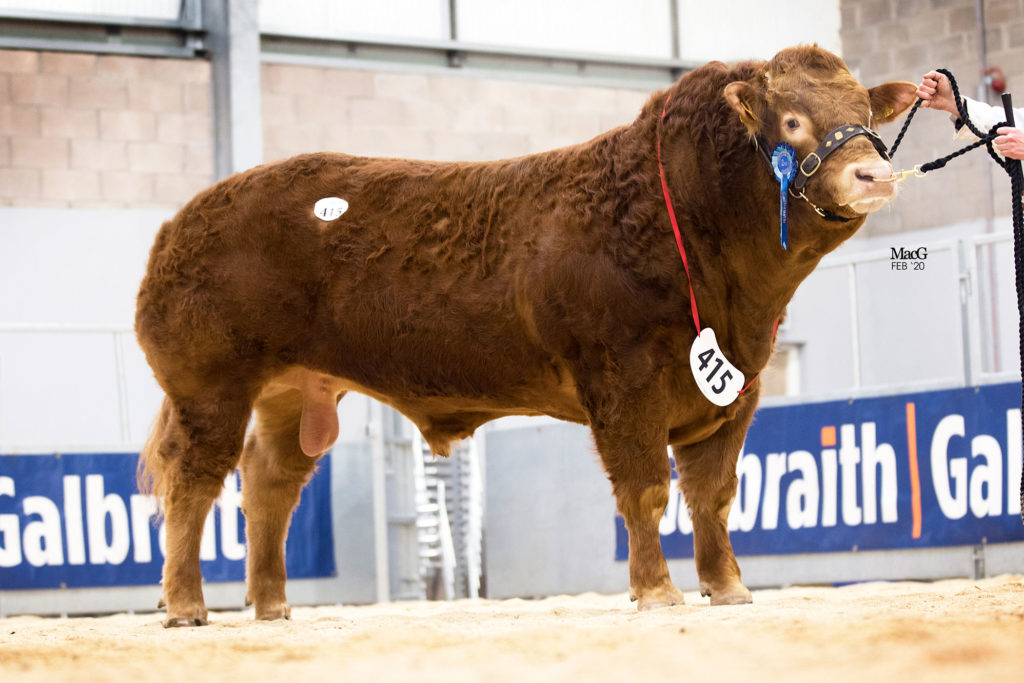 An A.I. son of the Irish-bred Elite Icecream, by Amperttaine Elgin, and out of the Haltcliffe Vermount-sired dam, Ringway Fallon, this June 2018-born bull was bought by Cobbleheugh Farms, Cobbleheugh, Dinnet, Aberdeenshire.

At the 8,500gns mark was the red rosette-winning Goldies Orlando from Bruce Goldie, Townfoot, Mouswald, Dumfries when knocked down to Huntlyhill Mains, Lanark. 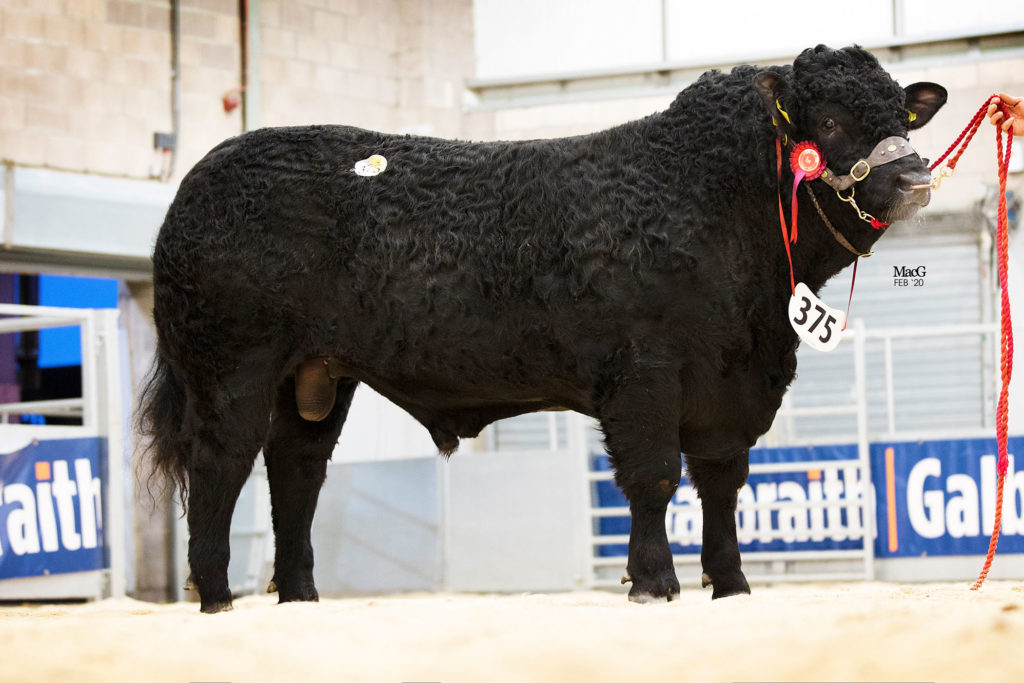 By the Ampertaine Gigolo son, Goldies Juggler, and out of the Goldies Terence-sired cow Goldies Dalmation, he sold with a Beef Value of LM+49.

Making 8,200gns for the Newhouse Herd was the fourth prizewinning homozygous black and polled Limousin bull, Newhouse Ontop, sired by the Newhouse Glamis son, Westhall Jammy, and out of Newhouse Lyn (by Greenhaugh Forester). 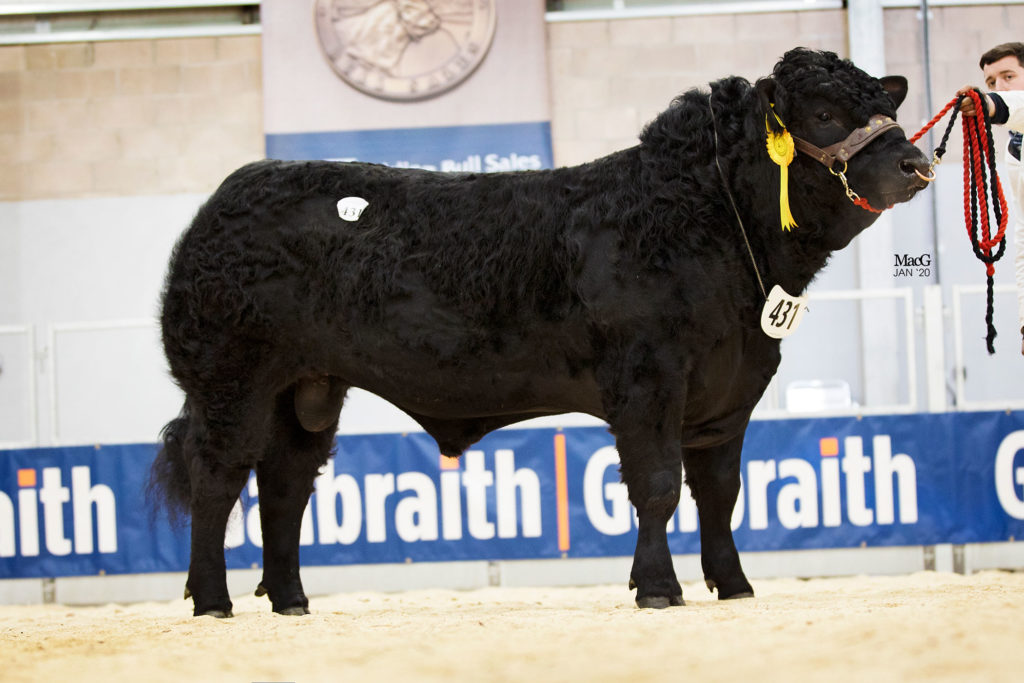 New owners are Dunecht Estates, Dunecht, Westhill, Aberdeenshire. At 6,800gns was Newhouse Omagh, by the same sire and out of the Objat-bred Newhouse Luckykay, who went under the hammer to G.T. & S. Coghill, Muce, Birsay, Orkney. 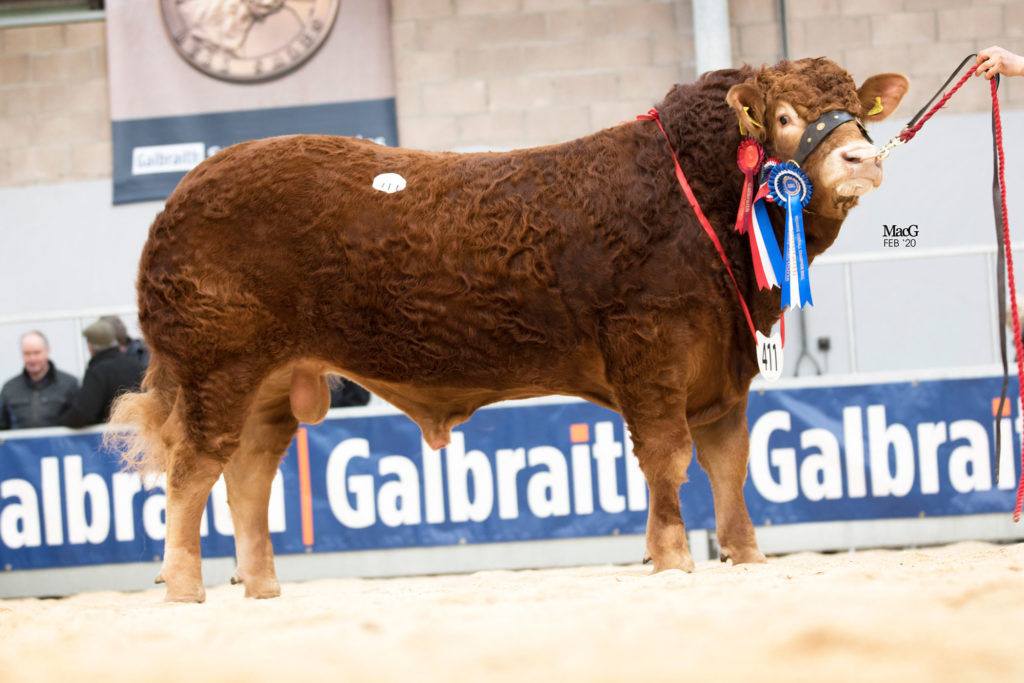 Admired for his length and depth by the judge and his ability to go on and develop further, Overland is by Burnbank Judge and out of the Sympa daughter, Spittalton Harriet. 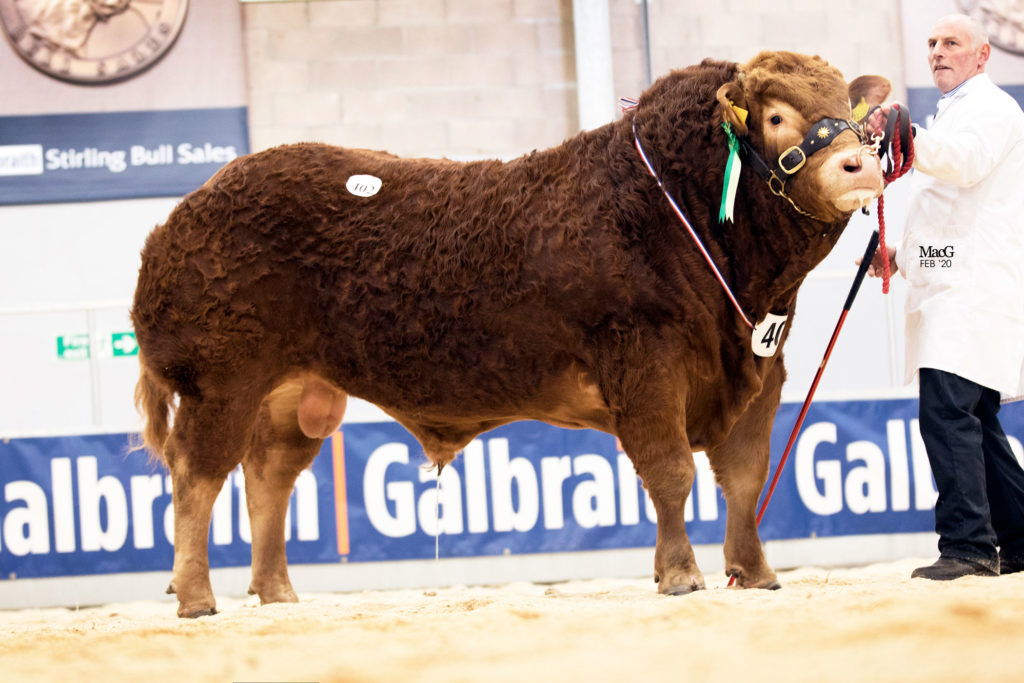 By the Jacot grandson, Lodge Hamlet, and out of the Nenuphar daughter, Harestone Ladybog, this May 2018-born bull went under the hammer to Wilson Peters, Monzie Farms, Gilmerton, Crieff. 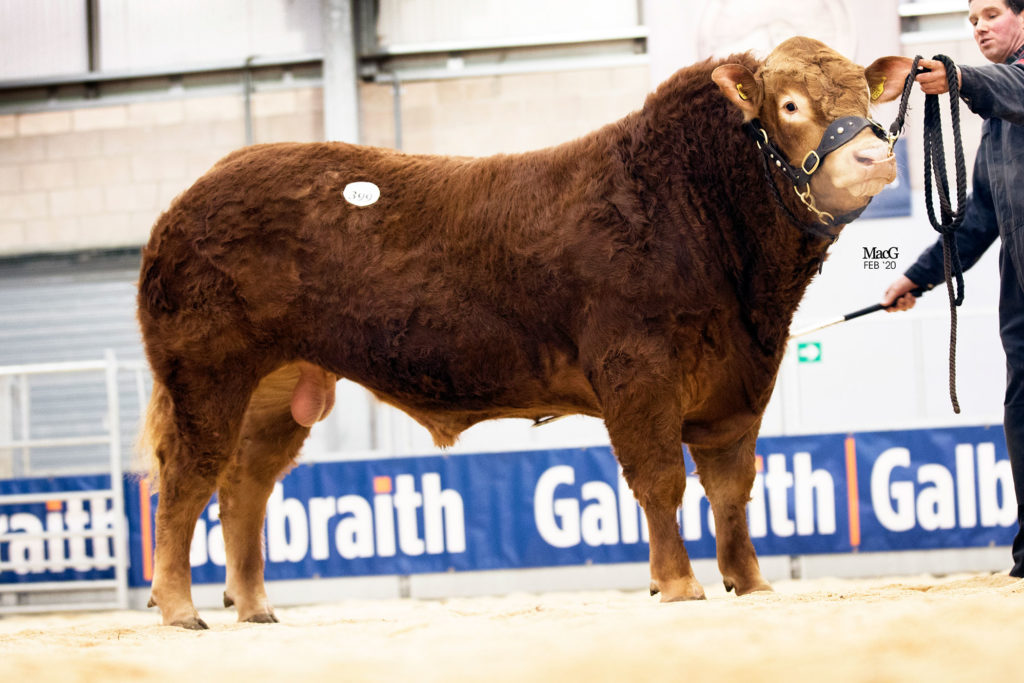