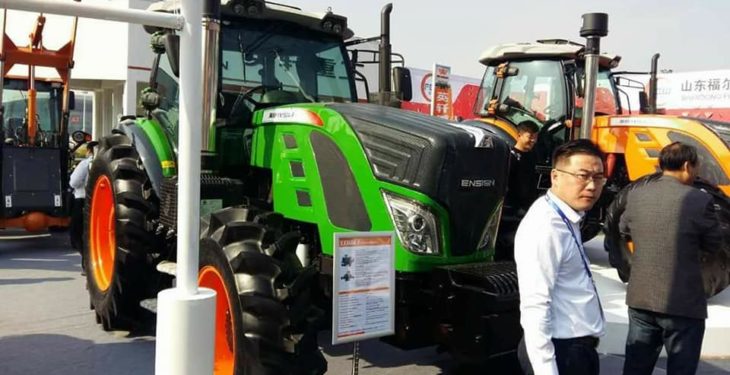 This tractor (main picture) was spotted recently at an overseas trade fair – the Chinese ‘International Agricultural Machinery Exhibition’. It was posted on Facebook by Dautel Landtechnik.

The tractor, along with other similar units on the same stand, is built in China. It bears more than a passing resemblance to some current Fendt models. The cab is admittedly very different, but the bonnet (hood) bears a striking similarity.

The best way to see this is to simply compare pictures of each tractor; the first picture (below) shows the Chinese-built tractor. The second picture shows a current 500 Vario Series tractor from the Bavarian manufacturer.

The Chinese tractor is actually manufactured by a company called Ensign. But who or what is Ensign?

Ensign Heavy Industries claims to have one of the most advanced technological R&D centres in the country.

All the loaders have passed the testing and certification requirements of the so-called China National Construction Machinery Quality Supervision Testing Center, as well as CE and EAC certification.

The company says that it has developed, or is in the process of developing, tractors from 25hp to 300hp.

Now, it plans to build a major brand-name in the world of agricultural tractors.