Home » Machinery » Farm and construction machinery to go ‘under the hammer’ in Co. Tyrone

Farm and construction machinery to go ‘under the hammer’ in Co. Tyrone

Tractors and farm machinery are expected to attract the punters at an upcoming sale organised by Euro Auctions, at its Dromore site in Co. Tyrone.

As is regularly the case for Euro Auctions, a large selection of plant machinery will also be on offer; the auction is set to take place on Friday, April 20, and Saturday, April 21.

Most of the tractors and farm machinery looks likely to go under the hammer on Friday, according to the company.

Amongst the farm equipment will be several modern New Holland and John Deere tractors, as well as a Claas Jaguar 900 self-propelled forager. There will also be a plethora of telescopic handlers and loading shovels – some of which might appeal to farmers or agricultural contractors.

These pictures (below) are just a sample of what’s up for grabs in Co. Tyrone.

Click on a thumbnail in the gallery (below) to open up a full-size image; once opened, you can scroll sideways to see the next picture.

Who or what is Euro Auctions?

Many years ago, the Keys brothers decided to hold an auction to sell used equipment they had in their yard. It was a one-day sale, in which they sold all the equipment on offer.

Such was the “success” of the event that they decided that there was a business opportunity to be taken advantage of; that was essentially the birth of Euro Auctions.

Founded in Dromore, Northern Ireland, the first official sale took place in 1998 – during which 371 lots went under the hammer in front of 1,500 bidders.

The year 2000 marked the company’s expansion into Britain, holding a sale in Wetherby; it featured Volvo dump trucks from the Far East. In 2002, a permanent site was purchased in Selby, Leeds. It played host to an inaugural auction consisting of 516 buyers, 83 sellers and 1,139 lots – as well as a £7 million (€8.3 million) hammer total.

2006 was another milestone in the company’s history, when it held its first auction outside the UK in Dormagen, Germany; it also achieved a €7 million hammer total.

The headquarters in Dromore underwent a face-lift with a new auction house, featuring a covered and seated auditorium, in 2009. It was closely followed in 2010 by a new auction site in Valencia, Spain.

In 2012 and 2013, Euro Auctions went global with new auction sites in Brisbane, Australia – which hosts four auctions annually – and Atlanta in the US – which generated $4.3m (€3.9m) in its first sale.

Meanwhile, 2015 and 2016 were all about expansion yet again, with the sites in Spain and the UK growing – as well as the establishment of a new site in Houston, Texas.

Today, the five Keys brothers are still involved in the business.

So how do you actually buy at Euro Auctions?

The first thing you will need to do is register in order to obtain a bidding number, which is essentially your ID.

To obtain a bidding number, you will need to complete a registration form and pay a deposit, which is either offset against the machine you purchase or refunded if you do not buy anything.

To bid on a machine you are interested in, you can simply make the ‘spotter’ aware by raising your hand when it is featured on the ramp and the bidding starts.

Beware; the auctioneer will try to obtain the highest price for the machine, so they will start at a high initial price. Sit back and wait to make a bid; don’t rush in.

Once you make a bid it is a binding contract and, in the event that someone else is also interested in the same machine, bidding will go up in increments until one person eventually wins out. 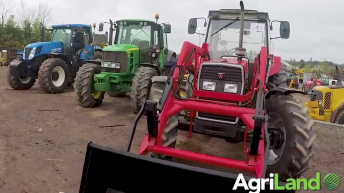