Kat and Kev from ArtFe

A sculptural cow made from salvaged agricultural scrap has saved the day for a social charity whose star raffle prize was stolen by thieves.

Community company Silver Stag of Scotland had planned on raffling off a 4ft tall cuddly highland cow worth £750 at this week's show. The money had been earmarked to fund Christmas dinner for the vulnerable and lonely in Glasgow.

But thieves scuppered the idea, breaking into a photographer's car and stealing the giant stuffed toy before the show began.

The cow has since been found abandoned at Coatbridge Railway Station, but unfortunately was too badly damaged to use by the time it was recovered.

The good news, however, is that the donations have been pouring in since scrap metal artists ArtFe stepped up. Already hundreds of pounds have been pledged by well-wishers both online and at the show.

The very special little cow to take its place is one of 175 Highland Cow sculptures made by ArtFe to be commissioned by the Royal Highland & Agricultural Society Of Scotland. 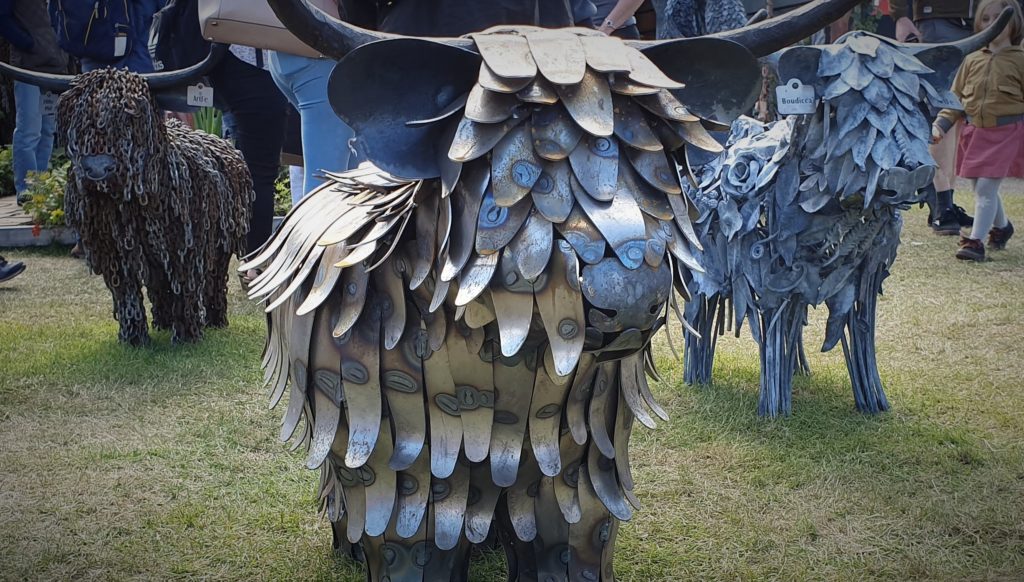 The firm has the contract for the gates, fencing and maintenance with Kev Paxton, ArtFe's founder, also specialising in artistic blacksmithing for more than 30 years.

Kev Paxton, founder of ArtFe, who is donating the sculpture said: "When we heard about the cuddly cow being stolen we wanted to do something right away. The society commissioned 175 cows to celebrate its anniversary three years ago. We decided to donate one to replace the cow which was stolen.

As a tiny company, we do quite a lot for good causes - we are not driven by money, we are driven by happiness.

"We want people to come and enjoy our pieces; they are all made to make you smile. They all have little metal hearts with our logo inside them."

Partner Cat added: "The cows are limited edition - once we have made 175 that's it; there will be no more.

The first one was gifted to the Queen because she is a patron of the society, so whoever wins this will have a part of a limited collection which the Queen owns one of too.

ArtFe's sculptures are all made from agricultural scrap - with some made using chains and others using plough metal.

Sara Brand from Silver Stag of Scotland said she was blown away by the couple's generosity.

"The cow was to be raffled off to pay for Christmas dinner for 100 people who would normally be isolated on Christmas Day," she said.

"To give an idea, the youngest one who attended last year was just four months old and the oldest was 97.

"I thought the photographer was joking at first when he said the cow had been stolen. But then I began to worry about what we would do to replace it because that was going to be our centrepiece. We had a lot of plans made around it and then it was taken away.

We are just delighted and we have really been taken aback by the generosity of the team here and everyone else. We have already exceeded what we expected to get for the soft Highland Cow.

Judith O'Leary from RHASS said: "We were delighted to facilitate a replacement cow with ArtFe once we heard about the theft. Kevin and Cat are a great team who give their time and their beautiful cows to great causes and we were only happy that one of our limited edition livestock sculptures was provided."

The RHS Highland Cow sculptures retail for £1,175. Tickets are available on the stand for £5 or by contacting ArtFe or Silver Stag of Scotland online. The draw will take place next week.