A 56-year-old farmer has been convicted and fined for a number of animal movement and animal welfare offences.

He was convicted on a number of charges involving animal movement and identity offences, as well as unnecessary suffering, according to the Department of Agriculture, Environment and Rural Affairs (DAERA).

Yorke failed to notify the department of cattle movements onto his holding or the birth of three animals. Added to this was one charge of using an ear tag to identify an animal, which had already been used to identify another one.

He was also reportedly charged with causing unnecessary suffering to two bovine animals.

This case arose following a cattle identification inspection and a follow-up investigation of Yorke’s activities by officers from the department’s Welfare and Enforcement Branch.

Leaving the cattle identification and movement irregularities aside, officers discovered two cows in a field in very poor condition during the investigation.

Both cows were severely emaciated and unable to rise, while birds were also pecking at one of the animals. In order to prevent further suffering, the two cows were euthanised by a veterinary surgeon, the department confirmed.

It should be clarified that, at no stage, was Mr. Yorke charged with swapping (cattle) ear tags. The charge (relating to ear tags) involved the use of an ear tag to identify an animal, which had already been used to identify another animal.

Last week, it was announced that farmers in the flood-hit valleys of Glenelly and Owenkillew in Northern Ireland will receive departmental assistance to dispose of dead animals lost during the recent flooding.

The department announced the plan as part of the measures it has put in place to support farmers affected by the serious flooding in the northwest.

The collection and disposal of the animals will be organised by the department, provided farmers can arrange for the animals in question to be taken to a location which is accessible to large vehicles.

DAERA has decided to put this measure in place in order to prevent the development of animal and public health issues. Carcass collections will commence from today onwards. 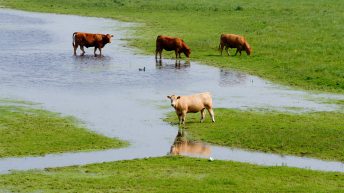