Home » Environment » Farmer in the North fined for polluting waterway

Farmer in the North fined for polluting waterway

During the inspection the WQI’s observed a heavy grey/brown fungal growth covering 100% of the bed of the waterway.

The source of the polluting discharge was traced to the farm owned by Duncan, where the WQIs discovered large cracks in the yard concrete.

The WQIs also noted cracks at the back wall of a midden lagoon and observed a flow of effluent entering a block built chamber.

Advertisement
Dye tests carried out on January 13, 2015 demonstrated continuity between the effluent discharging from the farm and the waterway. The waterway was impacted for a distance of some 1.1km.

A sample taken at the time of the incident confirmed that the discharge contained poisonous, noxious or polluting matter which was potentially harmful to fish life in the receiving waterway.

Meanwhile, another farmer in Co. Derry was recently fined for polluting a waterway with silage effluent.

William Steele from Liswatty Road, Coleraine was was convicted for making a polluting discharge to a waterway and fined £600 (€711) plus a £15 (€18) offenders levy.

On February, 10, 2016, a Water Quality Inspector (WQI) acting on behalf of the Northern Ireland Environment Agency (NIEA), inspected a waterway at Ballyvelton Road, Coleraine and observed fungal growth in the waterway.

The source of the polluting discharge was traced to the farm owned by the farmer where inspectors discovered silage effluent had entered a storm inspection chamber and from there it flowed to the waterway.

A dye test carried out in February demonstrated continuity between the storm chamber and the waterway, which was impacted for a distance of 1.6km. 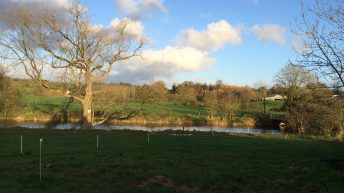