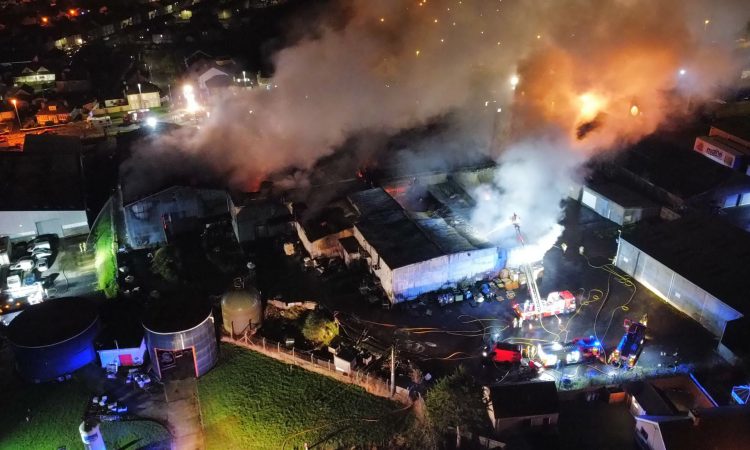 Over 100 firefighters from across Northern Ireland have been tasked to an on-going fire at a former poultry factory in Ballymoney, Co. Antrim.

The incident at the former Fleming Factory on Ballymena road is no longer being treated as a ‘major incident’, however firefighting efforts are expected to continue into this evening (Tuesday, November 23).

Throughout the night, more than 100 firefighters – including nine officers – 15 fire appliances and 10 specialist appliances fought to bring the fire under control.

Coming into this afternoon, at 11:47a.m, more than 30 firefighters – including four officers – four fire appliances, two aerial appliances and one high volume pump were still at the scene, alongside a Command Support Unit.

Arrangements have been made to maintain emergency response cover across Northern Ireland. The public is being asked to avoid the area and local residents are advised to remain in their homes.

The cause of the fire is under investigation.

Northern Ireland Fire and Rescue Service (NIFRS) took to social media yesterday (Monday, November 22) at 6:28p.m to announce the beginning of what would become the overnight mission.

At the time, the NIFRS asked that all residents in the area stay indoors and close all windows.

Four hours later, at 9:40p.m, the NIFRS declared the fire a ‘major incident’.

Arrangement were made to maintain emergency response cover across Northern Ireland and local residents were again asked to remain in their homes, with doors and windows closed.

The investigation into the cause of the fire got underway.

After eight hours at the scene on Ballymena road, operations to extinguish the fire had not yet ceased.

“Thanks to our Blue Light partners and other agencies who have assisted NIFRS to implement operations throughout the evening,” it was added.