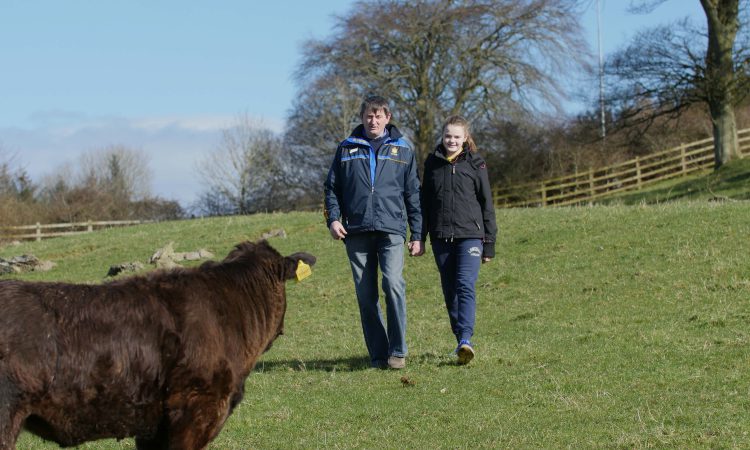 “I’m the person that flies with the animals to Africa.”

This was the straight-forward way John Fitzgerald described his experience as an in-flight groom with Irish international charity Bóthar.

The sheep and beef farmer from Newmarket-on-Fergus, Co. Clare, explained that his family have always been firm supporters of Bóthar, starting with his parents: “We used to always buy presents for my parents at Christmas of chickens or a calf. We’d buy them a present out of Bóthar.”

Taking a more active role with the charity in 2005, when he was asked to store loading equipment for Bóthar, John explained that, by 2012, he started flying with the organisation to mind the livestock onboard and keep them calm.

This involves a multitude of animals, including: goats; chickens; pigs; bulls; and of course in-calf heifers – as well as AI straws and other such items.

Three years ago, John and Willie O’Gorman, also from Bóthar, were involved in flying three bulls – two Friesians and a Simmental – to Rwanda. The animals had been bought by the Rwandan government from Dovea AI in Co. Tipperary, with the grooms helping out as a favour.

“We’ve never lost an animal in flight and never had anything untoward happen in-flight. The people that give the animals are the real heroes though,” he said.

“In fairness, can you imagine going around asking someone to give an animal that’s worth €900 up to €1,400 and give it for free? Only for them and the people that send in donations to fly these animals to Africa, it wouldn’t happen. They’re the heroes; I’m only accommodating them.”

Turning to where he has transported animals to, John listed off nations across the world, including: Romania; Albania; Tanzania; and a number of other African countries.

It’s Bóthar’s second biggest fundraiser of the year and, in its absence, he’s joined by a large team promoting and selling tickets for its stand-in – a still impressive Quad Draw.

He’ll even be on hand next Thursday when the draw comes live from John ‘Bull’ Hayes farm in Limerick on the same day it is held every year.

“Rwanda would be the big one for me; there’s a couple of great projects in Rwanda,” John said, highlighting his experience of Kigali, the capital of Rwanda, and other regions in the country.

After the genocide in 1994, it left an awful lot of widows in the country with absolutely nothing. And they’re still trying to help out those people. You can see it there when you’re with people in Rwanda; you see people that are missing limbs and people with scars, you see people walking with crutches.

“I went there first in 2013 and, with the differences I have seen there in seven years, I can’t believe how the country has come on.

“It’s still a very poor country – a man works there for €1.50 a day. So you can imagine how poor they are. There are plenty of kids there who are under 16 or 17; they’d be more or less destitute.

“Someone would take them in, and just for their food, they’d work for the day. It’s a very poor place but it has come on a lot.

You wouldn’t believe the ceremonies that are around there for the handing over of the cows, the dancing and the speech making – it’s just fantastic to watch, they’re just so appreciative.

“I saw a woman down there, an older lady; a widow as a result of the genocide. She’d taken on a few kids that had been orphaned and reared them along with one of her own.

“This woman had nothing – a few chickens and a cow. But, because she had a cow, it gave her status and a certain amount of wealth relatively.

“Myself and another Irish guy involved with Bóthar, Anthony O’Gorman, we were standing there gobsmacked by this. She said she was too old for bending down to pick up the cow pat.

“Another great thing that happens there is that, when a cow is donated from Ireland, the first heifer calf that she has is passed on to another family.

“It continues on – even when the cow has left here and she could be gone a long time, she’s still benefiting other families along with the family that got her originally, which is a great thing, passing on the gift.”

When asked about the need to help, John said that the Irish as a people in general “love to help”, adding: “There’s a great sense of satisfaction in helping someone else without really looking for recognition.

It is life-changing – it’s the difference between being in dire poverty and being a person of substance.

“When you’ve a small bit of money you can afford to do stuff – build reservoirs for rain water – you can now afford to put in a tank that will store rain water. That stops you having to walk two or three miles to a well.

“They put in gasifiers – they collect the manure from the animal, they put it into a little agitator, leave it to settle and take the methane out of that then.

“They collect the gas and cook with it.

An awful lot of people in Rwanda, because they cook with charcoal, have respiratory problems – and this eliminates that.

“There are a huge amount of benefits. With fertiliser alone, they can fertilise their crops.”

The farmer explained that cows are given to people deemed to be most in need. He added: “The Irish dairy cow will give three, four or even five times more milk than the local cow – everyone wants an Irish cow!”

Bóthar is currently running a Covid-19 campaign – a quad draw – to raise funds for its programmes in Rwanda, Zimbabwe, Malawi and Nepal. The draw will also see three children’s motorised cars for younger members of the family up for grabs.

For full details on the draw and to buy your ticket, go to: www.bothar.ie.