Giant new mower-conditioner can cut up to 50ac/hour 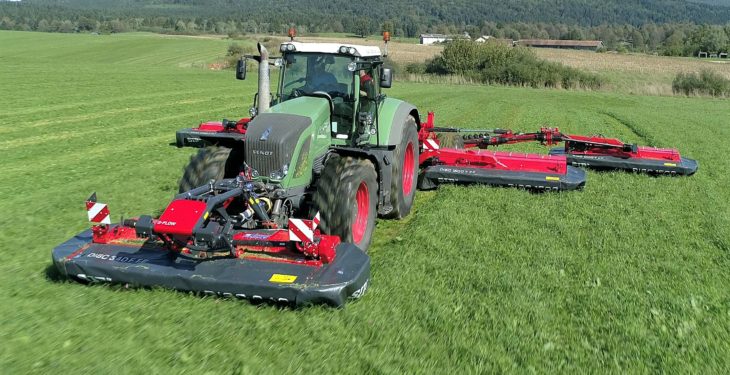 SIP has joined the ranks of companies producing giant mowers. In fact, it claims that its new Silvercut Disc 1500 T FC is the largest of its kind.

With a working width of almost 15m, this huge tractor-powered rig will take pride of place on the Slovenian company’s stand at next week’s Agritechnica show in Germany.

To date, the big mower has been spotted working while coupled to a Fendt 936 Vario – presumably an indication of the muscle needed to drive the machine. The factory quotes an official power requirement of 350hp.

At the front, there’s a Silvercut Disc 340 F S-Flow front mower. At the rear, there are four mower units (collectively known as the Silvercut Disc 1500 T). These each have a working width of 3.25m. The machine (excluding the front mower) weighs 9.1t.

This all results in a total, effective working width of 14.55m. Typical work-rates, according to SIP, are up to 20ha/hour (50ac/hour).

All mowing units behind the tractor are mounted on a purpose-designed, trailed frame. All production-spec machines will likely be equipped with active (forced) steering, brakes and suspension.

The folding mechanism is protected by a patent, according to the manufacturer. How does it work? For starters, the four mower units are raised off the ground; the two units closest to the tractor then pivot up vertically.

The two furthest back mowers are then lowered slightly and swung inwards. This, says SIP, results in a transport configuration (for the rear assembly) that is only 3m wide and less than 4m high. It spans up to 7.5m in length – so it’s still a sizable beast on the road.

The first prototype has been fitted with a conditioner system. It is expected that production-spec machines will be available with or without a conditioner.

In 2018, SIP is expected to build and extensively evaluate less than half a dozen of these giant machines. Expect to see them become available commercially (for sale) the following year.

A starting (list) price of €130,000 (excluding VAT), depending on specification, has been touted by some European outlets.

SIP machinery is distributed here in Ireland by Farmec – which is based in Co. Meath. 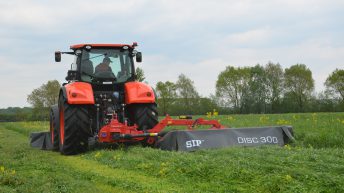 Protection system from newcomer SIP…results in a safer ‘snip’