A Co. Antrim club has clinched this year’s Young Farmers’ Clubs of Ulster (YFCU) Club of the Year title at the organisation’s AGM.

Members of Glarryford YFC were given the title in front of hundreds of young farmers across the province at the Armagh City Hotel.

The event, which is sponsored by Massey Ferguson, welcomed members from sister organisations the National Federation of Young Farmers and Welsh Young Farmers to the AGM and Conference.

The association’s most eagerly-awaited competition also took place just before the formalities of the AGM.

Five clubs made it through to the final, including:

Each club had to deliver a presentation to a panel of judges about why their club deserved the title. After a nervous wait, Glarryford YFC was declared the winner.

This hotly-contended competition was established in 2012 in memory of former YFCU general secretary, Arthur McAllister.

Additional awards were also presented; members of Glarryford YFC were announced as the winners of the best presentation as part of the competition and Newtownhamilton YFC picked up a prize for the best video at stage 6 of the competition.

An informative morning programme was arranged for members and delegates from sister organisations. This gave members the opportunity to take part in workshops; the first workshop of the day was provided by Nexus and covered online dating. 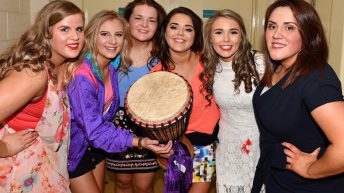 YFCU’s 2 new VPs set to be elected this weekend