A strong year of pedigree Limousin sales closed with a robust trade at the Red Ladies Derby and Weaned Calf Sale held at Borderway Mart, Carlisle on Friday (December 14).

Leading the way, for the third year in a row, was the Grahams herd of Robert and Jean Graham, Airthrey Kerse Dairy Farm, Bridge of Allan, Stirling.

The herd sold the September 2017 born Grahams Nicki (pictured top) for a sale-topping price of 20,000gns.

The leading price followed on from earlier in the day when the stylish heifer lifted the Red Ladies pre-sale show Supreme Championship judged by Sarah Priestley of the Brontemoor Herd, Brampton, Cumbria.

Grahams Nicki is the first granddaughter to be offered for sale from the herd's prolific cow Grahams Coffee.

By Ampertaine Gigolo she is out of Grahams Lulu, who is the only daughter from the Grahams Coffee Claragh Franco mating to be retained by the Grahams herd.

Nicki came to the Red Ladies Derby having won the Senior Female and Reserve Overall Senior Champion at the 2018 Stars of the Future event at Stirling back in November.

This much-admired heifer was won by Stuart Perkins, Haywood Farm, Radstock, Avon for his growing Hartmoor herd, which having been established earlier this year now runs to 10.

Next in the price stakes, at 17,000gns, was the pre-sale show Reserve Champion in the shape of Proctors Nellgwyn from Proctors Farms Ltd, Slaidburn, Clitheroe. 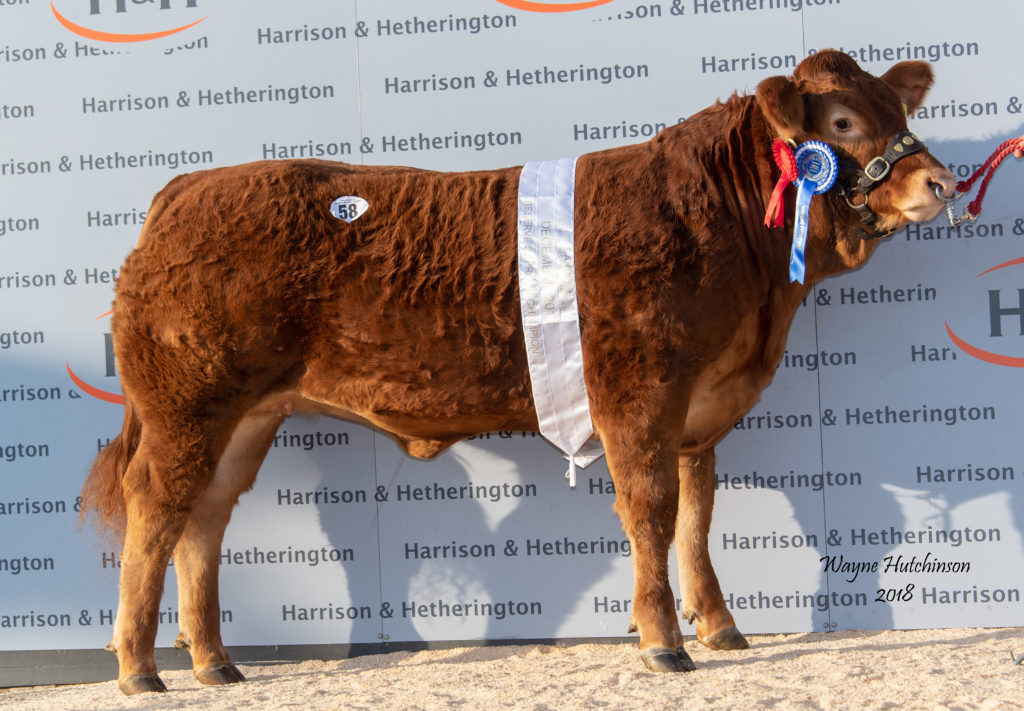 This September 2017 born heifer, by Ampertaine Foreman out of the Haltcliffe DJ daughter Proctors Gwen, was another purchase for Stuart and will be heading down to Avon with Grahams Nicki.

Speaking after the sale, Stuart said: “I am delighted to have secured these two fantastic animals to bring new bloodlines into my growing herd.

Although, I couldn’t get to the sale myself, I had done my homework and picked these two out beforehand, they were exactly what I was looking for.

"The fact that they were 1-2 in the Championship judging is a super bonus and gives me confidence that I am looking in the right places for my purchases.” 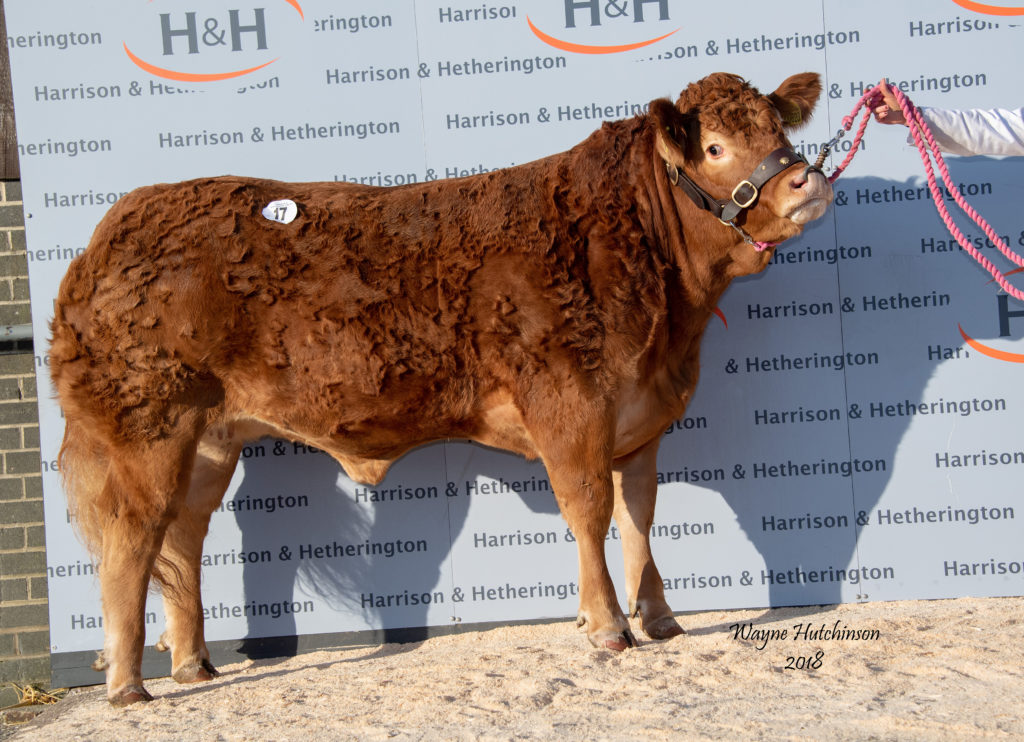 This March 2017 born heifer is a Ballinloan Jaegerbomb daughter out of Huntershall Hattie, a powerful Homebyres Vanhee daughter and one of the herds milkiest cows.

This heifer comes from one of the strongest dam lines in the breed - her dam being the noted Milbrook Gingerspice, the only animal to win Breed Champion and Interbreed Champion at Balmoral Show on three consecutive years.

At 12,000gns, came the class winner Wilodge Naturelle from the Wilodge herd at Shifnal, Shropshire. Born November 2017 she is the first female to be offered for sale by Grahams Lorenzo.

Her dam, Wilodge Diamante, combines two of the herd's renowned maternal lines in Vantastic and Cerberus, highly productive in the Wilodge and several other herds. Making the winning bid was M & JC Gould, Shrewsbury, Shropshire for their Woodmarsh Limousin herd. 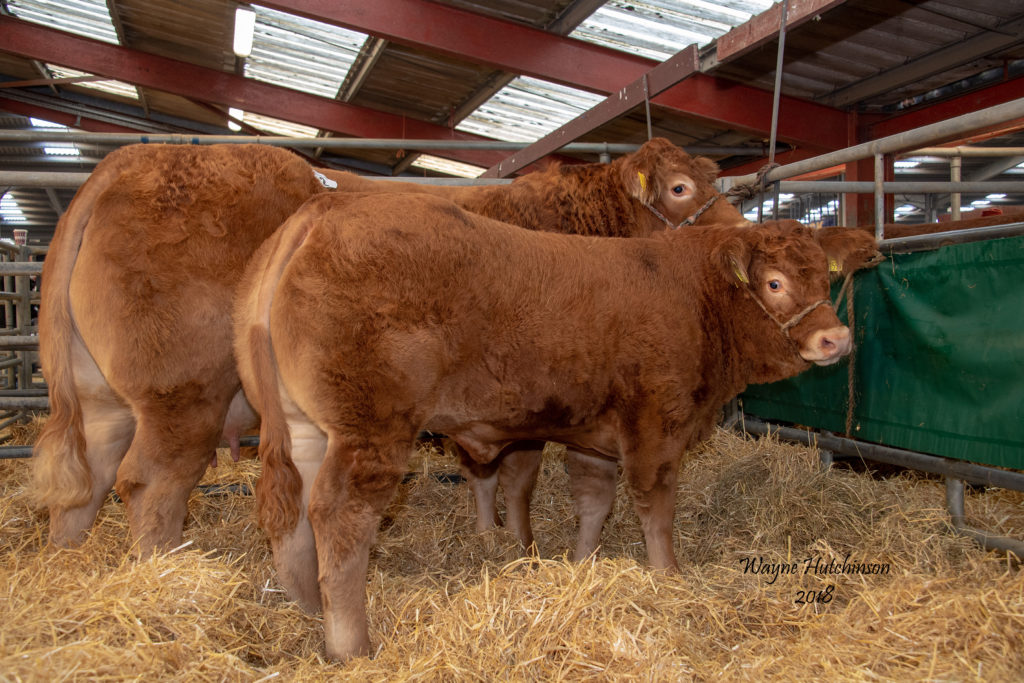 The Wilodge herd had sold a cow and calf unit early in the day to 10,500gns. Sold separately, first up, and making 4,500gns, was Wilodge Heron, a 2012 born cow by the Sympa son Ampertaine Bravo out of Wilodge Erona, a Rocky daughter.

In-calf to Grahams Lorenzo she was bought by Messrs Walker and Son from Driffield, Yorkshire for their Wilfholme Limousin herd.

The same buyer then made the winning bid of 6,000gns for her eight-month-old Lowerffrydd Empire sired heifer calf Wilodge Orona.

At 10,000gns came another female from the Grahams team, this time in the shape of Grahams Nightingale. Out of Grahams Jemimah, this 12-month-old heifer is one of the first Goldies Jackpot daughters to be offered for sale. Securing this stylish heifer was Owen Comer for his Braydonside Limousin herd at Braydon, Wiltshire.

In the bull section of the Weaned Calf Sale, Aultside Overdrive from Garry Patterson, Keith made a new weaned bull calf record price of 16,000gns when the gavel went down to Ian Handley for his Gunnerfleet pedigree herd at Ingleton, Lancashire. 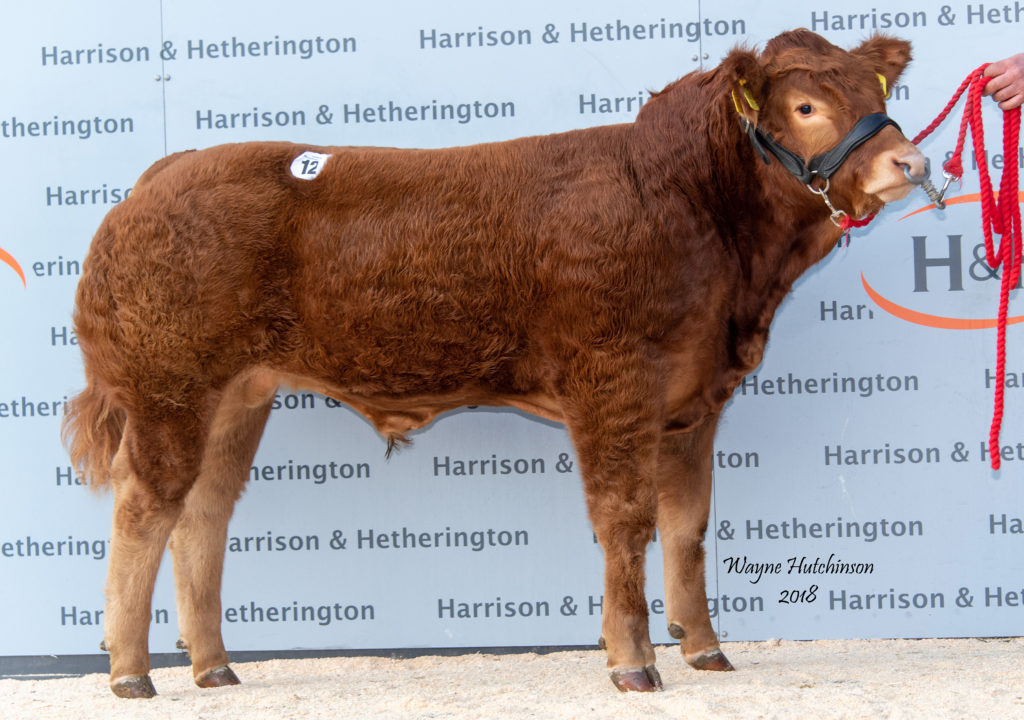 The eight-month-old calf, who was tapped out as the best bull calf in the pre-sale show earlier in the day, is an embryo calf by the renowned Ronick Hawk.

He is out of Spittalton Flush, who has bred bulls to 65,000gns, Aultside Meanmachine, Supreme Champion at Carlisle in February, and heifers to 18,000gns for Aultside Mystique, Red Ladies in 2017.

From the Weaned Heifer Calf Sale, the hammer went down at 11,000gns for Haltcliffe Ode from the Haltcliffe herd of Craig Ridley, Wigton, Cumbria. 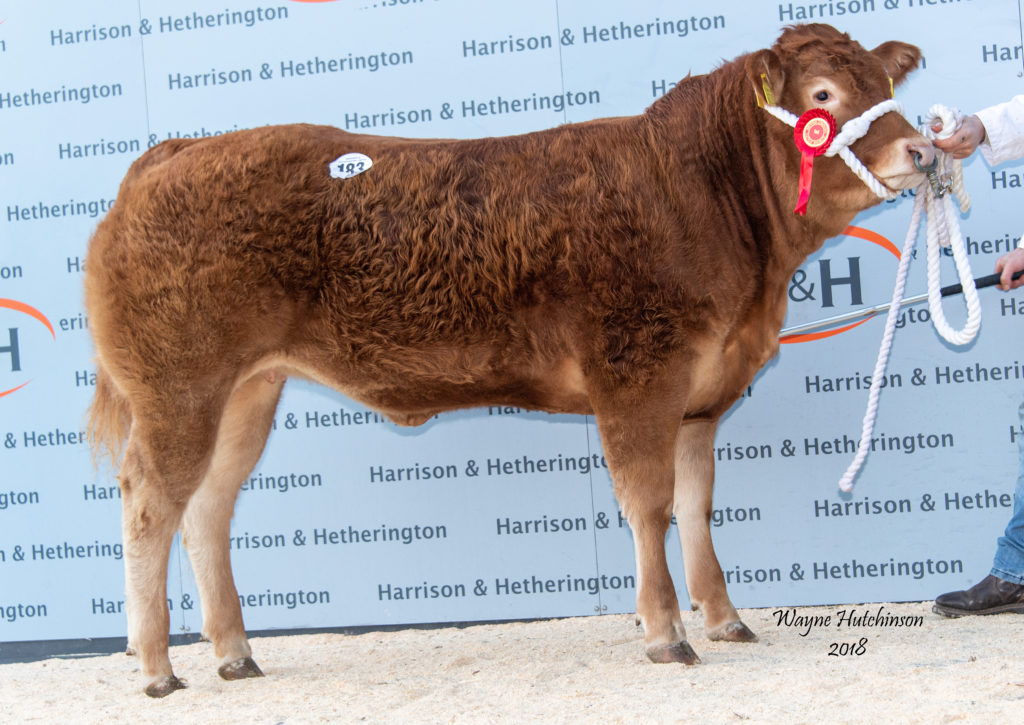 This January 2018 born natural calf is by Dinmore Jacot out of Haltcliffe Jingle, who’s breeding goes back to the renowned Sympa. Ode, who had been tapped out as the best heifer calf in the pre-sale show was bought by Gary Morrissey, County Carlow, Ireland.

This embryo calf is by the prolific Ampertaine Gigolo and is out of the stylish show winner Foxhillfarm Gracie.