Grain price: Little movement in price or some harvest reports

Winter planting of cereal crops remains at a standstill here in the UK and Ireland as wet weather dominated the week and sent land into further lockdown.

Tillage farmers are now facing into a busy spring and reduced yields next season. At times like these, it is sometimes useful to look at what’s happening around the world. Weather woes are a lot more extreme in other parts.

In western Australia, cereal farmers were put into lockdown because of extremely hot weather. Farmers are not allowed to move or operate machinery when the “Harvest & Vehicle Movement Ban and Total Fire Ban” is announced.

This is becoming common in parts of western Australia this harvest in order to stop a fire from starting and comes as farmers are already expecting poor yields as a result of drought.

Snow is having a serious effect on Canada’s harvest of corn and canola. Reuters reported that, as of November 5, 2.7 million acres or 13% of the country’s canola crop was yet to be harvested.

This will no doubt result in losses of the crop, but may also have a knock-on effect on spring plantings which may be delayed as farmers harvest remaining canola crops.

As of November 17, 76% of US corn had been harvested – 16% behind the five-year average of 92% for the same time of the year. This is according to the United States Department of Agriculture’s Crop Progress Report.

As the harvest is behind schedule the USDA intends to continue crop progress reports after November 25, which was the last scheduled date for the season.

There was little excitement in grain markets this week. Chicago Board of Trade (CBOT) wheat climbed slightly on the back of reduced crop condition scores, while MATIF wheat for December moved up by approximately €3/t in the week. LIFFE wheat dropped slightly. 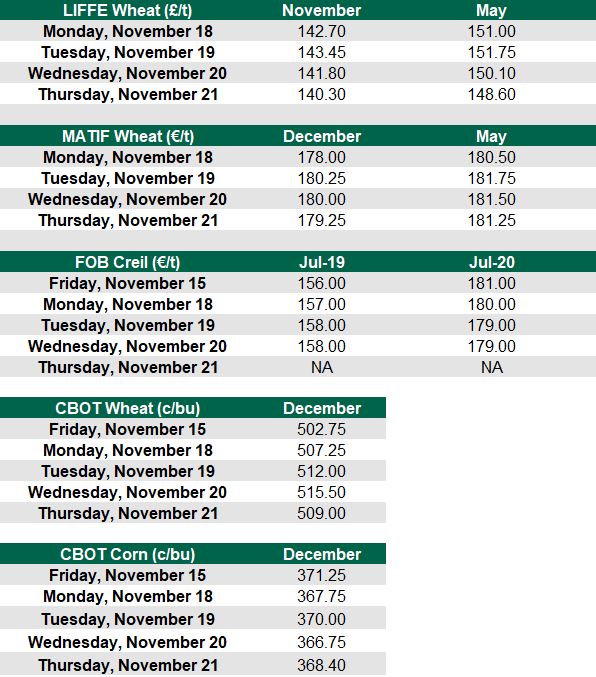