Grain price: Struggling to plant on the continent

Tillage farmers here in Ireland aren't the only ones struggling to plant this autumn. The problem is reflected across the continent and in the UK.

While planting will no doubt continue in these countries it is important to keep an eye on the figures and get an idea of next season's stocks.

Figures from David Eudall of the UK's Agriculture and Horticulture Development Board (AHDB) show that planting delays are significant in Europe.

The maize harvest is also just 46% complete, almost half that of this time last year when it was 90% complete.

Back to this year's crop and Dan Basse - Ag Resource Company, Chicago - expects wheat to peak in November or December.

"World wheat supplies are record large. World supplies excluding, or not excluding China, have been moving up, so the world has this abundance of wheat," he told the R&H Hall conference this week.

There's no shortage of wheat within the world.

"It's just a shortage of sellers today from the farming community from the US, Russia and some other places around the world."

Basse continued on to say that world wheat yields are at record highs and doesn't expect anything dramatic to happen in the milling or feed wheat market. However, he does see it peaking in a short time.

We're forecasting that the Black Sea world wheat market will top somewhere between $211/t and $216/t some time in November or December.

"Our work suggests that lower prices will then occur after the holidays, so if you've got any wheat we'd kind of target this time frame in the next four to six weeks to be a seller of that market based on where we see prices going forward."

There hasn't been any dramatic change to grain markets this week. LIFFE wheat is up slightly on last week, while MATIF wheat is moving around the same. US wheat and corn is down, while malting barley is unchanged for July 2020. 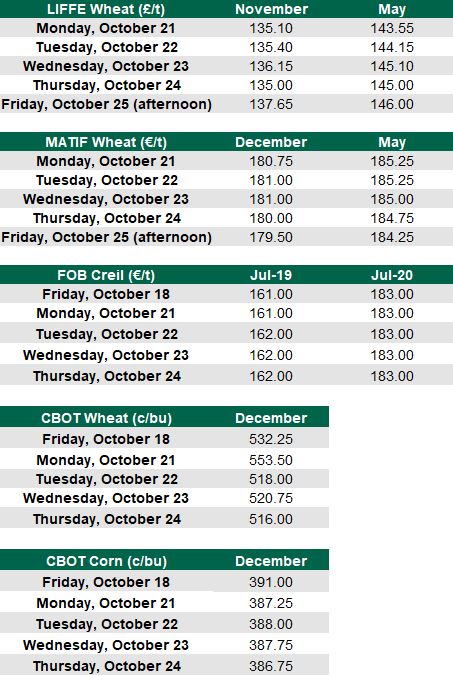