Grain price: Unsettled, but not going to jump anywhere fast

Unsettled might be a word to describe grain markets this week. LIFFE wheat (November and May) climbed all week from a low of £129.75/t on Monday, September 2, and this was while sterling strengthened amid the talks in the UK parliament.

MATIF wheat worked in almost the opposite direction and dropped until Thursday when it took a slight increase. However, it fell back on Friday morning.

A slow start to the US spring wheat harvest is helping prices. However, wheat supplies are still up in the majority of regions.

The International Grains Council (IGC) has estimated that wheat production will increase to 764 million tonnes. The council put overall grain (wheat and coarse grains) production at 2,159 million tonnes - an increase of approximately 1% on the season before, mainly due to an estimated rise in the US maize crop.

The IGC has also reported increased demand for feed barley. However, barley yields also increased in many parts, particularly the EU, this season.

In the UK wheat yields look set to hit their highest since 2015 at 15.6-16.2 million tonnes. Yields are reported to be between 8.8t/ha and 9.0t/ha on average. That's 6-8% above the average yield according to the Agriculture and Horticulture Development Board (AHDB).

Looking at the figures below US corn took a tumble this week - something Irish farmers should keep an eye on.

The Free-On-Board (FOB) Creil - used in the Boortmalt pricing structure - also dropped dramatically this week. Having hit €159/t last week it moved to €157/t on Monday, September 2, before hitting €156/t on Wednesday, September 4. 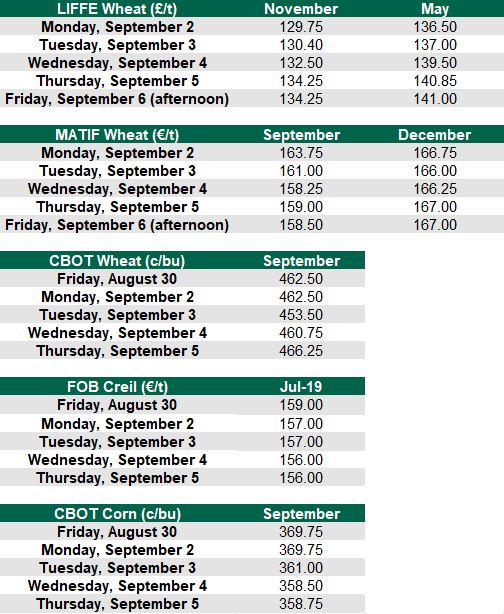