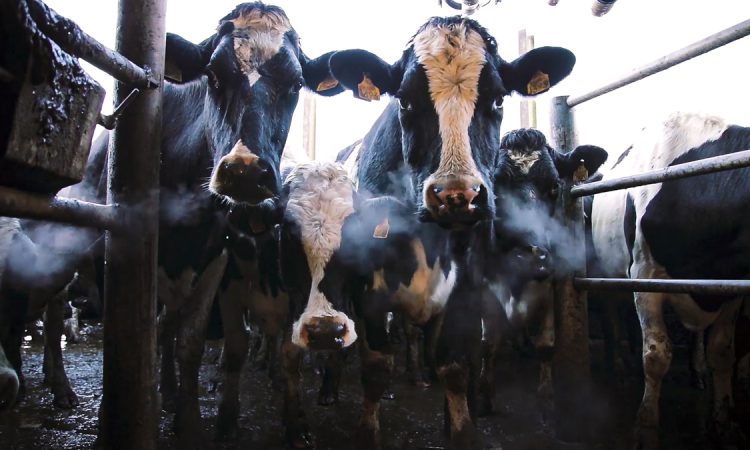 Changes to how Greenhouse Gas emissions will be measured mean Northern Ireland will achieve a larger contribution to the UK’s climate target with the same amount of effort.

Livestock methane emissions will be worth less to the overall target, while carbon dioxide will be more heavily weighted.

The assertion was made by the chair of the UK’s Climate Change Committee during a sit-down interview with Agriland at this year’s Balmoral Show.

Earlier this year, United Nations’ Intergovernmental Panel on Climate Change (IPCC) Sixth Assessment Report stated that the global warming effect of existing methane emissions could be overestimated by as much as three or four times, while the impact of new emissions could be understated.

As a result, the global warming potentials (GWP) for both methane and nitrous oxide have been reduced due to their shorter lifespan, while carbon dioxide was given an increased weighting. However, these changes have to be ratified under the UNFCC process.

The assessment recognises that ‘short-lived’ climate pollutants, such as methane – which is predominantly produced by livestock through enteric fermentation – while extremely damaging in terms of their warming effect, do not accumulate thanks to their relatively rapid natural removal from the atmosphere.

The IPCC report also highlights the effects of different types of methane emissions and stated that it had “high confidence” that methane emitted from fossil fuel sources has “slightly higher emission metric values than those from biogenic sources” [eg. animals], “since it leads to additional fossil CO2 in the atmosphere”.

However, it doesn’t mean that agriculture is off the hook for its methane emissions, as the report also called for a “strong, rapid and sustained” reduction in emissions.

Speaking to Agriland, Lord Deben, who chairs the UK Climate Change Committee, said the CCC was weighing up increasing its recommended target for Northern Ireland as a result of the new science.

He explained that as a result, the actions required to meet Northern Ireland’s 82% reduction target for carbon emissions could in fact now achieve an 84% reduction based on the same recommended actions.

“If the measurement has changed, it means that instead of you achieving 82%, you will achieve 84% with the same amount of effort,” Lord Deben said.

It’s better news in terms of what they can achieve, but it doesn’t make any difference in what they will need to do.”

It’s only that way that you can get the confidence in the people you are talking to – if you fiddle about and try to fix things for their convenience, they will soon suss that out.”

While the CCC’s assessment remains unchanged of what level of reduction in emissions is possible through technology or behaviour change, the recent evidence from the IPCC would change the weight that is given to each of those greenhouse gases in the overall metric.

“This change in weighting is what would increase the overall feasible 2050 target from 82% to 84%, as referred to by Lord Deben, rather than any change in the extent to which physical emissions can be reduced.”

However, Lord Deben explained the changes were no cause for the agri-food industry to be complacent.

“I worry some people, who accept the target we have presented are doing so because they think it’s easier, and I’m not sure whether they are committed to reaching that target,” he said.

Therefore, the pressure I have on them is very simple: If you accept the 84% target – it is tough; it is really tough – and you’ve got to start now.”

Lord Deben went on to add many of the changes which will be required to meet the climate targets would be “change that agriculture ought to make anyway”.

Farmers only need to look below their wellies to see where Lord Deben envisages agriculture’s biggest potential environmental wins.

“It’s very interesting how quickly you can begin to sequestrate a great deal more,” he said.

“We’ve got to cut the hedgerows more sensibly than we always do. Neatness is a great enemy of what we do, and sometimes farmers are too neat about these things; they’ve got to recognise how important the hedgerows can be.”

One solution offered, was a more “regenerative” approach to farming.

“…We have lost a huge amount of nutrient fertility and trace elements in the soil,” he said.

We really have not looked after our most special and precious means of creating food in the way that we ought to. Farmers don’t like when I say that but it happens to be true about modern agriculture. Therefore, regenerative agriculture is going to be the future.

“I like the word ‘regenerative’ because it isn’t a single thing; what it’s saying is that it’s agriculture that takes the soil seriously – and of course, that is different in different places.

“Seeking to grow food in ways that enhance the value of the soil without depreciating that asset.”

It’s not clear yet whether the Department of Agriculture, Environment and Rural Affairs Climate Change Bill, which is based on recommendations from the CCC, will also be updated to commit to the heftier target. The bill (Climate Change Bil No. 2) passed its second stage in the Assembly on Monday, September 27 and is now at the Committee Stage.

A spokesperson for Northern Ireland’s Department of Agriculture said: “The department has not been notified by the UK Climate Change Committee (CCC) of any intended changes to their current advice in regard to their recommendation of the setting of an at least 82% net greenhouse gas emissions reductions by 2050 target for Northern Ireland with local legislation.

“The department will continue to engage with the CCC on all relevant matters relating to climate change, and will consider any updates to advice provided by the CCC once received.”