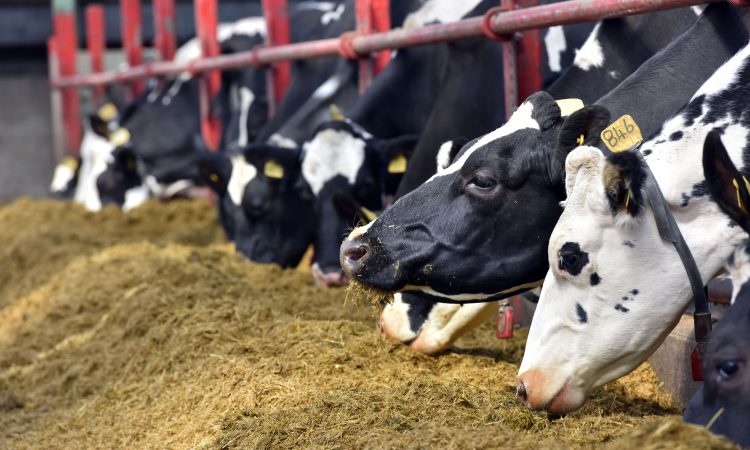 Research carried out at the Agri-Food and Biosciences Institute at Hillsborough has found that homegrown field beans have the potential to replace up to half the imported soya in typical dairy cow diets.

The study, which was co-funded by AgriSearch, involved a series of three experiments to test the impact of introducing field beans to rations at different points in a cow’s production cycle, as well as examining whether different post-harvest treatments would have a differing effect on cow performance.

It found that field beans could replace imported protein sources, such as soya bean and rapeseed meal, at rates of up to 4-5kg per cow per day with no significant impacts on cow performance.

Also Read: https://www.agriland.co.uk/farming-news/do-you-know-where-your-soya-cattle-feed-comes-from/
It’s expected that sourcing high-protein feed closer to home would significantly reduce the cost of dairy cow rations, as well as reducing the carbon footprint of the region’s dairy industry.

AgriSearch chairman Seamus McCaffrey said: “The importance of food security and shorter food supply chains has been highlighted by the current Covid-19 pandemic.

“Imported protein supplements are expensive and subject to price volatility. In addition, the long-term supply of non-genetically modified protein into Europe cannot be guaranteed.

Reducing imports would both increase resilience in the sector and improve the carbon footprint and environmental sustainability of local dairy systems.

“These results demonstrate the importance of research commissioned by AgriSearch. By levering co-funding from DAERA to fund these studies AgriSearch is delivering results that matter to farmers at great value for money.”

A total of 60 mid-lactation dairy cows were used to trial the ration over the 10-week experiment.

All cows were given ad-lib access to grass silage, and were supplemented with 10kg concentrate/cow/day.

As a result, the first experiment concluded that the anti-nutritional factors in field beans have no effect on dairy cow performance.

Similarly, in early lactation cows, no negative impacts were found aside from a slight drop in milk fat content.

“It is likely that these issues could be overcome by changes in ration formulation, thus allowing field beans to be included at higher levels in dairy cow diets,” the study concluded.

A copy of the full technical report is available to download here from the AgriSearch website. A booklet for farmers is currently being prepared and will be published in the summer.