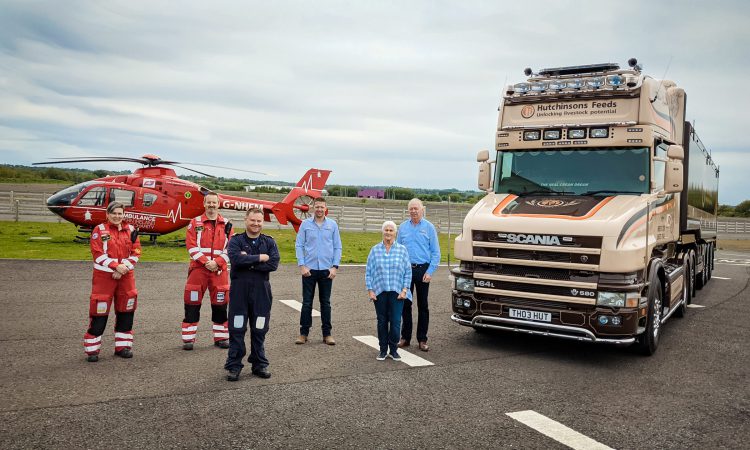 Hutchinson Feeds has announced a three-year partnership with the charity, Air Ambulance Northern Ireland (NI), which includes an annual donation to support the Helicopter Emergency Medical Service (HEMS) alongside promotional messaging on the back of its fleet of trucks.

The family business was inspired to support the charity when the HEMS team was needed by two members of the Hutchinson family.

“We have had direct experience of the medical team and appreciate what they have done for our family and the agri-sector we are part of.

“It feels right to give back what we can as a company, and we hope that by placing the air ambulance logo on our trucks it may inspire additional support from other businesses.”

“Hutchinson Feeds’ commitment is admirable, and we are very grateful.

“It recognises the value they place on this crucial service for Northern Ireland that could be needed by any one of us.

“Our charity needs the support of more local businesses whether that be for gifts or services in kind, support through payroll giving, sponsorship of events or fundraising team building events. We’d love to work together to sustain the air ambulance service now and for the future.”

The HEMS is provided by way of a partnership between Air Ambulance NI and the Northern Ireland Ambulance Service, operational 365 days of the year for 12 hours each day.

The charity aspires to raise £2 million per annum to maintain and sustain the service.