Home » Agri-Business » Hydrogen results in a further award for JCB

Hydrogen results in a further award for JCB 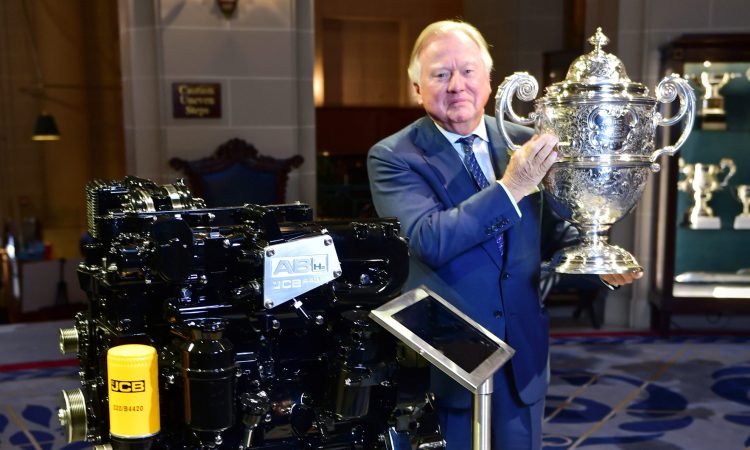 Hydrogen is rapidly gaining recognition as being a serious contender for the replacement of carbon-based fuels.

The latest boost has come with JCB receiving the prestigious Dewar Trophy from the Royal Automobile Club in London.

The Dewar Trophy is regarded as one of the most prestigious awards in British engineering.

This latest accolade for JCB follows on from its launch of a prototype hydrogen-powered Loadall last month and a backhoe loader before that.

JCB’s purpose-engineered hydrogen fuel motor was designed in response to a challenge from JCB chairman, Lord Anthony Bamford to the company’s engineers.

One of the major design aims was that it should not produce any carbon dioxide (CO2).

The newly designed motor harnesses JCB’s existing knowledge and supply chain infrastructure, rather than starting afresh with unfamiliar technology. The company is investing £100 million in the project and has two prototype hydrogen fuelled machines on test.

JCB has been a pioneer in terms of powertrain development since it started building its own engines in 2004. That ethos has continued with its latest hydrogen-fuelled engines, which are an inspiring combination of current expertise and next-generation technology.”

The company has been awarded the prize on two previous occasions, the first for its Dieselmax engine which broke the diesel powered land speed record in 2006.

The second time was in 2019 for its all electric mini-digger.

We’re extremely proud that the Royal Automobile Club has chosen to present JCB with the Dewar Trophy for the third time. Our new hydrogen-fuelled engines can be put into production relatively quickly and it’s an important and pioneering step towards a zero-carbon future, and testament to the amazing abilities of our British engineers.”

The cup is not given on an annual basis, but only when the “club’s expert committee believes that there are contenders of sufficient merit”.

Over the last 20 years it has been awarded 15 times with 10 of those occasions recognising significant advances in energy saving systems for various vehicle types.