Home » N.Ireland » ‘I want to continue raising the voices of women in agriculture’

‘I want to continue raising the voices of women in agriculture’ 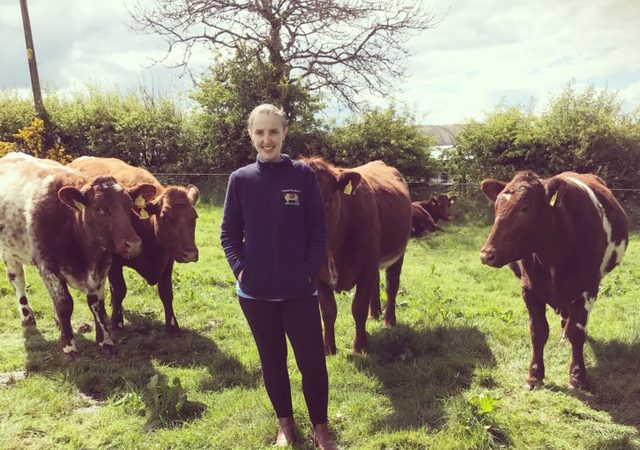 “I want to continue raising the voices of women in agriculture.” That’s the perspective of 28-year-old Ruth Parkes from Armagh who is behind the hashtag #Agriwomen24.

“Last August, I decided to set up my Instagram account to connect more with women in agriculture so I started my page ‘Ruth’s farming life’.

“It’s been inspiring to see so many women across the world farming cattle, sheep and arable crops and hear their voices. It’s a great platform to share your own farming tips and methods and to learn from others in all aspects of farming,” said Ruth.

“You make friends with people who actually have a keen interest in farming. One such friend was Kathryn Taylor, a calf rearer / dairy worker from Wales. We became really good friends and decided to collaborate and give an insight on social media of our different backgrounds and work.

“Kathryn comes from a non-farming background and works in the dairy sector, whereas I grew up on a farm and, although I have some experience of the dairy industry, I deal primarily with the beef sector.

“We wanted to highlight what a typical day in our lives is like. When I posted it on social media, advertising that it would be happening on June 26 and 27, we got so much support for it, I decided to pursue it further and created the hashtag #Agriwomen24, inspired by #Farm24,” said Ruth.

“I wanted to get women in ag involved in what we ourselves were doing, showcasing the role many of us play within the agri industry from beef to dairy, arable, poultry, office work, wife, mother, etc.

“I wanted to give women the opportunity for their voices to be heard and to share their different journeys into agriculture and how they got where they are now. So many women came forward and shared their inspiring stories and experiences of being a woman in ag.

Half of the women involved in the initiative didn’t come from a farming background and came to be involved through their husbands, boyfriends, friends or undertaking an agriculture subject at school. More and more women are becoming involved in helping to provide ‘farm-to-table’ and are thriving in doing so.

“The initiative was supposed to only run from June 26 to 27, but we got so much support for it, we decided to extend it to the following day. It was overwhelming to see so many women, of all ages and even across the world, come together and speak of their experiences. We’re just two small Instagram accounts so we definitely didn’t expect the response we got,” Ruth said.

“However, we were able to utilise Instagram as a platform for women to engage and connect with one another from those who have been farming for years to those who have recently come into the industry. All these women are truly inspiring.

“Hopefully, we were able to bring some positivity on women in ag. Hopefully, we will be able to make it a yearly event and have an even bigger response next year. I want to continue raising the profile of women in agriculture and providing opportunities for their stories and voices to be heard.”

Ruth currently works as a full-time pharmacy dispensary assistant and farms part time in the evenings and weekends with her dad.

“We run a 60+ beef herd on an 80ac family farm, comprised Limousins and pedigree Shorthorns; a breed I brought onto the farm last August,” she said.

Being born into a fourth generation of farmers, there was no doubt that farming was going to play a huge part in my life. Growing up on a Limousin beef and dairy farm, as well as keeping Hampshire Down sheep, there were always jobs needing done, from helping clean out the animals, feeding calves and pet lambs to standing in gaps and opening gates when moving them – everyone’s firm favourites on the farm.

“This continued into my teenage years until I went to Queen’s University Belfast to study for my modern history degree. While studying I couldn’t commit the same time to the farm as I previously had and so in turn I didn’t have the same interest.

“I would have helped daddy with the odd jobs when asked to but I wouldn’t have actively sought jobs out. It was during this time at university that we reduced our stock to just Limousin beef cattle,” she said.

“However, once I graduated from university and took up my current job as a pharmacy dispensary assistant, everything changed.

“Having the evenings and weekends free, I began to resume my former role on the farm and I fell in love with farming all over again. The more I became involved on the farm, the more I wanted my own herd of cattle. Limousins are a great breed but I wanted to move away from them and bring a different breed onto the farm,” said Ruth.

“So one night I got my dad to phone our neighbour down the road to see if we could go and look at his herd of pedigree Shorthorns. He showed us every last cow, calf, heifer and bull about the place; his passion for the breed was as clear as night and day.

“After walking through the herd, I knew this was the breed for me and I ended up buying eight pedigree Shorthorn heifers back in August 2019 and Parkview Shorthorns was created. Since then, I have grown the herd which now stands at 12 heifers; one Shorthorn stock bull; and three calves,” she said.

So what has her experience of being a woman in agriculture been like?

“I’ve only ever had a positive experience of being a woman in agriculture, for which I’m extremely lucky as know this is not the case for all women.

Growing up alongside my sister, with no brothers, we were expected to help out on the farm regardless of our gender. We were seen as capable and well made for any job that needed undertaking. We were always encouraged to get involved and to this day I am still being encouraged by my family and friends to pursue my love of farming.

“When starting my own Shorthorn herd last August, I was met with comments such as: “Are you mad getting into farming?”; the typical farming banter from men but they were so supportive and encouraging.

“Many said it was great to see a young girl getting more involved in farming and I can only say the same from comments I’ve had across social media. For me personally, I don’t think farming is seen as a traditionally male domain anymore, a view held by previous generations.

“I think the wider farming community is willing to embrace more women coming forward into the industry and are only too happy to work alongside them.”

Combining her work as a pharmacy dispensary assistant with highlighting the voices of women in agriculture, it has made for a busy few months for Ruth.

“At the beginning of Covid-19, work was very overwhelming, both mentally and physically. You were going into work earlier in the mornings and staying later in the evenings to try and get caught up on your work as the volume of prescriptions and phone calls we had to process during working hours was relentless.

“Thankfully now, as we return to normality, or what we can call normality, things have calmed down a lot,” she said.

For me, farming was my life saviour during the pandemic. When I got home from work in the evenings and on the weekends, farming provided me with a much-needed distraction from the craziness of work and it allowed me to shut off and not think of Covid-19, which was and still is a scary situation.

“It was tough going, mentally and physically, but I just kept going, I had to,” said Ruth.