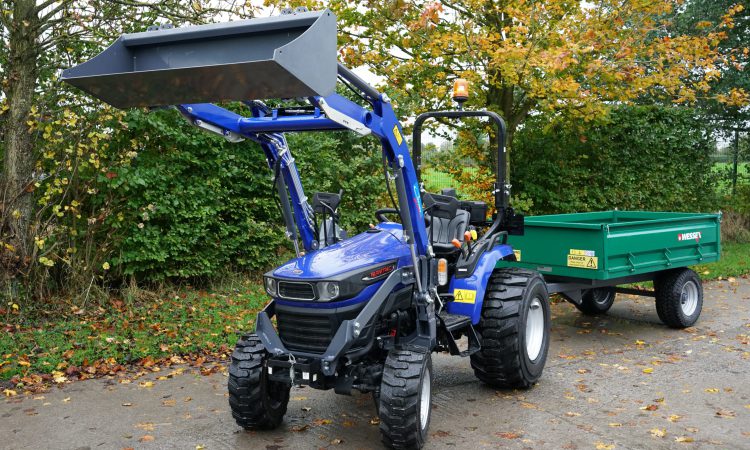 India makes a lot of tractors – nearly 900,000 in the latest accounting year – and there is a lot of competition for a slice of that pie, with at least 15 manufacturers vying for farmers’ business.

With such a fierce home market and the biggest brand dominating the scene, selling around a third of a million units, it should come as no surprise that smaller companies are looking to further utilise their capacity and increase sales through expansion abroad.

The latest company to make a determined effort to enter Europe is the Escorts Group which sells under the names of Farmtrac, Powertrac and Digitrac.

It vies for position as the third largest maker in India with Sonalika, makers of Solis tractors, a name that we are already familiar with.

The Escorts Group has recently partnered with Reesink Turfcare of Co. Kildare in Ireland which will be responsible for the import and sale of the machines.

Reesink is a global distribution company which has the experience and expertise to offer manufacturers a fully fledged distribution service within a number of countries.

It is Dutch in origin and takes full responsibility for a machine once it has left the factory, allowing the original equipment manufacturer (OEM) to concentrate on manufacturing, rather than diverting its energies towards sales and distribution.

This autumn, it launched the Farmtrac brand of tractors on behalf of the Escorts Group, from its base at Nurney, former home of the Lely forage division.

Although the Farmtrac name is not a total stranger to Ireland, what is new is a range of compact tractors and a determination to make an impact at the smaller end of the market, before moving up the scale.

All new compacts from India

There are two models in the compact range that are entirely new from the ground up. The smallest is the Farmtrac 22 which has a 21hp engine while the second is the Farmtrac 26 which offers 24hp.

In addition to these, there is a 26hp model which is battery-powered and has been available in other markets for the last two years.

Power in the diesel models is courtesy of a Mitsubishi three-cylinder unit which was chosen because its dimensions are somewhat less than the present Escorts engines, which date back to late Ford designs.

The 9×3 transmissions are Escorts’ own units while the axles are sourced from Carraro. Brakes are wet discs, and there is a choice of tyres which includes the standard agricultural type, turf tyres or industrial tyres.

The latter are offered as a ‘half way house’ between the two more normal types, and it is claimed they can be used in most farm situations, as well on on fine turf thanks to their generous width and low ground pressure.

On the larger model there is the option of hydraulic drive, or HST as it is dubbed by the company. This does away with the final transmission but retains the three ranges with an instant response when switching direction.

The Farmtrac electric is not quite so new, having been launched in 2019. However, it has only just become available in Ireland having enjoyed success elsewhere.

The two great questions concerning anything with a battery is what is the running time and how long does it take to recharge?

The answer to the first is very much dependent upon how it is used. Customer experience of units already sold suggests that four to six hours is a reasonable expectation for working time.

Recharging takes eight hours from a 13amp socket. Presently there is no fast charge facility available, although that is likely to change at some point.

The tractor has two electric motors. The larger traction unit is a 15kw motor which drives the transmission.

The smaller one is 3kw and it drives the auxiliaries and power steering. To help preserve battery charge each may be switched on or off manually as required.

Small Asian tractors, including those from India, have a reputation for appearing on the market for a short while before, once again, slipping off the radar.

The Escorts Group would appear to be taking a much more robust approach to getting established in the European market.

In addition to the new compact tractors mentioned here, larger horsepower models will also be coming into the country. These are predominantly Perkins-powered and will provide up to 122hp in the largest Farmtrac – the 9130.

The new compacts already meet Stage V emissions standards, as will the bigger tractors from the new year, when other updates to these Polish-built machines are expected to be announced.