Is thinking ‘white’ the secret to Northern Ireland’s best blues? 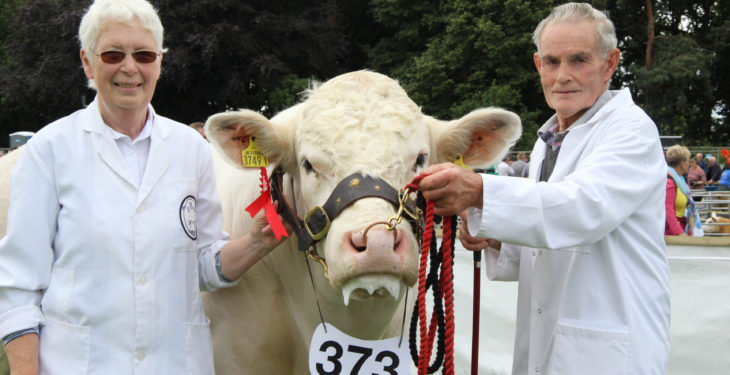 A Co. Antrim British Blue herd which selectively breeds for white cattle has wowed judges in the north.

Jack and Anne Morrison had their thoughts focused on the upcoming autumn bull sales when they got the news their herd Chatham British Blues had won the 2017 Bimeda UK Northern Ireland British Blue Herd of the Year competition.

The news comes almost exactly 30 years after the Chatham herd was founded in 1987.

Based on pure white cows, the herd, which is based in Armoy, produces white bulls that can sire blue and white beef calves. Chatham also won its category – best large herd.

What started as a few straws of semen on the commercial herd soon became the breeding focus for the farm.

Anne Morrison said: “The benefits of this new breed were immediately obvious – the high-grade carcasses of saleable lean meat were found to be in keen demand at a premium price.

“The short gestation period and docile temperament of the British Blue were some of the deciding factors in the establishment of this herd. Pedigree embryos and heifers were soon purchased and proved to be a successful foundation for our cow herd today.”

Today the pair farm with their eldest son, David, and breed towards strength and conformation.

The Morrison family has long enjoyed success at major shows and sales in Northern Ireland and at the Borderway Mart in Carlisle.

And one of their latest stock bulls, Chatham Karl, is already collecting awards – including Senior Champion at the Pedigree Calf Fair and Reserve Champion at the Antrim Show.

Morrison added: “We bought our first heifer in 1987 from Tom Ashton and we were told white or powder blue were the colours to go for – and we haven’t changed since. I don’t know many other breeders who do that, most of them go for the colours.

“We started by aiming to breed white bulls because they were the most popular with the dairy herds.

They produce nice blue and white calves when crossed with Holstein worth between £300 and £400.

“The judge said we had good cattle which were clean of the middle. And we’ve also had a lot of success with our latest stock bull Chatham Karl. He’s only been out twice and has picked up awards both times and has a good set of figures.”