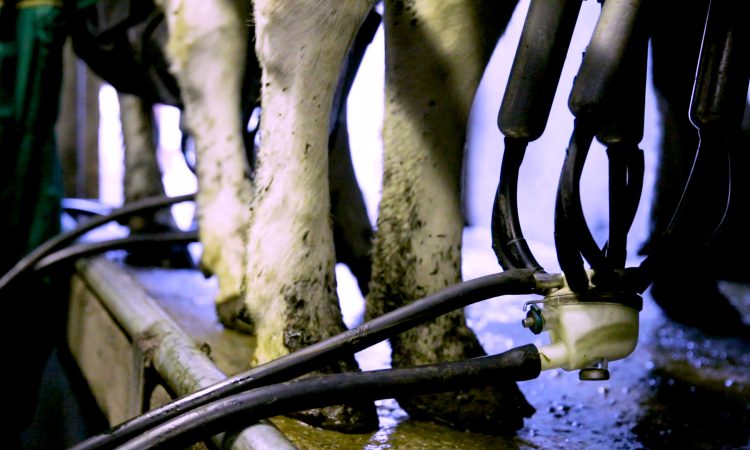 The island’s milk pool faces a “ridiculous scenario” where milk produced in the Republic of Ireland is often no longer deemed Irish if it is processed north of the border, a major cross-border processor has warned.

The issue came to light this week after a controversial advert run by the Irish Farmers’ Association (IFA) accused retailers of trying to use in-house branding to push down milk prices.

The adverts have raised a few eyebrows, with an industry source explaining they could be an attempt to pressurise retailers into buying only NDC-approved milk, rather than from cross-border companies.

Lidl‘s milk is supplied by Aurivo and Strathroy, while Aldi’s comes from Strathroy, Aurivo, Lakeland, and Arrabawn.

The dairy companies weren’t mentioned directly in the advert; however, with the exception of Arrabawn, they are all cross-border processors.

The milk supplied to the supermarkets originates from the Republic of Ireland. However, depending on where the milk is processed, it may not be eligible to carry the National Dairy Council (NDC) brand for Irish milk.

‘Wexford milk processed in the North is no longer deemed Irish’

Ruairi Cunningham of Strathroy Dairy said he would not comment on the adverts but told AgriLand that the situation highlighted the “ridiculous scenario” facing the 5% of the island’s milk pool consumed locally.

Cunningham highlighted that local liquid milk consumption played a relatively small part in the island’s milk, accounting for around 5% of production.

“There was a New Zealand auction today that has far more impact on farmers in Ireland than what the supermarkets are doing,” he said.

Cunningham said he thought the issue would have been resolved after Brexit and added that he wanted to see all milk from the island included under the NDC brand.

Currently, Cunningham said he felt different rules applied to the way the 95% of Irish milk which is exported is marketed than the 5% consumed domestically.

“Over the last four years (from the Brexit vote to when the UK eventually left the EU), the talk was of Ireland as a ‘food island’ and how interlinked the north and south were and how that had to continue and that was one of the over-riding concerns.

“From a commerce point of view, it was essential that the border had to remain invisible – and, thankfully, that has happened.

The argument made back then for why there couldn’t be a hard border was that milk was travelling in both directions across it. What they are doing now completely goes against the arguments that everyone was making.

Cunningham explained that Strathroy – at great cost – had already established separate production lines for milk from the Republic of Ireland and Northern Ireland.

He said the firm’s creamery was regularly audited by both supermarkets and they were satisfied that lines were kept separate.

“Whatever way we can make the production, collection, and ultimately selling of that product more efficient has to be good for the farmer,” he said.

Ultimately, what you want to do is get a better price into the farmer’s pocket, and if we can do anything to aid that, we will.

“But these sorts of barriers are examples of the tail wagging the dog.”

ICOS – the Irish Co-operative Organisation Society – had also backed calls for milk produced anywhere on the island to be labelled as ‘Irish’ – something the body has been campaigning on for the last four years.

However, it’s not the first row over terminology. The Republic of Ireland’s application for Protected Geographic Indication (PGI) status for ‘Irish Grass-Fed Beef’ did not include producers north of the border.

The issue caused much consternation among the Ulster Farmers’ Union (UFU) and Livestock & Meat Commission (LMC), who feared that, if granted, the status could prevent farmers in Northern Ireland from using the term to describe their produce.

The application has now been submitted to the European Commission for consideration, with the only assurance ultimately given to northern farmers that the republic could consider widening the application at a later date.