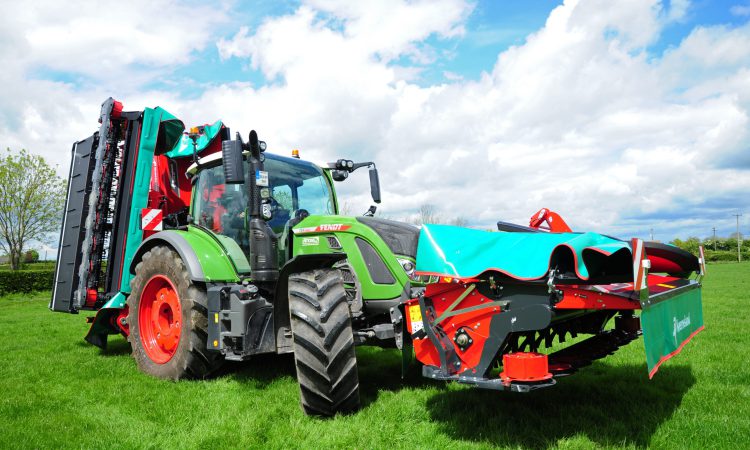 Kverneland is looking to lighten the load on tractors by introducing detachable groupers on its butterfly mowers.

Although the company may not be the first with the concept, it believes that it has the fastest methods on the market for doing so.

Dubbed the BX Belts, the demountable units will be available in Ireland / UK this year.

The company claims that they can be removed in less than 10 minutes, although it is suggested in its marketing videos that the actual time taken could well be less.

Fitted to its 53100 series mowers, Kverneland notes that fitting grouper belts offers improvements to productivity and quality of output, by bringing 10m cut into one large swath, ready for direct pick-up by the harvester.

However, at other times grouping may not be desirable or necessary, so the belts, at 600kg in total, become dead weight on the back of the tractor.

This can increase fuel consumption and reduce stability on the headlands.

The belts are removed by inserting purpose built trollies under the unit, a mounting pin is then removed, the hydraulics disconnected and then moved away.

To expediate the process, the oil lines use a coupling device similar to those found on front end loaders. Once removed, it also disappears from the in-cab display unit.

Although the first machine featuring the demountable system is yet to arrive in Northern Ireland, Agriland took a preview of the latest 53100 set of rear mowers which are to be used as demonstrators.

Mounted on a Fendt 724 Vario of 237hp, the outfit is attached to a tractor at the lower end of the recommended power range.

Due to impending rain it was not possible to see it in action as intended, but Kverneland’s key account manager, Allan Hetherington, is confident that the tractor will be quite capable of handling the mower.

Driving the tractor for the season is Diarmuid Longerhan, who believes that one of the major attractions of the new mowers is the suspension which connects the main body to the support arm.

Known as the Quattro Link, it is a parallelogram linkage which enables the bed to float over the ground at a selectable ground pressure.

The linkage also allows a vertical displacement of 700mm and limited rotation around the mounting point to accommodate undulating ground.

Cutting width can be adjusted from 9.8m to 10.2m with each side being adjusted independently or together. This enables either unit to be moved inboard on corners to prevent uncut strips of grass being left.

The grouper belt units have four features designed to increase efficiency, and leave a tidy swath that the following harvester or baler can collect with the minimum of travel.

The first two are adjustable belt speed and adjustable height, which together dictate the width and shape of the swath.

The remaining two are auto stop and a belt boost function. This latter function accelerates the belt momentarily, as the mower is lifted out of work, thus clearing it before turning and then stopping it altogether.

The effect is to reduce the amount of cut grass left out of the swath at the headlands.

Using two levers mounted on the inboard end of the mowers, the conditioner hood can be tilted to provide a variation in condition effect.

Steel tines are usually fitted to models coming to Ireland, but roller versions are also available.