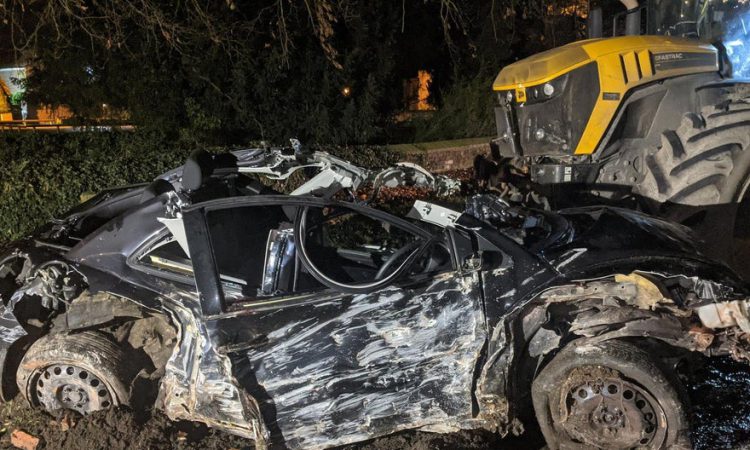 A road in York in the UK was left covered in slurry following a collision between a Volkswagen Beetle and a JCB Fastrac tractor which was towing a slurry tanker.

The Beetle was crushed by the JCB on the A19 and police have spoken of how it was a “miracle” that the passengers survived the devastating crash.

One of the passengers of the Beetle had to be rescued from the wreck by firefighters and was taken to hospital with non life-threatening injuries.

The driver was taken to hospital having suffered minor injuries and the driver of the JCB suffered no injuries in the collision.

The road was closed for several hours while police cleared up the road from the contaminated substances in the tanker and investigated the accident.

Police are asking for anyone who witnessed the collision, or saw either vehicle beforehand, and who has not already spoken to police, to email: [email protected]; or call 101 quoting reference number 12200222506.

Collision between car and tractor

In other road-incident news, last month a collision which took place between a car and a tractor left one man seriously injured.


“Police investigating a road traffic collision in Killough on Thursday evening, November 26, are appealing for witnesses or dashcam footage,” said PSNI officers based in Co. Down.

“We would appeal to anyone who witnessed the incident or who may have dashcam footage to contact Police on 101, quoting reference number 1458 of 26/11/20.

“Alternatively, information can also be provided to the independent charity crimestoppers on: 0800-555-111 which is 100% anonymous and gives people the power to speak up and stop crime.”