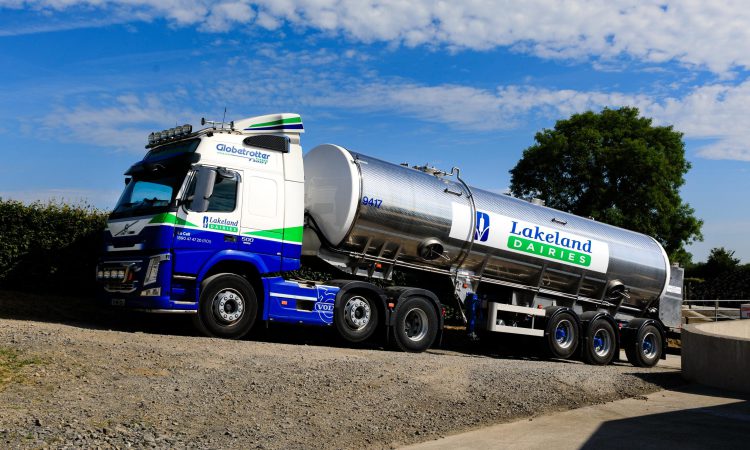 Lakeland Dairies has become the latest processor to announce its milk price for December, revealing a held base price with a December bonus.

In the Republic of Ireland, a base price of 32.28c/L including VAT and lactose bonus will be paid for milk supplied in December. This is the same base price as November.

The normal out of season bonus applies for December. A special Lakeland Bonus of 1c/L plus VAT will also be paid for December milk (this was also paid for November milk).

In Northern Ireland, a base price of 26.55p/L will be paid for December milk. Once again, this is the same base price as November.

“In general, the global dairy markets are steady with the supply and demand dynamic largely in balance as we start into 2021.

However, there is always a concern over the pace of milk supply growth in many of the main dairy supply regions including New Zealand, the US, South America and the large European countries of France, Germany and Britain, which can significantly impact dairy market prices.

“While commodity prices are in a generally stable position, the current and most serious wave of Covid-19 is of major concern to the entire sector.

“Buyers are remaining cautious in managing their way through this current volatility and this will continue for the early months of the year.

“The pace of the global vaccination programme is likely to have a considerable influence on where the dairy markets, particularly foodservice, will be as we head into the peak spring season across Europe.

“In terms of Brexit, we strongly welcome the Free Trade Agreement (FTA) that was signed on Christmas Eve.

A no-deal scenario would have created a hugely difficult situation. There are some transport, trade and administrative disruptions as a result and the long-term impact from the UK’s exit from the EU will only be seen in the weeks, months and years ahead.

“However, we are dealing with all such matters appropriately and efficiently.

“Lakeland Dairies will continue to monitor the market closely in the coming weeks,” the spokesperson concluded.