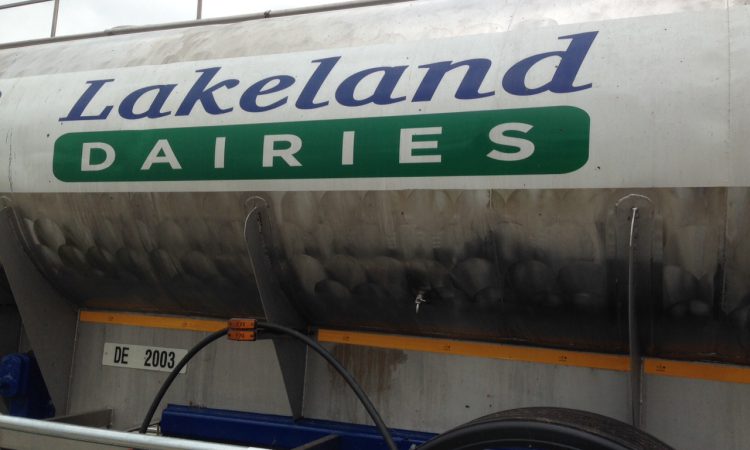 The board of Lakeland Dairies has increased the co-operative’s milk price for October and is the first processor to reveal its price for last month’s supply.

In the Republic of Ireland, Lakeland Dairies has increased its milk price by 0.5c/L and will pay a base milk price of 38c/L, including VAT, for milk at 3.6% fat and 3.3% protein.

In Northern Ireland, Lakeland Dairies has increased its milk price by 0.4p/L and will pay a milk price of 30.5p/L.

Strong purchasing and consumption from Asia is also a key market driver.”

Lakeland Dairies said it will continue to monitor the mar­ket closely in the coming weeks.

Yesterday (November 10) an October milk price of more than 40c/L was predicted by the Irish Creamery Milk Suppliers’ Association (ICMSA).

Following a meeting of its dairy committee, the ICMSA’s dairy committee chair, Gerald Quain said they expect processors to announce a price that will be in excess of 40c/L when prices are revealed over the coming week.

“The serious upward momentum behind the rise in dairy markets should result in substantial rises in base milk prices for October milk,” he said.

Even without added value, the Ornua purchase price index (PPI) is showing prices rising by over 1c/L and, when added value is accounted for, the price is well in excess of 40c/L.”

Dairy farming is entering an uncertain period in terms of regulation, climate mitigation and input costs increases, and the price that farmers receive is going to have to reflect these new realities, he added.