The hammer went down at 11,000gns for the top priced animals at this year's British Limousin Cattle Society sales at Stirling on Monday (October 22).

Strong and sustained demand for the Limousins the sale saw 10 more bulls sold on the year before, and increase in averages for the 51 sold to £5,182 up by £119.

This May 2017 born bull had taken first prize in the last class of the pre-sale show before taking the Overall Championship from judge Michael Robertson, Fodderletter Farms, Ballindalloch, Banffshire.

By Goldies Goldfinger and out of the Newhouse Billy sired Knock Hopscotch, this bull carried some excellent performance figures, most notably for 200 and 400-day growth.

Commenting on the Champion, Michael Robertson said: “My choice of Champion is a big powerful, correct bull for his age who carried plenty of style.

"He had a great top, a nice head, and very good locomotion. I feel this bull would be suited to both pedigree and commercial herds.”

The judge’s words proved to be spot on as the Champion was bought by the well know figure Terry Coghill who runs both a pedigree (Hekra herd) and commercial Limousin herd at Muce Farm, Birsay, Orkney.

Breeder Albert Howie said he was "delighted" by the news.

“Knock Nicol has been a good calf since the day he hit the ground and we always had high hopes for him," he said. 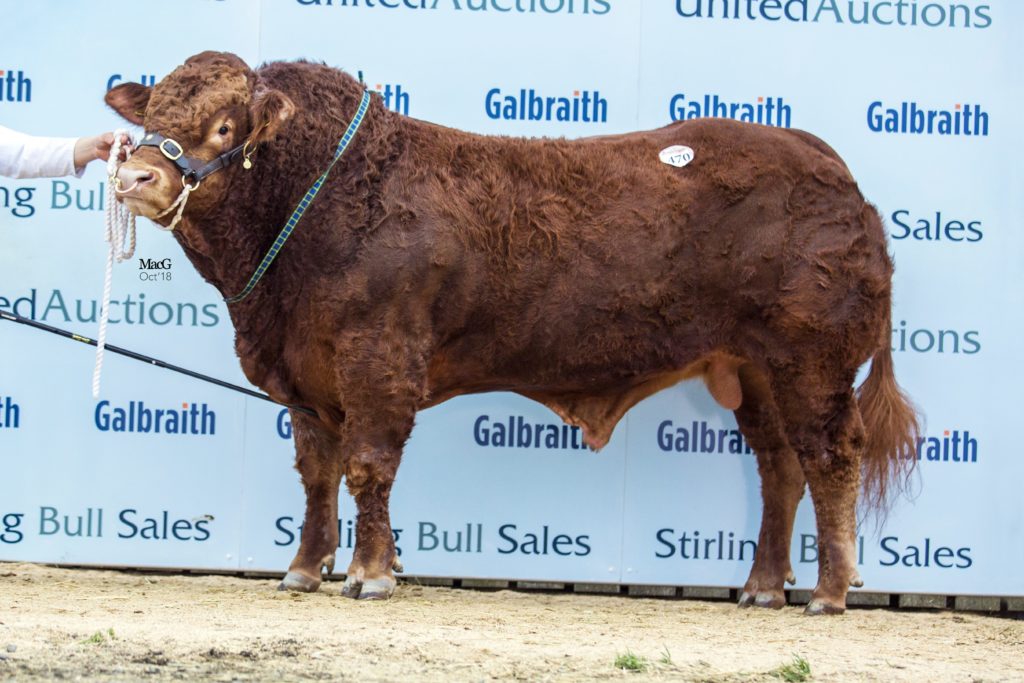 Another from the final class, and the second youngest in the catalogue, this June 2017 born bull is by Glenrock Ventura and is out of the nine-year-old Burnbank Evita.

Sporting some excellent performance figures across the various traits this bull was shared by the Newhouse pedigree herd of Robert M. Adam & Son, Newhouse Of Glamis, Glamis

Over the course of the Stirling and Carlisle sales, held within three days of each other, the tremendous demand for Limousin bulls by commercial producers was evident.

In all, 169 bulls were sold over the two sales to average just under £5,500. Numbers of bull sold was up on the year at each centre with strong clearance rates of 83% and above. At Stirling, the sale average was also up by £119 on the year.

Speaking after the Stirling sale, the British Limousin Cattle Society chief executive Iain Kerr said: “In what has been, and remains, a challenging industry, these sale figures show the confidence in the breed commercial producers have to deliver performance and profit as they future-proof their businesses.

"At the Stirling sale, and continuing from the weekend, easy calving, easy fleshing bulls with plenty of scope and growth potential were in strong demand and easily sold.

"There’s a clear recognition that fast finishing progeny hitting the target weights required by the market is both efficient and profitable and that Limousin delivers just that. Over the three days, easy-calving and efficiency were very much the sale buzzwords.” 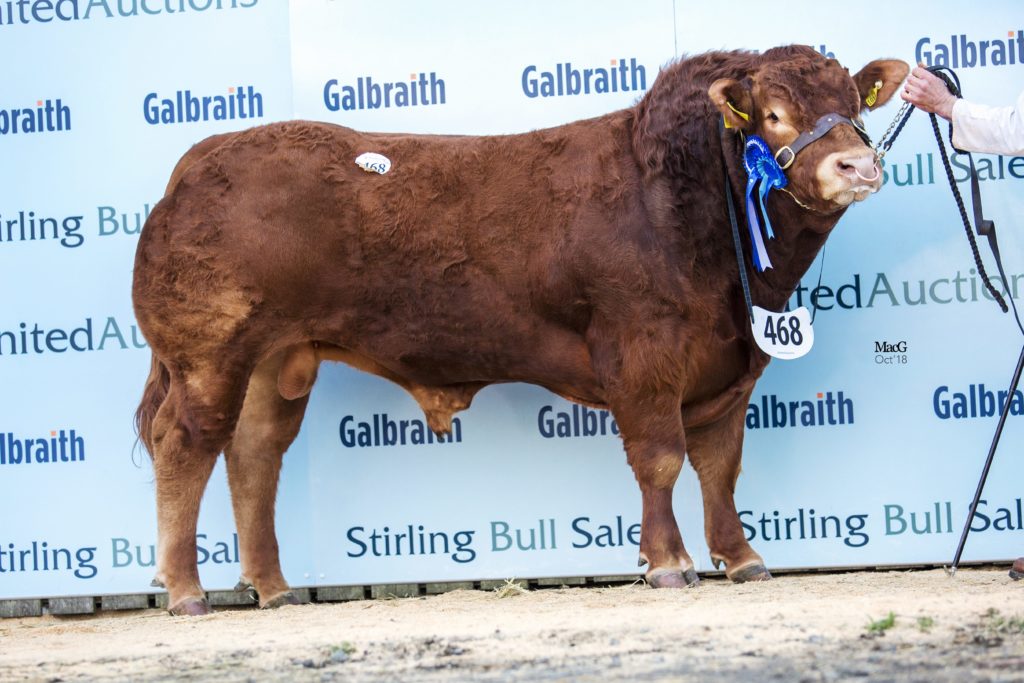 Standing second in his class to the Champion and Reserve Junior Champion was Homebyres Nistleroy from J. Logan, Humebyres, Kelso.

Got by AI, Homebyres Nistleroy is by Fairywater Haig and is out of Homebyres Floricity, who is back in calf again to the same bull.

This stylish young bull was snapped up the judge Michael Robertson, Fodderletter who runs sixteen pedigree cows and a 100-strong commercial herd.

For the Logans, the 10,000gns price topped their previous best at Stirling (8,200gns) and came hard on the heels of a strong sale at Carlisle two days previously where they sold two bulls at 10,000gns and one at 6,000gns.

As well as their joint top price, D&L Graham, Mains of Burnbank Farm, had helped to get the sale off to a good start when the second bull in the ring, Burnbank Millenium, made 8,500gns. 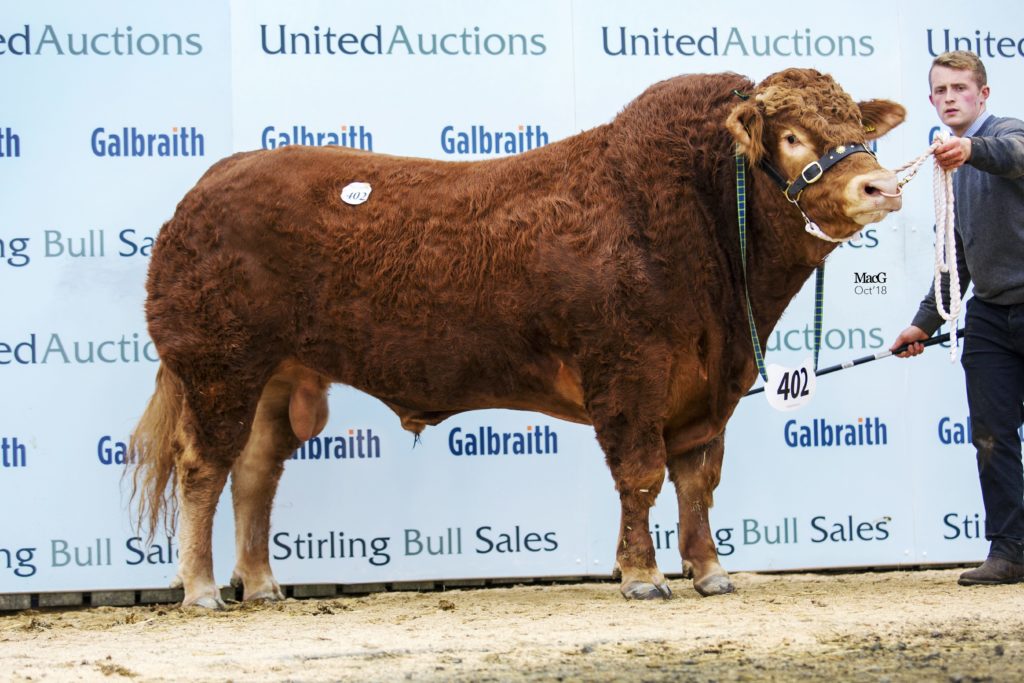 This bull stood second in his class to the Reserve Senior Champion in the presale judging.

November 2016 born Millenium is by the popular AI sire Ampertaine Gigolo and is out of Burnbank Gypsy, a Rainbow Simon daughter. 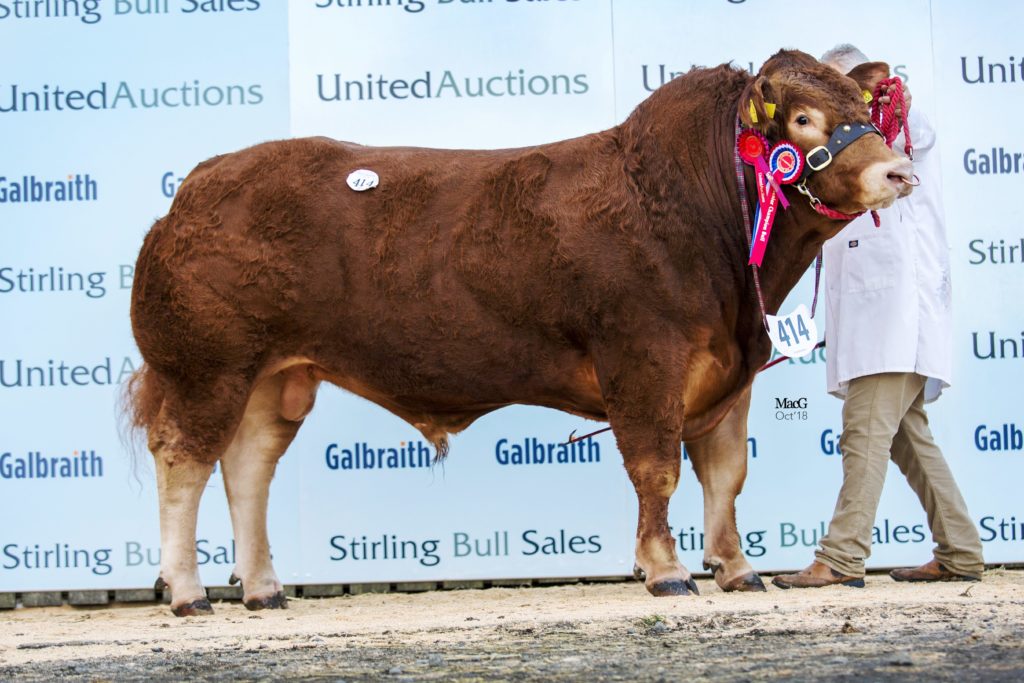 He came to Stirling with a decent show record behind him having won first prizes at both the Stars of the Future Show and the 2018 Royal Highland.

A big, powerful bull, who weighed in at 1,025kgs, Strawfrank Nevada was knocked down to Chas McMillan, Ardbeg Farm, Isle of Islay. For the 30-cow Strawfrank herd the 8,200gns price was their best at Stirling to date. 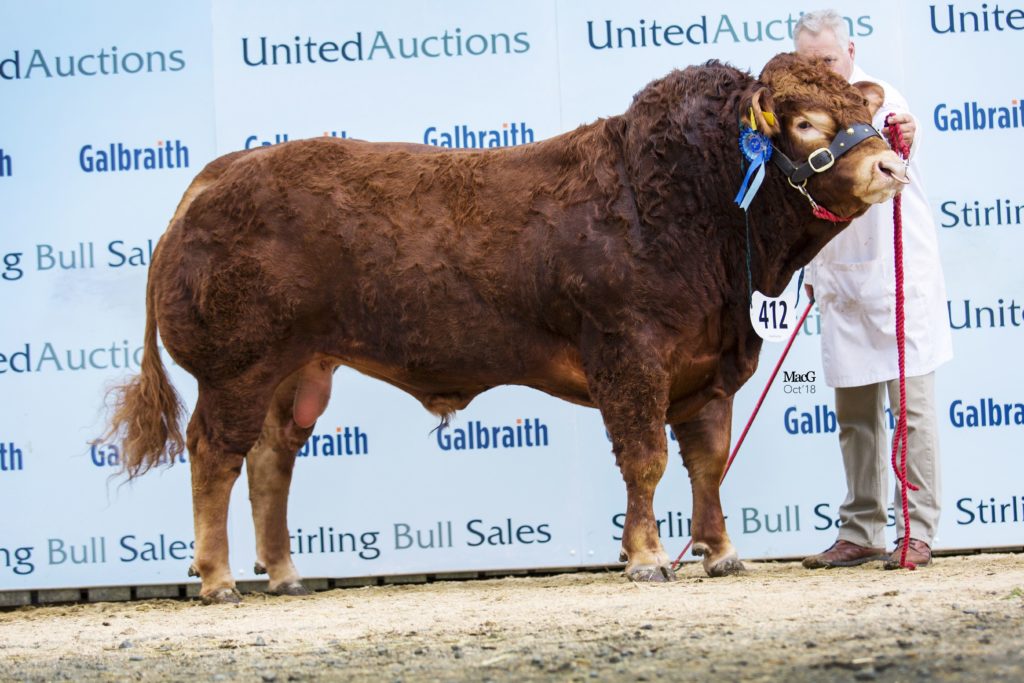 Another bull with good performance figures, Strawfrank Nero is by the 45,000gns AI sire Ampertaine Jamboree and is out of Siddall Harriet, an Ionesco daughter.

In the second class of the day Strawfrank Nero had stood second to his stablemate the Senior Overall Champion. 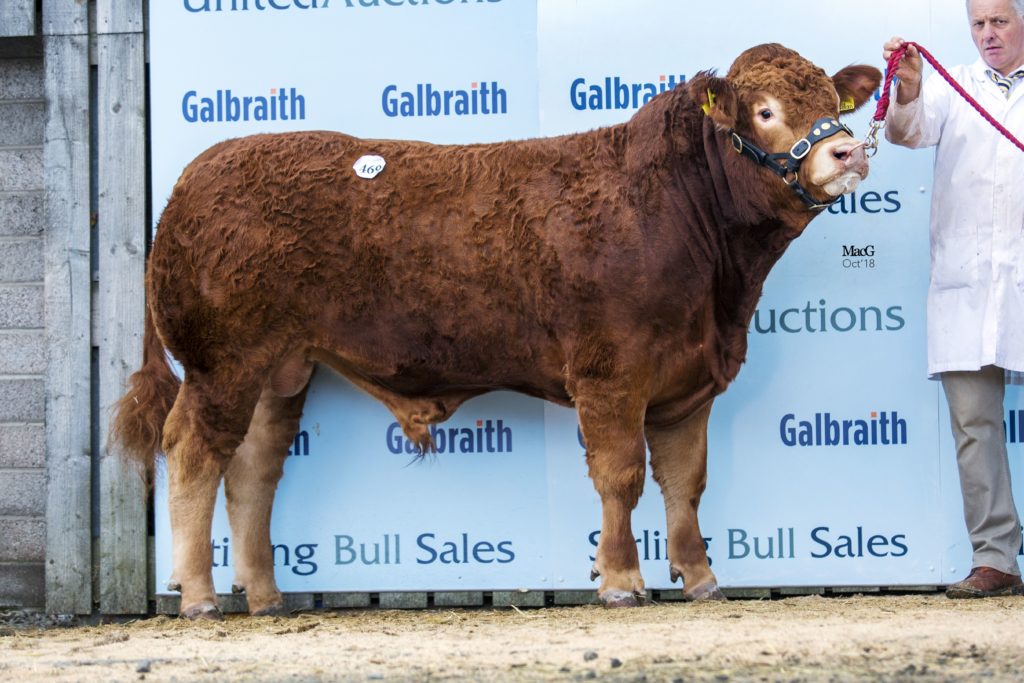 Late in the sale, and with another from the strong final class, Allan Campbell made 6,600gns when selling Strawfrank Nolan, a Homebyres Guthrie son to D.A. MacCormick, Balligarve, Lismore, Argyll.

April 2017 born this bull is one of the first sons sold at Stirling by the herd’s 19,000gns stock sire Millgate Jukebox.