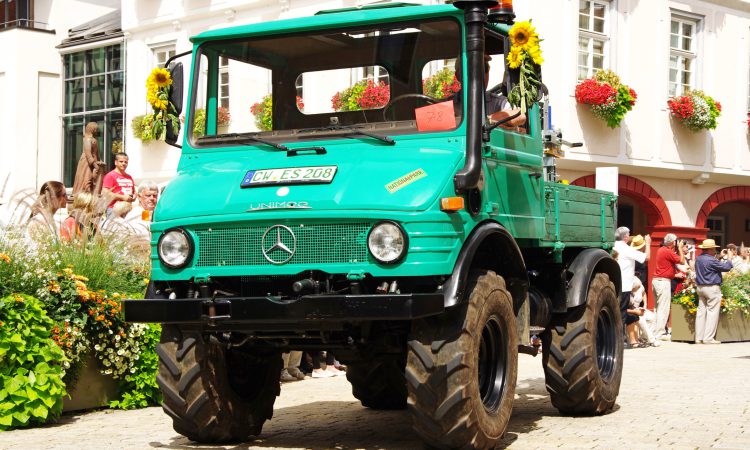 The exact origins of the Unimog are shrouded by the events World War II, with the generally accepted narrative being, that it was a product of post-war Germany, yet there is the strong suggestion that its design had first been drafted as early as 1942.

Whatever the actual circumstances of its origin, it is certain that the first prototype was up and running in late 1946, less than a year after the project was officially started by Albert Friedrich, head of the aircraft engine department at Mercedes, when the war ended.

The name itself portrays its design brief – Unimog being short for Universal Motor Device. This outlines the intent of the machine, not only as a tractor but also a truck and people carrier.

Such multi-tasking was not unique on the continent where there was a wider take on the purpose of a tractor, unlike the the Anglo American approach which was far more focused on farm work only.

The Lanz Bulldog was the epitome of the continental ethos, being conceived as both a farm tractor and road locomotive.

The British were not totally immune to this influence with the David Brown VAK1 being fitted with extra seating and sometimes adapted for road haulage.

What made the Unimog substantially different to other tractors was its forward control position and load carrying platform.

Its other defining feature was the chassis that formed its base, a direct departure from the standard practice of building tractors around a spine consisting of the engine and transmission.

It is easy to think of the Unimog as a truck adapted for the field, yet its primary purpose was as an agricultural vehicle with a track width designed to span two rows of potatoes.

The vehicle was also geared for oversized wheels shod with cleated tyres, and a whole raft of farm attachments, such as a front end loader, were available to bolt straight on to the vehicle.

Starting life in a toy factory

Production began in earnest in 1948 although not by Mercedes Benz which was, at the time, barred from producing vehicles with military potential.

The company that first produced it was Messrs Boehringer, a business more associated with toys and craftwork whose factory was situated at Schwabisch Gmund, in central southern Germany.

Due to demand and the US encouraging the war ravaged European countries to reconstruct their industrial bases, the facilities and available resources soon proved inadequate and so Daimler Benz was allowed to take back production in 1950.

Assembly was moved to its new home at Gaggenau (the world’s oldest automotive factory) on the western side of the Black Forest where it stayed until 2002. From there it was once again moved to Worth am Rhein on the French border.

The early models sported a stylised bull’s head as a logo on the bonnet and it was not until 1953 that this was displaced by the Mercedes three-point star.

Albert Friedrich was an aero engineer, yet this did not prevent him from thinking in the most practical terms when it came to building the Unimog as a farm vehicle from the ground up.

From the outset it had 4WD, three PTO points, a diesel engine, six speeds and lockable differentials at both ends. Costs were contained by using flat steel panels and pressed steel axle casings, with both the front and rearing being the same component.

The original engine was the OM 636 rated at 25hp. However, in a Nebraska test of 1957, it was shown to produce 28hp over a two-hour stint at full load, the maximum horse power being calculated at a shade under 30.

The motor had been designed for a variety of applications including cars and was a four-cylinder inline indirect injection unit.

It was not uprated in the Unimog until the late 50s, although more powerful petrol engines were available as alternatives from 1955 onwards. The Unimog 30 was not directly replaced but evolved into the 40 series from 1953 onwards.

Since those early days, the Unimog has grown into a vehicle for all purposes and seasons and shows no signs of becoming obsolete or redundant. It was a unique vehicle upon its inception and remains so to this day.