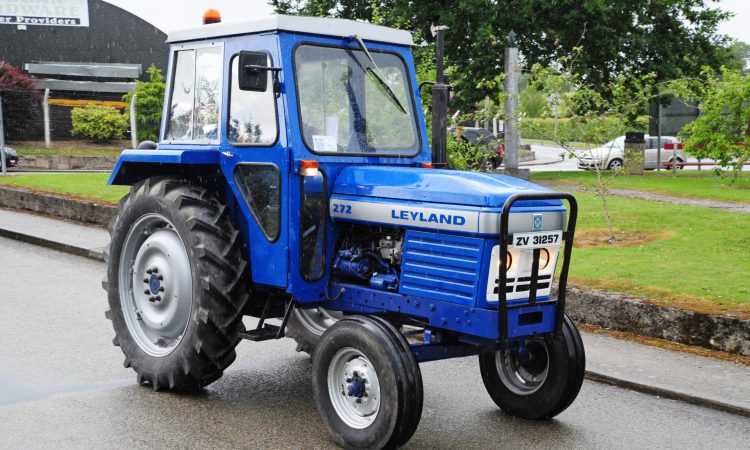 Leyland tractors were never one of the biggest players in the market, yet the brand retained a loyal following even towards its final days, despite it being in business for less than 35 years.

The company had its roots in the pos- war push to increase food production in the UK.

The government had approached the Morris Motor Company, then still under the stewardship of Lord Nuffield, and asked that it turn its resources to producing a tractor.

In May of 1946, the first of one dozen prototypes was ready and undergoing trials.

By the end of the year, the model was declared ready for production, yet it would be over a year before it started rolling off the production line due to steel shortages.

It eventually became available in early 1948 and was an immediate success.

Four years later, Lord Nuffield’s various car making concerns were merged with the Austin Motor Company to form British Motor Corporation, or BMC as it was more widely known, and the tractor line was part of the deal.

Government interference was never far away, and in 1962 the production of tractors was transferred to Bathgate in Scotland to help ease the unemployment caused by coal mine closures in the region.

It was joined by Pressed Steel, supplier of body panels, and Rootes Motor Company, which produced the Hillman Imp over at Linwood.

Launch of the Leyland livery

Even further rationalisation within the motor industry saw BMC merge with British Leyland and tractor production became the responsibility of the Bus and Truck division.

Come 1969, the Nuffield tractor range was relaunched as Leyland Tractors in the bright blue livery we have come to associate with the name.

While the intent to relieve unemployment in southern Scotland was a noble cause, in practice, the sudden transference of miners to production line operatives was never going to go smoothly, and the factory was rarely remarked upon for its exemplary industrial relations.

The management also had other concerns. These included the expense of bringing parts up from the midlands where the component manufacturers had resolutely stayed put, despite the incentives to get them to move north to be closer to their major customers.

And so it was, that by the mid-70s the government decided that something had to be done – that something culminated in the Ryder Report, a drastic restructuring of the company, nationalisation, and the eventual appointment of Sir Michael Edwards as chief executive in 1977.

Soon afterwards, Margaret Thatcher was elected as prime minister in the UK. Her disdain for unions, nationalised industries and, it was often alleged, industry itself, was well known.

It wasn’t long before British Leyland started to feel the chill winds of major change around its ankles.

Rationalisation of the corporation

Having attended to the branding and manufacturing of cars, the new broom turned to the Bus and Truck division and casually sold the tractor manufacturing part to Charles Nickerson of Gainsborough, with no public consultation of either the production line staff or government.

This in itself was not without precedent. Nickerson had already purchased Aveling Barford from British Leyland in 1979 without controversy.

Yet that was a local deal, a wealthy farmer buying a mainly agricultural asset from a diverse corporation in the throes of streamlining its operations.

The purchase of the wheeled tractor line, and its relocation to a rural county nearly 300 miles away, with the direct loss of 900 jobs, was in a different league altogether.

Naturally this did not go down too well on the factory floor and a work-in was organised which successfully staved off the sale for some time.

The issue was also taken up by the local MP, Tam Dalyell, a noted thorn in the side of the Thatcher administration.

Throughout late 1981, Dalyell repeatedly raised the question of the sale in parliament, attacking it on two main fronts.

The first was the effect that it would have on jobs in his constituency, claiming that post-sale, there would be 26% unemployment rate.

He also questioned the probity of the sale itself, using such words as “rip-off” and “commercial treachery”, while also aiming his venom at the management who he accused of “having their snouts in the trough”.

Further, he brought into question the disposal of public assets, noting that the Rootes factory in Linwood was sold of for less than £10 million when its book value was nearer £200 million.

He also prophetically raised the spectre of the de-industrialisation of Britain, a contentious subject at the time and one that is hardly settled now.

A tale of the times

When put under the spotlight the sale might be seen as a microcosm of that troubled era – an ageing product range suffering a lack of development funds, for whatever reason, being swept away rather than nurtured and brought up to date.

The arguments as to whether this was the correct approach are purely political, but it is certain that Tam Dalyell saw the sale as a step towards closing down tractor production in the UK, and, in hindsight, he had a point.

The sale was eventually finalised with all the assets, including the production machinery and 600 completed tractors, trucked down to Lincolnshire for the grand total of six million pounds.

This price would appear to have been excellent value for the purchaser as the final figure roughly equates to the retail value of those 600 tractors.

In addition, he acquired all the tooling, a multitude of spare parts and the full rights to continued production.

Still on the case

The indefatigable Tam Dalyell did not give up easily. In a heated exchange with Edward Leigh, MP for Gainsborough and Horncastle, in May of 1984, he forcibly insisted that the tractor line had been “stolen” from the taxpayer and his constituents.

Edward Leigh countered by noting that the deal had subsequently been cleared by the Public Accounts Committee and that two new models were planned.

These would appear to have been based around the ’98’ series engine which was still in production at Bathgate.

Yet that was not all that emerged. Leigh also let slip that “in 1981, Track Marshal of Gainsborough learnt that the British Leyland tractor line at Bathgate was doomed”.

The inference being that Leyland management did not seek a buyer as is often cited, instead, they were probably planning on simply closing down tractor production altogether before Charles Nickerson stepped in to buy it.

Looking back it is not hard to see why the company had decided on that course. In 1981, Massey Ferguson brought in the 600 range to replace the 500 models and Ford launched the ’10’ series.

The latter had also introduced the TW’s two years before and Leyland had nothing to match this sudden increase in power, or general investment, by the two giants.

Charles Nickerson would have been as aware of this as anyone else, so the promises of further investment and new models sound somewhat hollow now.

Indeed, Marshall went on to assemble only around 1,000 new tractors in total before finally calling in the receivers in September 1985, little more than a year after the local MP had roundly defended it and the acquisition of the Leyland Tractor line.