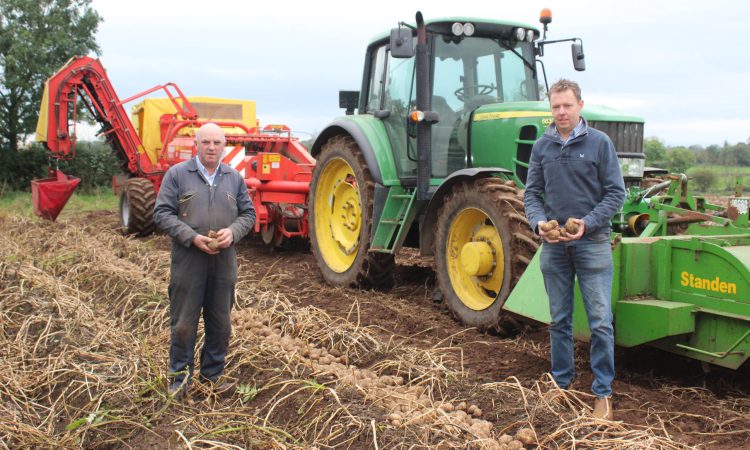 Potato packer Wilson’s Country is confirming that approximately half of this year’s maincrop is now out of the ground.

However, growers throughout the country are reporting significant variations in yields.

“The weather has remained good over weeks and ground conditions have held up tremendously well,” explained Wilson’s agronomist, Stuart Meredith.

In fact, the weather has been so good that growers have had a fair amount of difficulty getting crops burnt off. Crops just wanted to keep on growing.”

According to Meredith, crop yields are in the range 10t and 23t/ac.

He explained: “Crops were affected by the dry spell back in July and yields are back accordingly.

Disease pressure remained reasonably low throughout the growing season; it’s now a case of getting crops in store as quickly as possible.”

According to the Wilson’s Country representative, the warm and reasonably dry period through late August and early September provided some growers with an opportunity to achieve some more bulk.

He said: “As a consequence, they didn’t kill crops as early as would normally be the case.

Crops were actively growing and haulms have been difficult to kill, simply due to the good growing conditions through September.

“Crop yields to date have been very variable as a result of the drier than average summer. Yields on fields badly affected with drought stress are reported as low as 10t/ac, yields on heavier land that received irrigation have been as far as 23t/ac,” Meredith continued.

Some of the drought-stressed fields had a soil moisture deficit of over 300mm, according to Meredith.

Where varieties are concerned, growers have confirmed that, for the most part, maincrop whites, such as Cultra, have been performing well,” he added.

Maris Piper crops, on the other hand, produced high numbers of tubers, but didn’t fill them out to their full potential.

“As a a consequence, piper yields could be described as being 2t to 3t/ac below average,” Meredith explained.

Damper conditions of late have been welcomed by many growers in Co. Down and Ireland’s east coast, as conditions in that part of the world have been quite dry for lifting up to this point.

There is a requirement for a certain amount of soil to cushion the potatoes over the harvester, in order to reduce the risk of bruising.

If conditions are too dry, then the soil immediately falls through the first web on the harvester and the potato isn’t protected from any knocks it may be exposed to over the machine.

“Demand for potatoes has been steady through the summer months and this theme has continued through September and into October,” Meredith concluded.