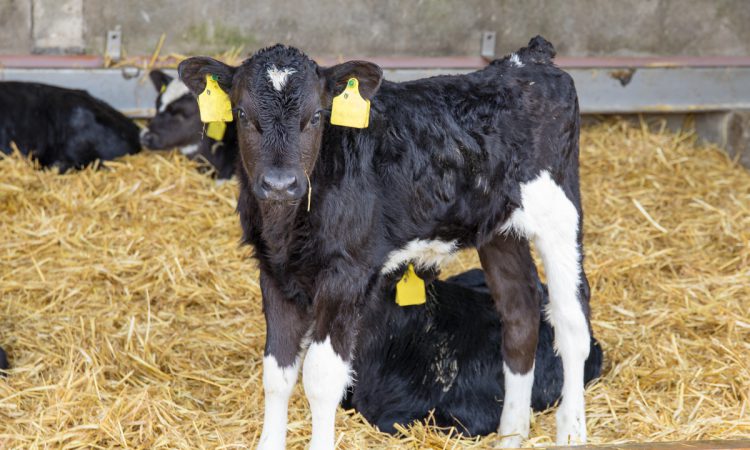 During the webinar the importance of the calves’ environment was highlighted, along with the benefit of automatic feeding systems on dairy farms.

Dr. Cooke began by outlining research which has shown that calving heifers at 24-months offers many benefits to farmers.

These heifers have a higher level of fertility, milk yield, lower somatic cell count (SCC) and last longer within the herd. All of which makes these heifers more profitable.

Heifers calving at 24-months-of-age are more likely to make to a third calving.

Dr. Cooke highlighted that a heifer calving at 24-months-of-age is not profitable until halfway through the second lactation. So, ensuring that heifers make it to a third calving is vital, for ensuring they become profitable.

For a heifer to calf at 24-months, growth targets need to be set and reached throughout the rearing period.

Heifers need to be calving between 85-90% of their mature cow weight, this is important to reduce calving difficultly and is linked to the future fertility of the heifer.

To ensure that heifers meet the target set and are on the right growth cure you need to start at day one.

The first target to hit is to ensure they double their birth weight by weaning and the next one after this is first breeding.

This means calves need to have a average daily liveweight gain (DLWG) from day one of 0.8kg/ day. That figure will vary based on the mature weight of cows in your herd.

Commenting further, Dr. Cooke stated: “We need to ensure that heifer get off to the best possible start, with some critical areas to focus on for success.

“These include nutrition, health and the environment of these young animals. Calves use their feed in many ways, they firstly use it to maintain normal body function, to keep warm and fight disease. The energy left over will be used for growth.

“This means a healthy warm calf will be using its feed more efficiently compared to sick cold calf.”

The primary source of feed for a calf during the first three to four weeks of life is milk as concentrates intake will be low.

Feeding calves more milk does not only help them to maximise their growth potential, but it also helps them fight off disease.

Heifer calves offered more milk were also shown to have higher yields in their first lactation, according to Dr. Cooke.

Dr. Cooke stated: “That is very easy to see for the same amount of feed as the animal ages you are going to get less growth back out. So you need to be taking advantage of this high feed efficiency stage.

Dr. Cooke highlighted research carried out in the UK ”found that giving calves access to larger amounts of milk at an earlier age increased their weight gain”.

The study looked at a group of calves restricted to 5L/day and compared them to a group that had excess to ad libitum milk.

Dr. Cooke explained that: “Traditionally the amount of milk offered to calves is slowly increased than they are rapidly weaned.

“But what we actually need to be doing is feeding them more from an early age to support their health, growth and development. With weaning needing to be done more gradually over three week period.

“First the seven days of life after birth calves need to be drinking at least 5L/day, after seven days calves should be offered a minimum of 6L/day.

”Calves should be fed at least 6L per day spaced over two feeds, along with concentrates. If calves are receiving more than 6L a third feeding time should be introduced.”

Dr. Cooke stressed that along with the milk access to concentrates, forage and water is important for young calves for rumen development.

Fresh concentrates and water should be offered to young calves from an early age to ensure they continue to grow post weaning.