A permanent crisis instrument must be implemented in the dairy sector to avoid future volatility.

This was the message from Sinn Féin MEP Matt Carthy when he called on EU Agriculture Commissioner Phil Hogan to take action to stabilise the sector.

Speaking from Brussels, Carthy said: “This week I met with the President of the European Milk Board (EMB), Romuald Schaber, to discuss implementation of their proposals for permanent crisis instruments to address future price volatility.

In Ireland, price volatility is the difference between a farmer’s survival and being wiped out of the market.

“The traditional family farms that characterise our rural communities don’t have the luxury of just absorbing losses one year and making up for them the next, as larger producers often found in other EU agricultural countries can.

“This means that robust and permanent programmes and instruments at EU level are needed to protect the livelihoods of dairy farmers,” he added.

“The proposals I discussed with the EMB this morning could be an important step towards protecting dairy farmers in the future. The Market Responsibility Programme would see a system whereby a Market Index would monitor prices, trends and production costs simultaneously.

“In the event that the Index points to an imbalance, a voluntary reduction in production scheme similar to the one currently being run by the European Commission would be triggered.

A carefully balanced system of voluntary reduction payments and maximum caps on production, for those not participating, would ensure the dairy market would avoid descent into the type of crisis we witnessed over the last two years.

“The EMB’s proposals that a mixture of EU Crisis Aid Funds, sanctions on large over-producers and temporary levies, as a means to provide the funds so that farmers can always be guaranteed fair prices for their products, will be controversial in some quarters but warrant consideration,” said Carthy.

“The fact that these innovative proposals are being presented by the European representative organisation for dairy farmers shows the willingness of a sector to adapt in order to ensure the survival of all its members.

“So far, the Commissioner’s response has been a strange mixture of temporary smoke screens and a ‘wait and see’ attitude.

“Many farmers have already had to exit the market, and many more work in fear of the next crisis that might finally destroy them. If we are to ensure that every farmer stands a chance of survival, then permanent programmes are necessary.”

“I have written to Commissioner Hogan asking that he seriously consider these and all other proposals to ensure a set of sustainable measures is put in place before it’s too late for many Irish dairy farmers.” 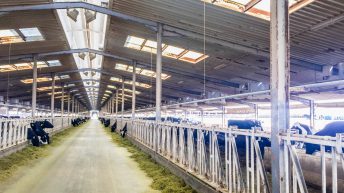 Video: The dairy farm in the desert producing 11 litres of milk every second