A cluster at a meat plant in Co. Antrim and an increase in testing have been blamed for making Northern Ireland's rolling Covid-19 rate the highest of any part of the UK and Ireland.

The update this evening (August 27) comes exactly six months after the first case of Covid-19 was confirmed in the region.

The cluster, at Cranswick's plant in Ballymena, Co. Antrim, saw at least 35 people test positive when it was first announced on Thursday, August 20. The cluster is thought to be the largest publicly announced so far in the region.

Northern Ireland Health Minister Robin Swann described the outbreak as “significant and difficult” and said a "further, smaller number" of positive cases had been confirmed among contacts.

The factory is one of the region's main meat processing sites for pigs.

The Ulster Farmers’ Union (UFU) said it had been involved in talks with Northern Ireland ministers, government officials, and pig processors over the past few days to prevent the closure of the pig processing plant from developing into a major crisis.

A week on, the Department of Health's Current R Number estimate released today (August 27) showed the R is currently estimated to be between 1.0 and 1.6, with the actual figure thought to be 1.3.

Minister Swann said the numbers had given him "cause for concern" and said the virus caused the "biggest public health crisis in a generation".

The statement said the figures had been "strongly influenced" by the factory outbreak. 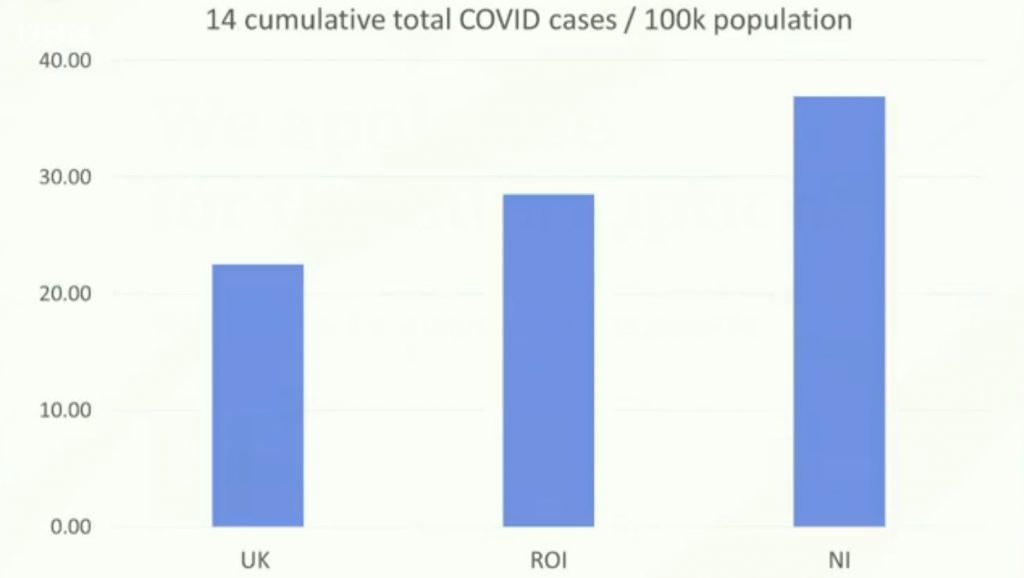 Several clusters have also been reported at meat plants in the Republic of Ireland; they include ABP's plants in Clones, Co. Monaghan, and Cahir, Co. Tipperary, as well as a mushroom processing plant in nearby Golden.

It also showed that a further 14 people had been admitted to hospital over the last seven days. With 17 people now being treated for Covid in the region's hospitals.

A statement from the Department read: "The above indicators generally show a further increase in transmission in the last week.

The seven-day rolling average for new cases has increased as has test positivity, though both are likely to be strongly influenced by a meat factory outbreak in Mid and East Antrim.

"14-day cases / 100,000 remain higher than the UK as a whole and the Republic of Ireland. This is likely to be partly explainable by increased testing in the context of the Test / Trace / Protect service.

"However, there is also likely to be a more widespread increase in community transmission which is a matter of significant concern."

However, the region's chief scientific advisor officer Prof. Ian Young said during this evening's briefing that an increase in testing was only part of the picture.

But the amount of testing has increased only four-fold during the period that cases have increased by 15 times, so it at best is only a partial explanation for the much larger number of cases that we are currently seeing.

"No matter what way you look at it, this is not a good situation," he added.