On large, heavy tractors, how do you juggle axle loads to prevent wear, protect the soil and maximise traction? Has Fendt the answer?

Previously, axle load distributions on a tractor (when using big implements) were altered by the use of front weights, wheel weights or lashings of other ballast.

Fendt says that it has the ultimate solution – to make best use of all that weight. Its so-called ‘VarioPull’ system “sets the ideal load distribution between the tractor’s front and rear axles, by using the existing weight of the whole outfit to better effect”.

It supposedly does this by moving the lower lift-arms (or drawbar) closer to or further away from the tractor – as needed (depending on the conditions).

Usually, the lower lift-arms are attached to the rear of the tractor, whereby they can only move up or down – in an arc. In the ‘VarioPull’ scenario, the lift-arm assembly (the entire hitch) is attached to the tractor (underneath, of course) midways along the vehicle; it is hinged at that point (enabling the arms to swing up or down).

There is a telescopic ‘tongue’ – or carriage – within the assembly. This can slide in or out – effectively moving the hook-ends of the lift-arms (or hitch) closer to or further away from the tractor.

The telescopic ‘tongue’ can move through a distance of 0.8m – which is significant.

Moving the ‘tongue’ in or out (in the field when pulling a heavy, power-sapping implement) alters the amount of weight transferred to the tractor’s front axle – or so claims Fendt.

Fendt reasons that ‘VarioPull’ can enable the operator to use less front ballast – thus reducing the overall weight of the outfit – without losing traction. Carrying less front weight about also makes for safer and more comfortable road driving.

The integrated change-over system allows the use of drawbars, ball couplings or lower link hook-ends.

There’s an app for that…

Thanks to an integrated measuring system, the operator is kept abreast of the telescopic unit’s position; he or she can adjust it from the driver’s seat or, optionally, via an app. Yes; you did read that correctly – we did say ‘app’.

And you thought you had enough apps… 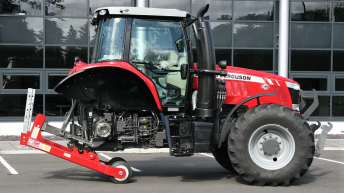