Now it’s official; the company has released further details – ahead of a major launch at next month’s Agritechnica show in Germany. Here, in this article, we focus on the new 8R models. 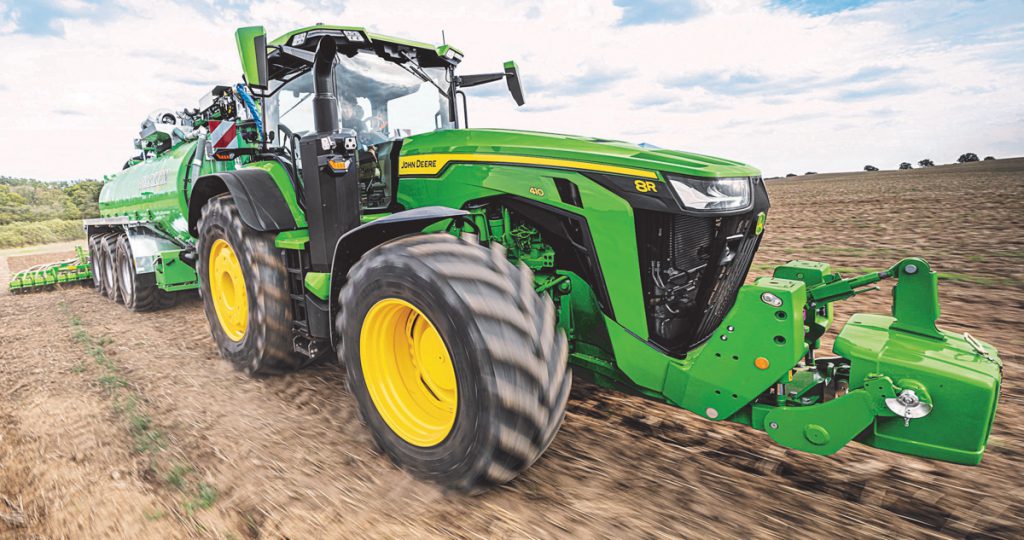 Most notably, John Deere says that it is the first farm equipment manufacturer to produce a range of 'standard' tractors with three different drive concepts. Alongside the 8R Series wheeled tractors, there are twin-track 8RT models as well as brand new 8RX versions (with four tracks).

According to John Deere, the 13-model range that will be available in the UK and Ireland comes with "a new cab that offers luxury car style comfort" and the CommandPRO joystick option. 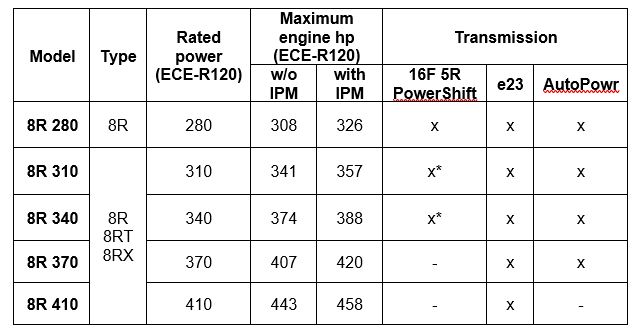 * This transmission is not available on 8RT and 8RX models. Data source: John Deere[/caption]

The tractors' distinctive appearance has apparently been designed in cooperation with the BMW Designworks studio in California (US).

According to John Deere, the new 8RX Series "provides by far the lowest contact surface compression in this class", along with a transport width of less than 3m and a 40kph top (road) speed. The tractor also "minimises any noticeable soil scuffing when turning". 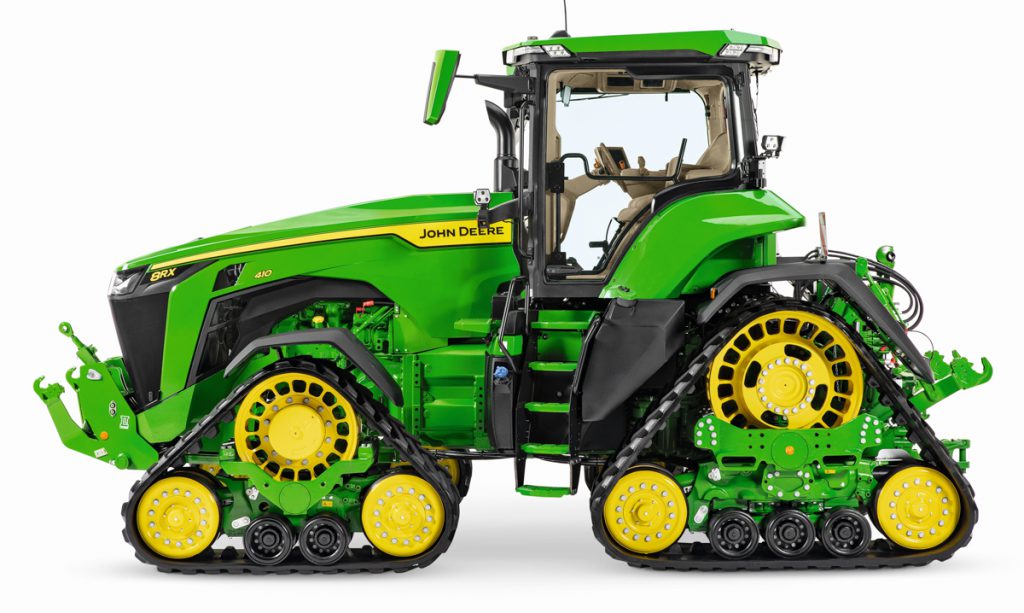 Compared to two-track designs, the 8RX is claimed to be "significantly more stable on hillsides". John Deere says that it also "performs well in more challenging soil conditions, due to its superior self-cleaning ability". 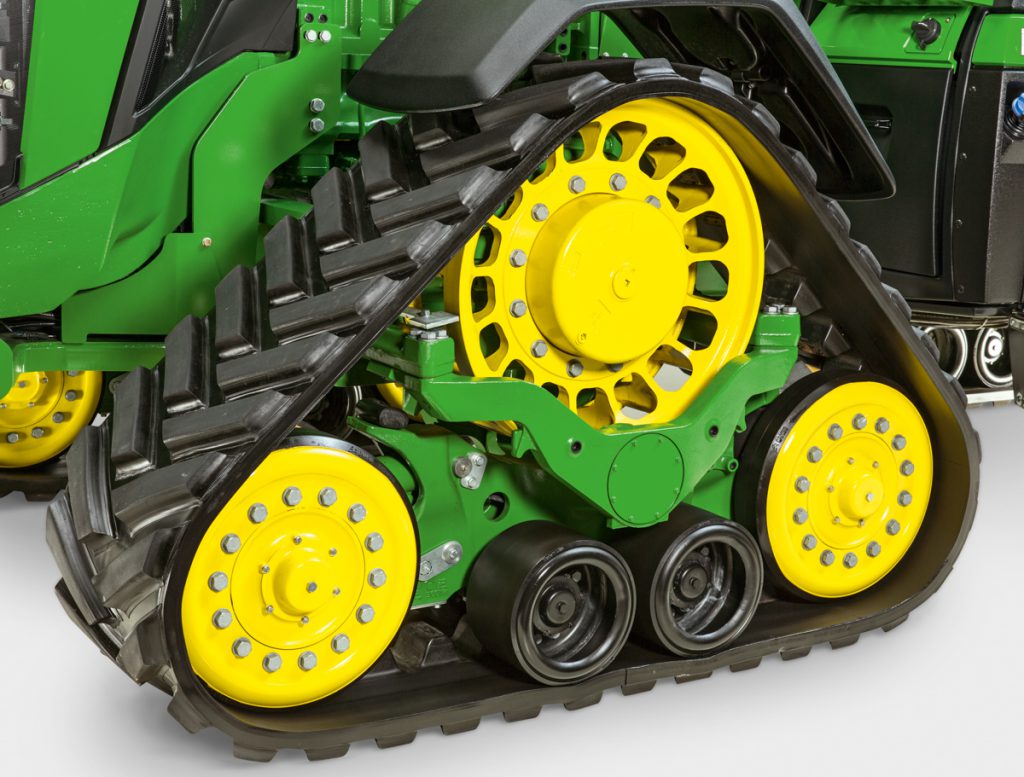 Meanwhile, all 8R Series tractors retain John Deere's existing 9L PowerTech PVS and PSS engines, with an increase of 40hp on the 8RT 410.

Established transmission options include the 16F 5R PowerShift, which is now available up to the 8R 340 model, the e23 (with Efficiency Manager) and the stepless AutoPowr.

The rear brakes have been "massively reinforced" - so much so that John Deere now claims that front brakes are no longer necessary (even at 50kph), although additional front brakes can still be ordered.

The cab is also home to a larger integrated fridge and, claims the manufacturer, a 60% more efficient 360° LED lighting system. 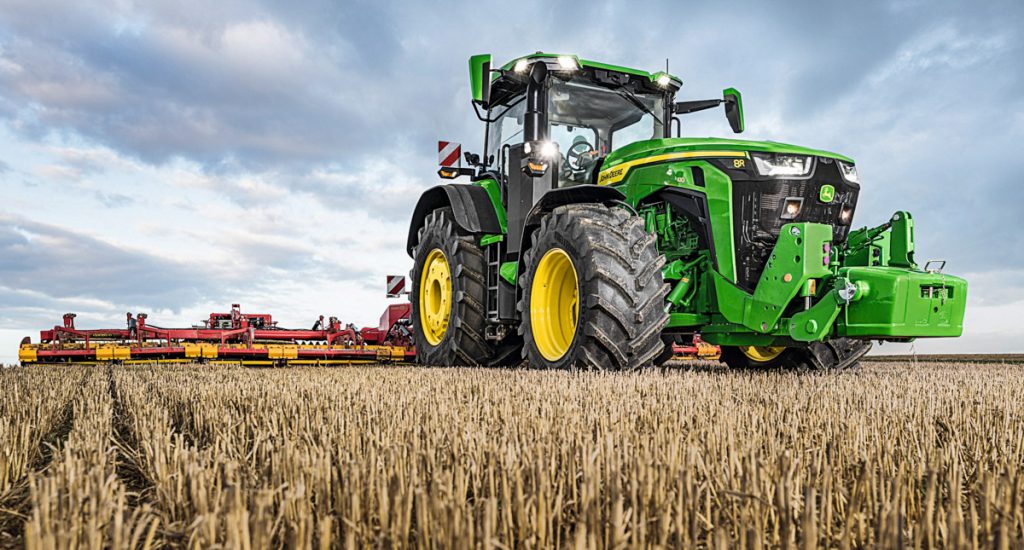 Further cab improvements – apparently prompted by customer requests – include a wider entry and lower-placed door handles, as well as a self-cancelling indicator. In addition, the air-conditioning system has been relocated under the cab.