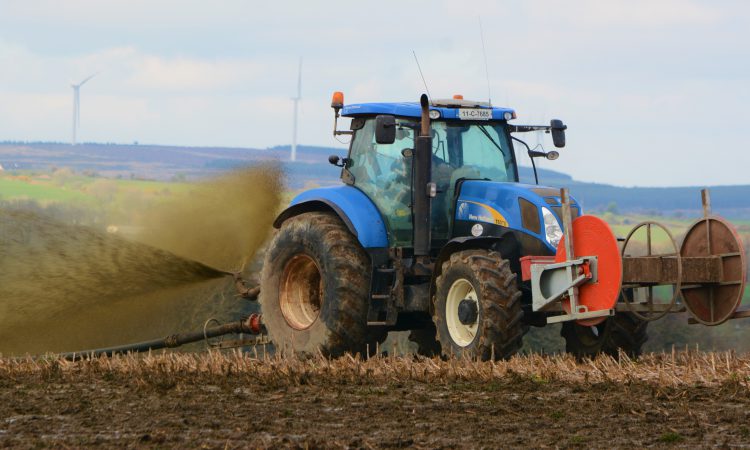 The figure includes application through chemical fertilisers, slurry spreading and animal excretion and is proving costly both in terms of environmental impact and fertiliser costs.

The report, which was carried out by the Agri-Food and Bioscience Institute (AFBI) and based on 2017 figures, showed that when the region’s entire food system was included (for example, food and leather imports and fish landed) the surplus reached as high 10,300t of P.

‘A loss for farmers’

That year, researchers found a total of 1,530t of P was lost to water, with 62% of this originating from agricultural sources.

Lead author Dr. Donnacha Doody explained the findings represented an “economic loss” for farmers as well as having the potential to impact on water quality in the future.

Also Read: Could NI’s AD industry be used as a pilot for nutrient management?

The report also highlighted the findings from recent government soil sampling schemes, which showed 38% of the region’s agricultural soils had concentrations of P above the optimum.

Speaking at the launch of the report, Dr. Elizabeth Magowan said: “This report will contribute to better management of P as an economic resource for Northern Ireland.

“The better we manage P, the more efficient our agricultural production will be, as well as protecting our rivers and lakes.

A reduction in P imports to Northern Ireland will boost agricultural productivity and save money for farmers and deliver clean water for biodiversity, drinking and recreation, which are central to the wellbeing of our society.

“A key component of moving forward with the management of P will be to continue to work with our farmers to provide them with the tool and information required to improve P use efficiency.”

The report was a result of a 12-month process, carried out through the RePhoKUs project, which involved extensive engagement with agri-food, environmental and government organisations across Northern Ireland.

The RePhoKUs project is a collaboration between AFBI, Lancaster University, Leeds University, University of Technology Sydney, and Centre for Ecology and Hydrology.

It aims to develop strategies that reduce the vulnerability of UK farming to future P scarcity.

Lead author on the report Dr. Donnacha Doody added: “The involvement of people from the agri-food industry, NGOs [Non-Governmental Organisations] and government was vital to the success of this work, providing valuable insights, solutions and knowledge to identifying realistic ways to transform P management in the Northern Ireland food system.”

To achieve the dual objectives of productive agriculture and clean water, stakeholders identified the need to minimise P imports into Northern Ireland in fertiliser and animal feeds while also exploring opportunities for manure processing and development of new P fertiliser products for export.

It concludes that in order to improve the economic viability of manure management and export, a holistic approach needs to be taken, that accounts for its value; as a fertiliser, for carbon sequestration and for energy production.

P is an essential nutrient for the future of the agri-food industry; however, on a global scale, it is a finite and scarce resource, with the vast majority of the known deposits located in Morocco and China.

As such, agriculture is completely dependent on imports of P in fertiliser and feed to support food production in Northern Ireland.

It’s also a pressing environmental issue, as excessive inputs to lakes and rivers causes eutrophication which has a significant impact on biodiversity, drinking water quality and recreation.