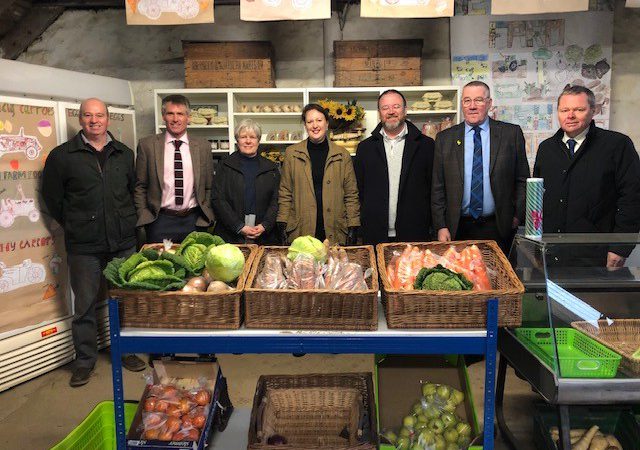 Trade, standards, labour and funding were all on the agenda as the recently-appointed Parliamentary Under Secretary of State for Defra, Victoria Prentis, met with NFU Scotland on Thursday (March 12).

The visit was hosted by Morag and Jackie Rennie, who run a successful farm and farm shop at Mill of Crimond near Fraserburgh, Aberdeenshire, with the Minister accompanied by local MP David Duguid.

Farming Minister Victoria Prentis said: “It was a pleasure to visit Crimond Farm and find out more about their work – from producing free-range eggs with the highest standards of animal welfare, to running a successful farm shop and leading the way in renewable energy projects.

Scottish farmers make a vital contribution to the country and we want to work together as we transform our farming sector to be more productive and sustainable in the future.

NFU Scotland president, Andrew McCornick, who attended the meeting said: “As someone with such strong farming connections, the Minister clearly recognises the work and dedication that goes into producing food and epitomised by today’s fantastic hosts.

“With trade talks underway, we shared with the Minister our firm belief that the interests of domestic food producers must be front and centre when it comes to negotiations.

It has taken a lot of work from industry and Government to build the world-leading standards that we have. It is now essential that the Government protects these against imports which do not match us for traceability, welfare, food safety and environmental benefits.

“We believe the UK Government has a responsibility to incentivise locally and sustainably produced food, that heads off food security concerns, rather than a reliance on imports in an increasingly unpredictable and volatile world.

“Our standards are not only for the protection of consumers in the UK and the enhancement of the environment.

“They are representative of society’s view on how food production should happen anywhere in the world. To lower them and accept food produced elsewhere to poorer standards runs the real risk of promoting the very things we believe are wrong and don’t allow here.”

McCornick said he reminded the Minister just how much the future fortunes of Scotland’s farming, food and drink sectors depend on access to non-UK labour.

“The union is on record as stating that the UK Government’s proposals for migration and the introduction of a points-based system (PBS), if unchanged, will fail to provide enough options for seasonal and permanent non-UK workers to come and work in Scotland’s vibrant food and farming sectors, undermining its sizeable contribution to the Scottish and UK economies,” he said.

“We are also ambitious as an industry, and we shared with the Minister our recently-published policy vision for the future, launched last week.

Our short and longer-term proposals recognise Scottish agriculture’s fundamental role in emissions reductions and carbon sequestration, whilst retaining our ability to profitably produce food to the highest of standards.

“To deliver NFU Scotland’s policy proposals for 2021 to 2024, a multi-annual, ring-fenced financial framework must be established through the Agriculture Bill passing through Westminster. We hope to have the Minister’s support on that.”