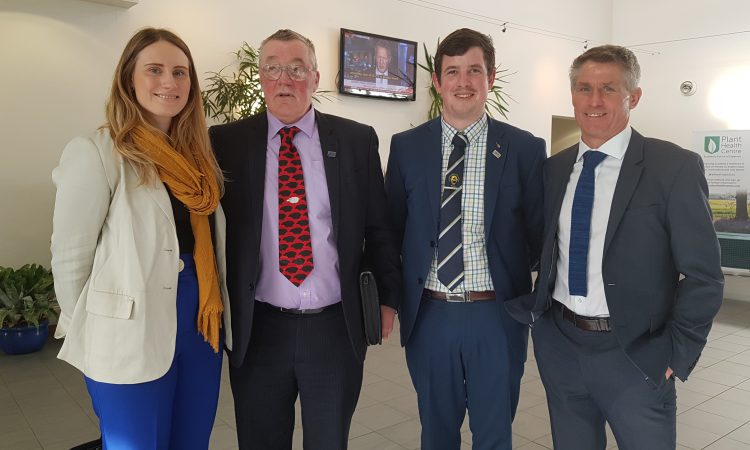 Defra and the Scottish Government were pitted face-to-face at an NFU Scotland debate allowing members to hold both to account.

The debate between the Secretary of State for Environment, Food and Rural Affairs Michael Gove and Cabinet Secretary for Rural Economy Fergus Ewing took place on Monday (February 18).

Both politicians were taken to task on a range of topics affecting Scottish farmers and crofters – none more so than the threat of a ‘no-deal’ Brexit.

The Ministers were asked about what contingency plans had been put in place in the event that the UK does come crashing out of Europe.

The pair were also pressed on assurances over the level of migrant labour that could into Scotland when we leave the EU.

Members highlighted the devastating impact a loss in this essential workforce will have on all sectors of Scottish agriculture.

Fergus Ewing said he recognised the difficult situation the industry is facing and said the pilot scheme (SAWS) was wholly inadequate. The pilot will see 2,500 visas issued for workers to come into the UK.

NFU Scotland pushed the Ministers to make commitments on funding for future agricultural support going beyond 2022 and for the quantum of funding to retained and ringfenced.

Speaking after the debate, NFU Scotland President Andrew McCornick said: “The final date for Brexit is getting closer and closer every day and we do not have a solid deal signed off by everyone involved. Scotland’s farmers and crofters need robust contingency measures put in place for a ‘no-deal’.

In particular, we need to see the UK Government committed to defending the interests of our sectors in the event of a ‘no-deal’ outcome, by ensuring that necessary tariffs are applied to third-country imports and financial assistance is available where necessary.

“Farming is not an industry you can switch off and on like a tap – our members plan months and years in advance – and we need our politicians to give us the certainty that will allow us to do so.

“Scottish farmers and crofters need to know what environment their businesses will be operating in come March 29.

“Defra has committed to maintaining funding up to 2022 but Scottish farmers and crofters need more than that. We need assurances from Defra and HM Treasury that the quantum of the funding will be maintained beyond that point.

“Future support is critical for every sector in Scottish agriculture, which is why it is so important that all sectors and regions are fairly funded. We also need a strong commitment from Scottish Government that any future funding will be ringfenced to agriculture in the future.

“We, therefore, need commitments and cooperation from both governments in order to guarantee the strongest possible agricultural industry in Scotland.

“I was pleased to see further discussion on migrant workers and the inadequacy of the current pilot SAWS scheme at today’s debate.

“NFUS has been lobbying hard on this and we continue to highlight the need for a huge increase in the 2,500 workers currently being offered on the scheme.

Even with a deal, the UK’s soft fruit industry would require at the very least 10,000 seasonal workers and this is not even including the tens of thousands of workers needed in the livestock and milk sectors.

“This debate has highlighted the continued need for our constant lobbying to defend our Scottish agricultural industry.”